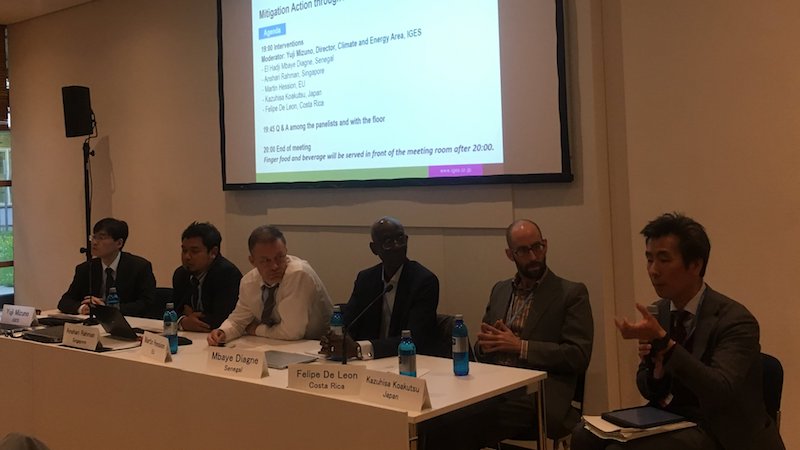 By Soila Apparicio and Megan Darby in Bonn

Men outnumber women by two to one on panels at this month’s UN climate talks, according to Climate Home News analysis.

Of the 39 side events with announced speakers at talks in Bonn, which started on Monday, just one third have an equal gender balance or majority of women on their panel. 65% of all listed speakers are male.*

A spokesperson for Climate Focus, who helped organise an all-male panel on Tuesday, recognised the need to be more thoughtful about representation in the future.

“The issue was raised between the co-organisers after the meeting and there had been a clear position from everyone that this has to change in future events,” said Climate Focus’ spokesperson. “In the future it will be higher on our radar not to happen again.”

Kentaro Takahashi from the Institute for Global Environmental Strategies (IGES) said that they “very much regret that all speakers and panelists were male”.

“In the preparation stage, we have considered the regional balance, gender balance as well as availability of speakers, so that we can ensure a discussion with different views from different regions. But we now recognize our thought on gender balance was not enough,” Takahashi said.

The IGES stated that they would commit to securing the gender balance when they organise a side event in the future.

At a side event organised by the World Meteorological Organization (WMO) on monitoring greenhouse gases on Wednesday evening, there were five male speakers and one woman. Session moderator Florin Vadu, a manager at the UN climate change secretariat (UNFCCC), told Climate Home News his department was 80% women. “All are women working under me, but they [the organisers] wanted the boss and the boss happened to be a man.”

Neither he nor fellow panellist Han Dolman, a researcher from the Free University of Amsterdam, considered the gender balance when deciding whether to join the event.

“You see it depends on my agenda,” said Dolman, cautiously “but it is something when you organise a panel meeting you can take into account”. The WMO was not immediately available for comment.

Finnish official Paula Perälä was fairly relaxed about her status as the only woman on the panel, coming from a delegation where the balance skews the other way. “They are experts in their field,” she said.

Her colleague Outi Honkatukia agreed, noting the subject of the panel was interpreting data rather than representing competing interests. “I struggle to see the gender dimension when we are talking about systematic observations,” she said. “I see the importance of that when you are talking about policy.”

The UNFCCC responded by saying “the secretariat is committed to gender equality. When considering applications to hold side events, we give preference to events that have had gender balanced panels in the past. At past [conferences], when staffing has permitted, we have undertaken surveys of side events. For events that the secretariat organises or is involved in, we make every effort to improve gender balance consistent with our executive secretary’s commitment under the International Gender Champions initiative”.

Susy Wandera of Sustainable Environmental Development Watch (SusWatch), who helped organise a panel on poverty reduction where two of the 11 speakers were women, suggested that it was up to partner organisers to make the decisions “bearing in mind national circumstances and sensitivities” on whether to include female speakers.

“Kenya’s UNFCCC focal point who spoke is male, his boss male, and the cabinet secretary, also male,” said Wandera. “That is not in our control.” She said none of SusWatch’s female representatives were able to travel to Bonn to speak on the panel.

“Parity of gender in the climate arena is still going to be a challenge”, said Wandera.

Despite their relative underrepresentation at UN talks on climate change, women are disproportionately affected by its effect. That was the topic of discussions during a Wednesday afternoon workshop on gender. But here too balance was an issue. But this time it was a noticeable lack of men in attendance, with just eight men in an audience of roughly 100, according to youth activist Alex Lutz.

“Would be great to have more of them joining the conversation,” she tweeted.

Cant help to notice that there are only 8 men out of 100 participants taking parts in the #Gender Workshop at #SBI. Would be great to have more of them joining the conversation #SB48Bonn #WhereAreMen @CliMates_intl pic.twitter.com/FNvEoeA0fM

* These figures do not distinguish between people who may not identify as male or female, or either.

The article was amended, the spokesperson for Climate Focus was originally attributed to the Global Public Policy Institute (GPPI), another of the co-organisers.