Political deadlock has put $1bn in green projects on hold 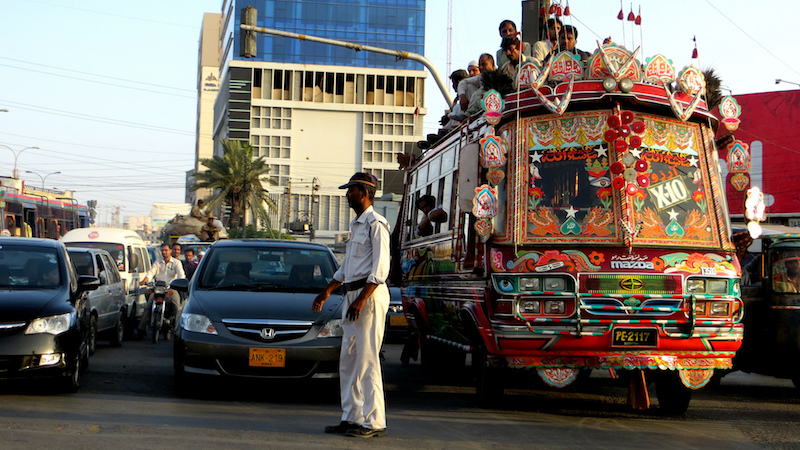 “People are basically hanging from the doors or sitting on the roof [of buses in Karachi] because demand is so high and the service is so poor”(Photo: Wasif Malik/Flickr)

Project developers bidding for $1.1 billion from the Green Climate Fund are looking anxiously for board approval in Bahrain this week.

The fund’s last board meeting in July collapsed with no agreement on 11 project proposals, worth nearly $1bn, nor on how to raise a fresh round of contributions from rich countries. Since then, 10 project bids have been added to a packed agenda, and one deferred.

David Margonsztern, proponent of a green transport plan for Karachi, told Climate Home News something had to change.

“We definitely hope that the situation from the last board meeting won’t repeat itself again because that would be a disaster, not only for this project but for all projects that are being proposed,” he said.

His project, overseen by the Asian Development Bank, would bring a fast bio-fuelled bus service, bicycle lanes and green spaces to a congested 30km corridor in Pakistan’s biggest city.

Construction could start in 6-8 months, Margonsztern said, and “significantly improve” life for residents. “People are basically hanging from the doors or sitting on the roof [of buses] because demand is so high and the service is so poor,” he said: “By introducing bus rapid transit, it will be much better, much more efficient.”

The GCF offered attractive financial terms, but its process was “very complex and cumbersome”, he added. “If at the end it was all for nothing because of political reasons, because the board cannot get its act together, of course it will be very frustrating.”

Other initiatives in line for support include geothermal energy in Indonesia, drought-proof farming in El Salvador and green urban development in Shandong – the first GCF bid from China.

If all the project bids are approved, it will take the value of funds committed to $4.6 billion. That may trigger a fundraising drive, depending on how the numbers are interpreted.

GCF policy is to formally start the replenishment process once 60% of initial contributions have been allocated. Norwegian board member Hans Olav Ibrekk tweeted that there had been “informal” discussions on the subject Tuesday, “but governance needs to improve”.

The fund was launched with $10.2bn. Against that baseline, the trigger point is some way off. But Donald Trump axed $2bn of the US pledge and currency fluctuations hit the value of the remainder. While there has been some reluctance to write off the outstanding US contribution, in practice it brings the 60% threshold closer.

Under a proposal presented to the board, a replenishment facilitator could be appointed to lay the groundwork ahead of a pledging conference in the third quarter of 2019. That would potentially coincide with UN chief Antonio Guterres’ planned climate summit in New York.

Meanwhile, some kind of performance review will be needed to convince donors to chip in again.

The World Resources Institute (WRI) argues there should be a framework to set minimum national contributions. “We need a formula that is based on objective criteria and should apply to all countries,” said senior associate and former GCF board member Jacob Waslander.

Based on historic emissions and national wealth per capita, WRI suggests the US should be contributing 46% of the target sum – hardly likely as long as Trump is in the White House.

Amid these substantive questions, one procedural matter is key: whether the board can agree on how to disagree. Currently, it only takes one member to veto a decision. The co-chairs propose increasing that to five.

This is something that has been put on the agenda seven times and discussed three times in the past five years, but not resolved. Various voting systems have been mooted and rejected as unfair to one constituency or another. The latest offer on the table is to approve a decision unless one third of developed country or one third of developing country representatives object.

“This issue is fundamental to how the board works – there needs to be a way to move decisions if the board does not have consensus,” said WRI’s Niranjali Amerasinghe.

Finance is critical to trust between rich and poor countries as negotiators thrash out a rulebook for the Paris Agreement, due to be finalised at Cop24 in Katowice, Poland, this December.

The Climate Markets & Investment Association, a coalition of private sector observers to the GCF, emphasised its importance to mobilising wider green finance. “The outcomes of [the Bahrain board meeting] are crucial to progress and encouraging private sector markets to meet the climate challenge,” they wrote in a letter to the board co-chairs dated Monday.