As climate hosts, Poland will be charged with spurring greater efforts to cut emissions. The EU has some suggestions 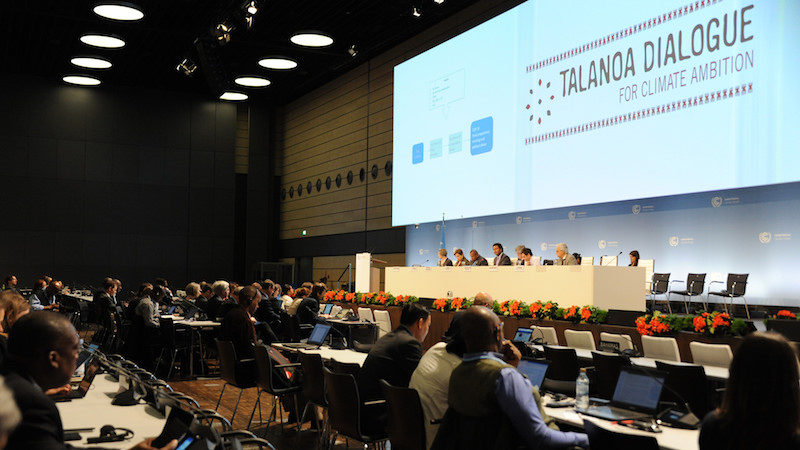 Fiji opens the Talanoa Dialogue in Bonn, Germany in May (Photo: UNFCCC)

By Karl Mathiesen and Natalie Sauer in Warsaw

One of the big question marks over Poland’s climate talks this December is to what extent the conference will also be European?

A letter sent from Austria’s EU council presidency to the Polish organisers on Friday, shared with Climate Home News, gives an indication of how the EU hopes to progress its agenda when diplomats arrive in the Silesian city of Katowice for the Cop24 meeting.

The bloc’s divisions with Poland on climate are well documented.

In a nutshell, Brussels wants to lead from the front, pushing all member states to make deeper carbon cuts. That was made clear on Wednesday by commission president Jean-Claude Juncker, who endorsed his climate commissioner’s recent call for increased targets. Poland has consistently resisted higher EU goals.

Sunday talanoa: climate negotiators ‘talk to each other like people’

The letter details how the EU believes Poland and the current climate presidency Fiji should run a key event at the talks, the Talanoa Dialogue.

The EU wants the event to trigger governments to consider “enhancing climate action”, according to a negotiator for the bloc. Among other things, this will mean all governments drafting new climate targets.

“With the commission proposal for the EU [2050 climate strategy] coming forward before the Cop, the EU will be in a good position to do so,” said the negotiator.

Climate Home News spoke to the head of the Polish presidency Michał Kurtyka in Warsaw. He said discussions over the European 2050 target would be “very intense”.

“We look forward to this discussion with the hope that Europe will be able to speak with one voice at Katowice,” he said.

The Talanoa Dialogue “is the first political moment after the Paris Agreement in 2015 to take stock of progress towards the long term temperature goal of the agreement,” said the EU negotiator. “We think it is important for the credibility of the process to give the Talanoa Dialogue sufficient space at the Cop, to recognise the science and to capture the political momentum in a robust and forward looking way.”

In the letter, the heads of the EU’s climate delegation, Helmut Hojesky and Elina Bardram, rejected a suggestion from the Polish and Fijian organisers that countries be allowed to participate without sending a minister.

The event should be “at least at ministerial level, if not higher”, they wrote. To attract ministers, it must be “visible to the media and the general public”. They also suggested inviting the UN secretary general Antonio Guterres.

They said the event should contain a briefing on the UN’s special scientific report on the impacts of 1.5C of global warming, which is due to be finalised in October. The latest leaked draft  said the difference between that and 2C, once seen as the “safe” warming threshold, was “substantial”.

At talks last week in Bangkok, the Fijians and Poles canvassed delegations for their thoughts on how the event should run. The EU followed up with the letter detailing their suggestions. The Polish presidency did not respond to questions regarding the EU’s letter. A Fijian spokesman said the input was a “normal part of the process”.