Jean-Claude Juncker urged the European Union to raise its goals for limiting climate change, but did not mention the forthcoming 2050 strategy 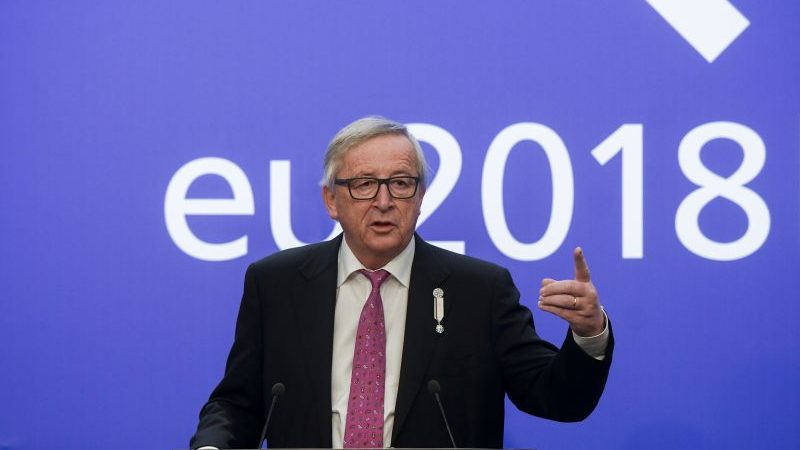 European Commission president Jean-Claude Juncker on Wednesday threw his weight behind a politically contentious push to raise the EU’s emissions reduction goal, without spelling out the details.

“I agree with our energy commissioner’s analysis of the CO2 emissions cut for 2030,” Juncker said in his final State of the EU address at the European Parliament in Strasbourg. “They’re scientifically right and politically necessary.”

However he did not mention the proposed numbers, or give any preview of the European Commission’s forthcoming draft climate strategy for 2050.

Miguel Arias Cañete, the climate action and energy commissioner, said in June that the European Union would begin the process of upping the bloc’s existing goal to reduce emissions by at least 40% compared to 1990 levels.

“We as Europeans want to leave a cleaner planet for future generations,” Juncker said. “The terrible events of this summer have brought home — not just to farmers — the importance of our efforts to safeguard the future of our coming generations.”

The EU’s 40% target was agreed in 2014, a year before the Paris Agreement, and was intended to align with a 2C global warming limit. As the world’s third-largest emitter, Europe is under international pressure to hike its targets for 2030 and 2050, to match the Paris deal’s stretch goal of holding the temperature rise to 1.5C.

Arias Cañete argued that the bloc’s newly agreed measures for boosting clean energy and efficiency between 2021 and 2030 allow for a higher emissions reduction target.

But there is still resistance from some member countries. Poland, which presides over this year’s Cop24 summit, has said that the EU should focus on meeting the existing measures first. German chancellor Angela Merkel also expressed displeasure on ARD public television in August.

“At the moment I am not very happy regarding these new proposals since many member states are already today failing to comply with what they promised — and people are not going to accept that,” she said, as reported by Politico.

Juncker hinted at the opposition: “Some may choose to ignore the climate challenge and look the other way,” he said. “We in the commission and you in parliament must look to the future.”

He also argued that the EU needs to take firm action to ban single-use plastics, rather than simply showing “good intention,” in order to win public trust ahead of the European elections next year.

Environmental advocates were hoping Juncker would give an update on the commission’s 2050 strategy proposal and express support for a goal that fits with a temperature limit of 1.5C.

“Juncker rightly recognised the damage that climate change is already inflicting on European citizens,” tweeted Jonathan Gaventa, director at the environmental think-tank E3G. “But while climate was a theme in the speech, it is notably absent from the deluge of @EU_Commission press releases with new announcements.”