Leaders put climate at centre of relationship, push for agreement on the Paris deal rulebook and reject Trump’s efforts to undermine global cooperation 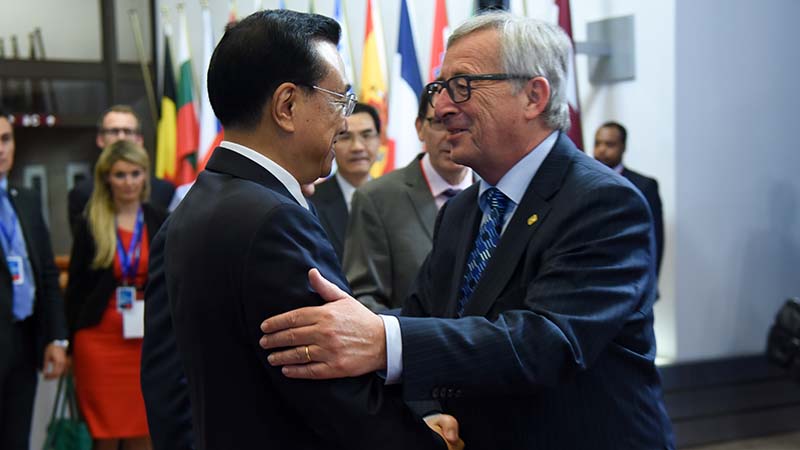 By Soila Apparicio and Karl Mathiesen

Climate change will become a “main pillar” of the relationship between the European Union and China, said leaders on Monday.

The joint statement, adopted at a summit in Beijing, committed the world’s largest and third largest carbon polluters to driving progress in UN climate talks.

They said they would push for agreement on the rulebook of the Paris climate deal, negotiations over which stalled this year, with continuing disagreements between Chinese and European diplomats.

The statement also called on “all parties” to uphold the Paris deal. That includes Donald Trump’s US, which remains a signatory until 2020.

In the face of US efforts to undermine international cooperation, leaders said the Paris Agreement was “proof that with shared political will and mutual trust, multilateralism can succeed in building fair and effective solutions to the most critical global problems of our time”.

The climate statement, as the only annex to a memorandum on a wide range of bilateral issues, places global warming at the centre of the complex, often fraught EU-China relationship.

The move, which encouraged climate campaigners around the world, could fill a vacuum left by Trump, said Léa Pilsner, a researcher for E3G based in Brussels.

The statement “enshrines climate change at the heart of the EU-China relationship and shows an intention to jointly drive the global climate governance process forward. At a time when climate leadership is very much needed”, said Pilsner.

German MEP Jo Leinen, who chairs the parliament’s China delegation said the commitment was “a vital message ahead of this year’s climate summit in Poland”. But he said the political deal needed to translate into instructions to climate negotiators to strike a deal.

The statement is almost identical to one drafted, leaked then withdrawn at the meeting between the two powers in June last year.

At that time, a disagreement over trade – reportedly the EU’s unwillingness to recognise China as a market economy – was behind the collapse.

Comment: Fragile China-EU climate pact must be backed by action

“Yes! Finally!” tweeted Isaac Valero, an advisor to the EU’s climate commissioner, calling it “historic” and a “major boost” to the Paris Agreement.

Li Shuo, a Greenpeace East Asia campaigner, told Climate Home News that the 2017 failure had bound trade and climate talks together at the highest level: “No progress on trade, no climate statement.”

One year on, global politics in the form of Trump’s US have brought the two uncomfortable bedfellows closer.

“In light of the trade war from Trump,” said Li. “The EU and China are inclined to project a joint front. Climate is a natural issue for collaboration.”

But Li said the statement shouldn’t just be window dressing and that the countries needed to follow it by updating their pledges to the Paris deal.

Pilsner agreed: “The challenge will be to turn this commitment into actions that get delivered regardless of possible disagreements on other fronts.”

The EU has signalled it may be ready to increase its emissions reduction pledge to the Paris deal. An influential government think tank in China has recommended the country consider a similar move.

Only a few changes were made from the 2017 statement, mostly to respond to subsequent events.

Note: This article was amended to remove a reference to the dropping of the Talanoa dialogue. That phrase appears in the statement.