The EU should raise its Paris deal pledge to a 45% emissions cut by 2030, commissioner Miguel Arias Cañete tells ministers in Brussels 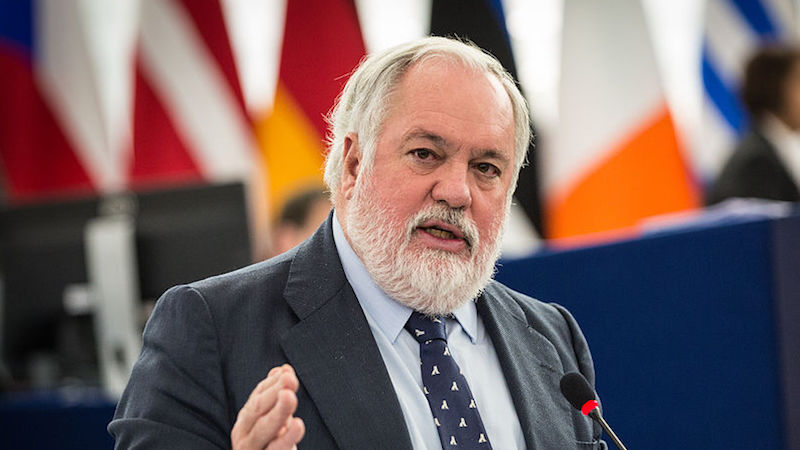 The European Union will begin a process to increase its pledge to the Paris Agreement, its climate chief said on Wednesday.

The EU’s current pledge to the Paris deal is for a cut of “at least 40%”. But after a series of new measures were approved this fortnight, the EU will now cut its emissions by more than 45% below 1990 levels by 2030.

The package of clean energy targets means the EU was able to raise its level of overall ambition, Miguel Arias Cañete, EU commissioner for climate action and energy, told a meeting of climate ministers in Brussels.

That also meant the EU would change its formal pledge to the Paris climate deal, known as a ‘nationally determined contribution’ or NDC, pending approval from the EU council of member states.

“Both new targets would de facto mean that the European Union would be in a position to raise the level of ambition of the NDC and increase its emissions reduction target from the current 40% to slightly over 45% by 2030,” said Cañete.

A European Commission spokesperson told Climate Home News the NDC would need to be formally changed by the European Council. The commission will ask the council to consider the change after the summer holidays.

The EU, China and Canada are holding ministerial talks, which opened on Wednesday afternoon.

The new targets alone should get us to nearly 45%. Factor in accelerated coal phaseout in many EU countries, and the number could be even higher. pic.twitter.com/Hdawg15vT3

Cañete noted the EU counted for less than 10% of global carbon emissions and called on all other nations to do more.

He said the change in ambition, spurred as it was by the development of stronger policies on renewable energy and energy efficiency, showed that raising “headline targets” was not always the first step in increasing political will.

“Ambition can emerge from the bottom up: if we strengthen our policies, renewables and energy efficiency in this case, we should be able to achieve deeper cuts in our overall emissions,” he said.

Under the Paris Agreement, all countries submitted voluntary pledges that detailed the efforts they would make to fight climate change.

That process delivered promises to cut carbon that collectively fell far short of the amount needed to keep global warming below 2C, which is the upper limit of the Paris deal.

There is a process for raising ambition, known as ‘ratcheting up’. But countries are not formally required to increase their NDCs until 2025.

The EU move to increase its pledge now may help to build goodwill for the Katowice climate talks this December in Poland. Negotiators are due to finalise the rulebook to govern the Paris deal and take stock of action so far.