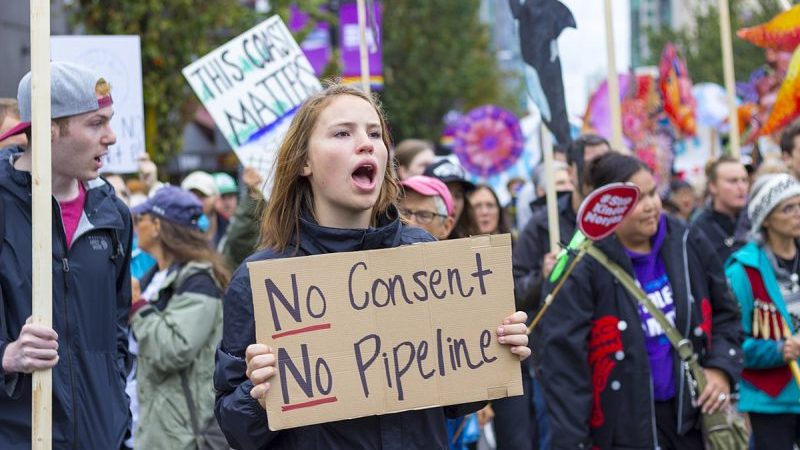 A protest against the Trans Mountain Pipeline in Vancouver, September 2017 (By William Chen - Own work, CC BY-SA 4.0, Link)

Canada’s climate leadership has been called into question after the government announced plans on Tuesday to nationalise a major oil pipeline.

The Liberal administration is set to buy the Trans Mountain Pipeline for C$4.5 billion ($3.5bn) from Kinder Morgan, to push through a controversial expansion.

That is a clear fossil fuel subsidy, critics said, which goes against a G7 pledge to phase out “inefficient” support for polluting sectors by 2025. It comes the week before Canada hosts a summit of G7 leaders.

“The decision by the Canadian government to acquire the Trans Mountain pipeline from Kinder Morgan has essentially been taken because, given the risk, no other private investor would step in,” said Mark Campanale, executive director of the Carbon Tracker Initiative. “It is government subsidising a market failure.”

As electric vehicles and battery technologies take off, dampening oil demand, he warned, it was likely “taxpayers will be left with a wasting and stranded asset”.

Shelagh Whitley, head of climate and energy at the Overseas Development Institute (ODI), expressed disappointment but not surprise at the buyout. “The petrostate was in hiding,” she told Climate Home News. “It is coming to the surface because the free market is not willing to bear this [environmental risk] any more.”

Canada has positioned itself in a global climate leadership role, last year hosting a trilateral “climate action” meeting with ministers from China and the EU and pushing to end coal power. But the pipeline “presents a critical credibility challenge for Canada”, said Greenpeace East Asia campaigner Li Shuo. “It is perverse to develop a major fossil project on one hand, while claiming to drive global climate ambition on the other.”

Prime minister Justin Trudeau came to power in 2015 declaring “Canada is back” on climate change, after Stephen Harper’s scepticism. But from the outset his green zeal was tempered by a political bargain with oil-producing provinces. In exchange for their support to introduce carbon pricing, Trudeau promised to back a new pipeline.

The federal takeover is a last-ditch attempt to deliver on that promise, in the face of strong opposition along the pipeline route from indigenous Canadian territories and British Columbia.

It is intended to be temporary. If and when Ottawa succeeds in getting the project started, it intends to re-privatise the pipeline.

In a statement, Canada’s environment ministry said it had modelled the impact of the Trans Mountain expansion on emissions and could meet national targets while growing the oil and gas sector. “The project fits within our government’s commitment to tackle climate change, create jobs and be a leader in the transition to a low carbon economy,” a spokesperson said. The ministry did not address CHN’s question about whether the buyout conflicted with its G7 pledge on subsidies.

Whitley said the government buyout “absolutely” counted as a subsidy as it was paying to deliver something the market would not.

Supporters argue the state intervention is not a subsidy, however, as this kind of infrastructure can generate revenue. Trevor Tombe, economics professor at the University of Calgary, wrote for CBC news: “Pipelines are regulated assets, like many utilities, with their tolls set by government. So the operator is essentially guaranteed to earn a modest profit.”

Analysis: Investors have made oil majors consider safe climate limits. What next?

That assumes the pipeline will now get built, an outcome campaigners are still fighting. “Just days before Canada hosts the G7 leaders’ summit, the Trudeau government has wasted billions of dollars in Canadian taxpayer money by taking on a doomed pipeline project and all of the liabilities that come along with it,” said Alex Doukas of Oil Change International.

The climate case against the pipeline is that it will increase sales of oil from tar sands, a carbon-intensive source of production, and lock in oil dependence for decades.

Bill McKibben, writer and leader of the keep-it-in-the-ground movement, delivered a withering verdict on Trudeau in the Guardian. History would remember him “not as a dreamy progressive, but as one more pathetic employee of the richest, most reckless industry in the planet’s history”.

The ODI is due to publish a ranking of G7 countries’ progress towards phasing out fossil fuel subsidies on Monday. Previous assessments have found patchy efforts, with stealthy support mechanisms such as tax breaks for oil drilling or capacity payments to old coal generators continuing to prop up legacy industries.

Next week’s G7 summit is set to be a tense affair, as the Donald Trump’s US disagrees with the other advanced economies on more or less everything. Politico reports US officials are using “environmental resilience” as a euphemism for climate change, in a bid to salvage some common ground.

At the last such event in 2017, the US opted out of a statement reaffirming commitment to the Paris climate agreement, but stuck with previously agreed language on ending fossil fuel subsidies.