All G7 nations, except the US, expressed support for the Paris climate accord, but the Trump administration did back an end to fossil fuel subsidies 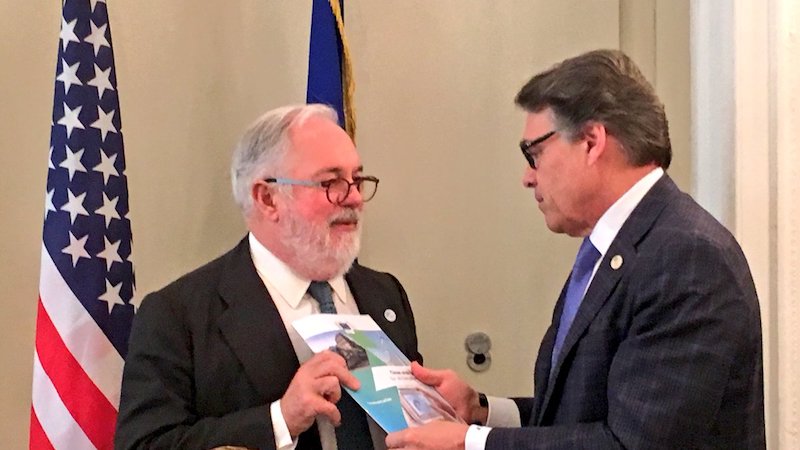 G7 energy ministers have failed to agree on a statement supporting the Paris climate accord after the US delegation said it was reviewing its position.

But the US did back an Obama-era pledge to end “inefficient fossil fuel subsidies” by 2025.

While all other ministers “reaffirmed their commitment towards the implementation of the Paris Agreement”, said Calenda in his closing summary, US secretary of energy Rick Perry had “informed fellow ministers and commissioner that the United States is in the process of reviewing many of its policies and reserves its position on this issue, which will be communicated at a future date”.

At the same meeting last year, all energy ministers, including former US secretary of energy Ernest Moniz made a strong statement in support of the Paris agreement.

US president Donald Trump has expressed a desire to withdraw from the Paris agreement and early exchanges on climate between Trump administration officials and other leaders are being watched carefully.

As the UN climate process moves beyond the striking of the accord and on to its implementation, the attitude of the US could influence the ambitions of other large emitters.

Perry released a post-meeting statement that made no mention of climate change but name-checked coal and natural gas as fuels that must be supported into the future.

“I discussed with my fellow Ministers that the Trump Administration believes that economic growth and the environment can successfully go hand-in-hand,” said Perry. “Renewables will continue to have an important role but traditional sources are still needed for energy and economic security into the foreseeable future.”

Immediately after the meeting, which ended on Monday, Cañete was defiant.

“While secretary Perry informed us that the US is currently reviewing its energy and climate policies, I was particularly pleased to see that all others joined the EU in reaffirming our solid commitment and determination to implement the Paris Agreement and continue the clean energy transition. We see climate action and the clean energy transition for what it is: a driver of jobs and economic growth, a moral imperative and a promise for a better future,” he said.

“Europe will continue to work with all its partners to reap all the benefits of the clean energy transition in line with the objectives of the historic Paris Agreement.”

#G7energy: while some review their climate and clean energy policies, most of us move forward and implement them in line w/ #ParisAgreement pic.twitter.com/oEHqflx0xf

The ministers were able to find concord on the benefits of “new market based clean energy technologies” and energy efficiency.

UK climate and industry minister Nick Hurd tweeted that he had been pleased to meet Perry and there was “lots of common ground on energy security and innovation”.

The ministers also agreed on phasing out fossil fuel subsidies by 2025. Calenda said all heads of delegation – including Perry – had “reiterated the commitment” made in 2016.

The definition of a subsidy is rubbery, leading to a huge discrepancy in the amounts reported by countries and institutions. The OECD estimates subsidies within its member states amount to $160-200bn each year.

The US and China last year published a peer-review of each other’s subsidies. The US reported $8.2bn worth of annual subsidies.

Trump has pledged to revive the US coal industry, which has been crippled by competition from cheap natural gas and renewable energy as well as regulations on air pollution. Some miners have called on the president to support the flagging industry through increased subsidies.

Apart from an executive order that began rolling back Barack Obama’s controls on energy sector emissions, the Clean Power Plan, Trump has reopened a moratorium on coal plants of federal land. Cheap federal leasing of public land to coal miners has been described as a subsidy programme worth as much as $28.9bn over the past 30 years.

The US department of state referred questions about fossil fuel subsidies to the treasury, which did not answer email requests to comment.

Perry’s affirmation on subsidies contrasts with his unwillingness to engage in discussions around the Paris agreement. But in his statement after the meeting he expressed support for “high efficiency, low-emission coal and natural gas with adequate financing from multi-lateral development banks” – seemingly advocating continuing subsidies in the short term.

Calenda closing statement made no mention of a G7 pledge, made in 2015, to phase out all fossil fuel use by the end of this century.

Perry, the former Texan governor who now leads the US energy department (DoE), has expressed doubt about the degree of certainty that exists in the scientific community about climate change. This echoes statements made by his boss and many of his cabinet colleagues.

During his confirmation hearing, Perry pledged to protect the jobs of scientists, including climate scientists, within his department. But a draft budget released last month foreshadowed $900m worth of cuts to DoE scientific spending.

The group of seven (known as the G7) are the seven largest advanced economies on earth and represent roughly a quarter of all global greenhouse gas emissions.