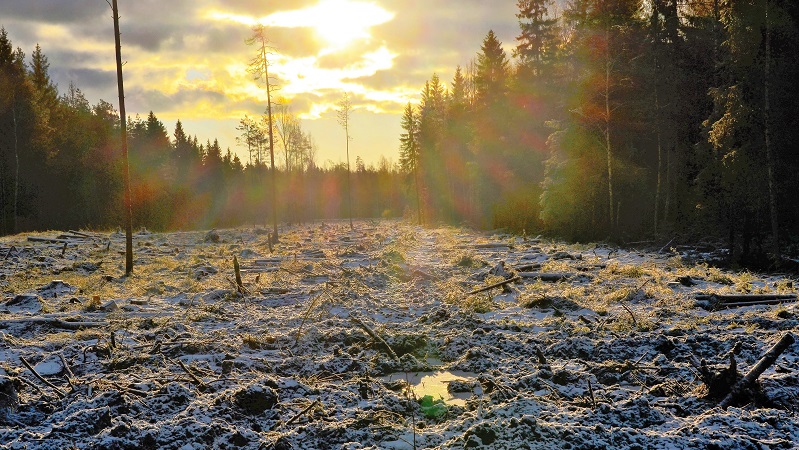 Our essential read this week comes from Estonia, where a sharp rise in logging is worrying conservationists.

Partly driven by the demand for biomass to meet renewable energy targets, large areas are being clear-cut, Arthur Neslen reports.

It hints at wider problems with EU carbon accounting rules, with member states negotiating caveats to protect commercial interests and obscure the impact of tree-felling.

“I see the forest changing. It is shrinking. They are clear-cutting too fast, in too many areas. If we don’t stop now, it might take 80 years to get the forest back” – small forest owner Leo Eensoo

Many carbon-cutting model scenarios imply large scale use of bioenergy, which may be traded across borders, so the way it is monitored matters.

We will have a second instalment on Estonia’s shrinking forests next week.

Stock up on red ink

El Niño has passed, but – in case you were in any doubt – global warming has not.

The data is in and the last three years were the three warmest on record, despite the cooling onset of a weak La Niña in 2017.

Mapping the changes in temperature for every year from 1850 to 2017. There are variations from year to year but the warming trend is starkly visible. pic.twitter.com/KfZkrmbZtL

That followed a major study that helpfully narrows the range of uncertainty around how sensitive global temperatures are to greenhouse gases. It rules out the worst-case scenarios, but also the best-case scenarios.

“Our numbers suggest that we’re going to shoot over 1.5C. We might be able to avoid 2C,” lead author Peter Cox told Carbon Brief.

Following a destructive wildfire season, they argue a “climate emergency mobilization department” is needed to meet the challenge.

They could look to Taiyuan for inspiration. The capital of coal-heavy Shanxi province in China electrified its entire taxi fleet – 8,000 cars – in a single year.

China Dialogue examined the lessons from its bold experiment – not least that while the electricity grid depends on coal, the climate gains are limited. But the city is positioning its EV factories for a greener future.

This is a more distant prospect, but Norway’s public airline Avinor claims all its short-haul flights can be electric by 2040. The operator aims to run its first commercial test flights in 2025, on a 19-seater plane.

If they pull it off, it will be a major breakthrough for the climate. Aviation is one of the toughest puzzles to crack.

Word of caution one: flying takes a lot of energy. Even with Norway’s bountiful clean power, questions are bound to arise over whether jetsetting is the best and fairest use of it.

Word of caution two: we’ve heard promises from the aviation sector before, yet change continues to be incremental.

The UK government was warned this week that there are “significant gaps” in its climate strategy for next decade.

This came from the Committee on Climate Change, an independent body set up by Britain’s climate change act precisely to keep the executive on task, across political cycles.

Take note, Germany: it’s not enough to have an ambitious target, you need the governance structure to make it happen.