The US came to sell fossil fuels as a solution to climate change, but were interrupted by protests as the divided US arrived in Bonn 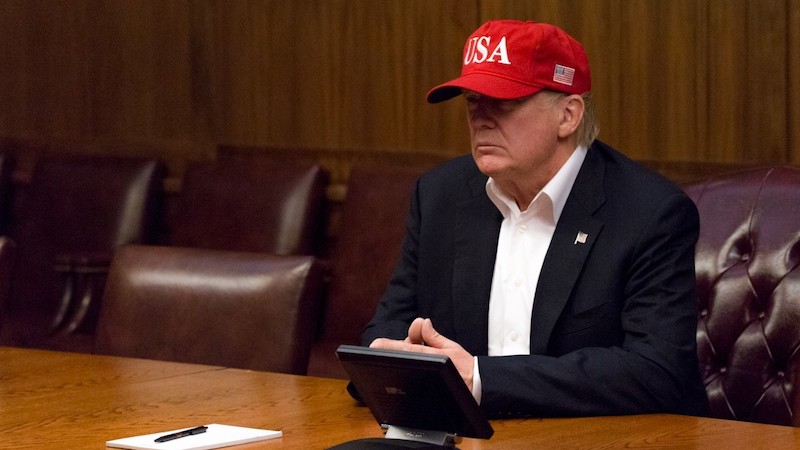 By Arthur Neslen and Karl Mathiesen in Bonn

A Trump administration attempt to offer fossil fuels as a solution to climate change was subject to protest and walkouts on Monday at UN climate talks in Bonn.

Representatives of the fossil fuel industry said they wanted to be part of the conversation and sat through intense questioning and heckling from media and protesters in the room.

The bitterness that has divided the US since the election of Donald Trump arrived in Bonn, when around a hundred mostly American climate protestors disrupted the event, with song, heckling and protest banners.

“So you claim to be an American, but we see right through your greed,” the protesters sang at a panel including George David Banks, president Trump’s special energy assistant and moderated by vice president Mike Pence’s assistant Francis Brooke. Natural gas, coal and nuclear companies were also represented.

As they marched out of the room, they were joined by hundreds of other demonstrators that had not been able to get in.

The panel sat quietly through the protest before launching into a defence of the role of various forms of fossil energy in climate mitigation, in front of a half-empty room.

Banks said: “This panel is only controversial if we choose to bury our heads in the sand and ignore the realities of a global energy system.” He repeatedly said he was in Bonn to talk openly.

When asked later by Climate Home News if the administration held the policy that the 2C warming target from the Paris deal needed to be avoided, he said: “I actually don’t know what that means, the 2C target”.

Banks has been involved with climate policy, of which the 2C target is a fundamental tenet, since the Bush administration.

Trump announced that the US would quit the Paris pact in a Rose Garden Speech last June, although no exit will be possible before November 2020.

When pushed on their position on Trump’s Paris withdrawal, two of the six panelists – the gas and nuclear representatives – said they disagreed, Krutka demurred, Barry Worthington, executive director of the US Energy Association said he agreed. The administration officials both refused to answer, although Banks is widely understood to have pushed for Trump to stay inside the Paris deal.

On the Paris deal, Banks said: “We’re part of the UNFCCC and climate mitigation is an important goal of the US but… I don’t think its any surprise that economic prosperity is a higher priority. When the president looks at the Paris Agreement and climate policy in general, he looks through the lens of what effect does this have on US manufacturing and competitiveness.”

Amos Hochstein, senior vice president of marketing at LNG company Tellurian said he had served in the Obama administration: “I’m very proud of that. I disagree with a lot of people on this panel but I’m here anyway and if we really care about clean air and climate change we have to stop siloing ourselves into communities where we only talk to ourselves.”

The reaction from within the conference in Bonn has been muted, with many trying to ignore the event.

“This is a sideshow, the world world is not paying any attention,” said Jay Inslee, governor of Washington, who made a statement to the press before the event began.

Report: For Africans, America’s pledge is about more than pollution

When asked whether coal could be part of the solution to climate change, Frank Bainimarama, the Fijian prime minister and COP23 president, told reporters: “I really don’t want to get into an argument with the United States of America, but we all know what coal does and we all know the effects of coal mining and of coal…

“There is really no need to talk about coal because we all know what coal does with regard to climate change,” he added.

Patrick Gomes, the head of the African, Caribbean and Pacific group of 79 nations said that the US meeting was “a diversion, unfortunately” from the urgent task of climate mitigation and adaptation.

“It has more of a commercial side to it than an ecological or environmental concern,” he told Climate Home News. “It is regrettable [that the US] still wants to bring to the fore commercial incentives and issues that take precedence over humanity.”

US negotiators have kept a low profile at the Bonn summit, raising their heads above the parapet only to support likeminded countries in trying to limit the practical scope and range of the Paris agreement.

“They haven’t caused any trouble,” one climate negotiator said. “The role that they played under the Obama administration is definitely missed and in that sense its troubling not to have them alongside us on many issues.”

Another former government official said that Trigg Talley, the leader of the US delegation would be feeling “terrible, of course” about what he was being asked to do.

“Representing the Trump administration on climate must be the worst thing in the world,” the ex-official said.

The EU, which was holding talks with China and Canada while the event went on, refused to comment on the meeting.