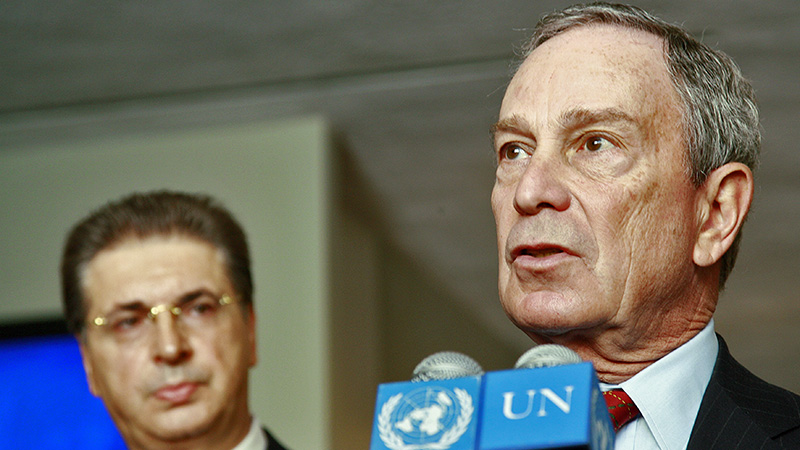 A coalition of cities, states and businesses representing more than half of the US economy should be given a seat at the climate negotiating table, billionaire philanthropist Michael Bloomberg said on the sidelines of UN talks in Bonn on Saturday.

Bloomberg, the UN climate body’s special envoy for cities, said non-state actors had already taken the US “half way” to meeting the national carbon-cutting pledge made under former president Barack Obama: a 26-28% cut in emissions from 2005 levels by 2025.

“This coalition represents more than half of the US economy,” he said. “If this group were a country, we would have the world’s third largest economy. In other words, a group of citizens, states and businesses who remain committed to the Paris agreement represent a bigger economy than any country in the world, outside the US and China.

“We should have a seat at the table and the ability to work with our peers in other nations. That is the aim of our pavilion.”

Report: African campaigners call for US to be kicked out of climate talks

A spokesman for Bloomberg Philanthropies confirmed that “the table” meant international negotiations and the reporting of climate action. Doing so would allow a US interlocutor to be held accountable for US progress in meeting its existing national contribution to the Paris climate deal, despite president Donald Trump’s intention to quit the pact.

Bloomberg’s Dan Firger told Climate Home: “There is a discussion between nation states ongoing about process of ratcheting up commitments under the Paris agreement. America’s Pledge is designed to drive this process, with the inclusion of all stakeholders in alignment with Fiji’s goals for grand coalition.”

The first report from America’s Pledge details the scope and range of actions taken by US cities, local authorities and business groups to cut greenhouse gases over the last decade. It also captures an “outpouring of public support” for continued efforts, in the absence of federal legislation and diplomacy.

The pledge offered a rallying point for Americans in Bonn who are deeply frustrated with President Trump’s repudiation of the Paris agreement and attempts to roll back flagship Obama-era climate legislation such as the clean power plan and fuel efficiency standards.

Following Bloomberg’s speech, Patricia Espinosa, the UN Climate Change executive secretary, welcomed the coalition launch  as a “special moment”, and said she would take it into the formal negotiations.

“While this remains a country-driven process, we do require the participation of all people to meet our climate challenge,” she said. “The climate change agenda and our sustainable development goals agenda cannot be delivered by governments alone.”

California governor Jerry Brown also threw his weight behind the initiative. His speech was repeatedly interrupted by clumps of demonstrators.

The protest was called over Californian heavy crude oil production, methane leaks at Aliso County and the state’s cap and trade system.

Over chants of “Still in for what?” and “No sacrifice zones”, Brown attempted to talk to protestors in a near-pastiche of the Dead Kennedys song ‘California Uber Alles’. “I am Governor Jerry Brown,” he shouted. “What’s your name?”

As a large section of the audience started counter-chants of “We want Brown!”, the Californian governor argued that oil and gas presented an “existential threat” but that shutting down their production would disrupt transportation and destroy jobs.

“Unfortunately in politics, we don’t have a magic wand,” he implored. “I can’t say ‘Stop, there’s no more coal, no more oil’. Otherwise all you will get is noise – and this is good noise! But it doesn’t get the job done.”

On grassy parkland behind a conference centre fence, Californian protestors said that they were angered by five refineries that were being allowed to expand under Brown’s cap and trade scheme.

One Brazilian indigenous leader, Chief Ninawa, who represents 13,000 people in Acre, claimed that California’s carbon market was giving credence to companies that were harming his community’s traditional forest use, and dividing indigenous leaders, with payoffs.

“We indigenous people are not polluters,” he said. “We preserve the land. The ones who pollute are these global and national corporations. And these are the multinationals that are paying to offset their emissions.”