Donald Trump withdraws the US from 2015 Paris climate agreement, leaving the US standing almost alone against action on climate change 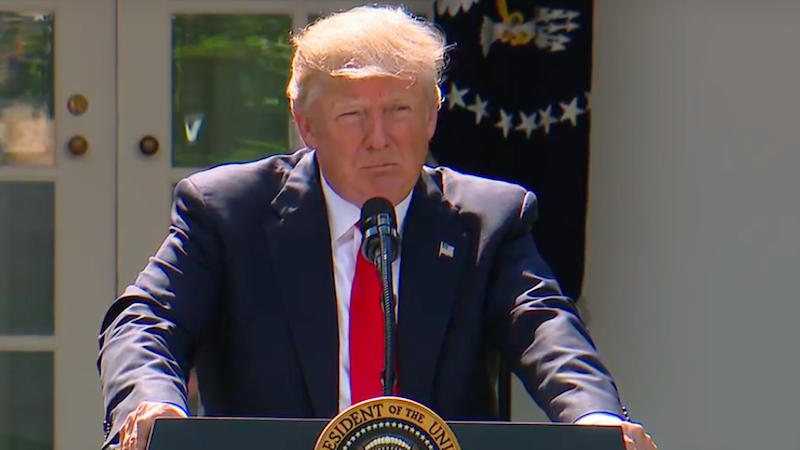 By Zack Colman in Washington, DC and Karl Mathiesen in London

President Donald Trump said on Thursday that the United States, the world’s second-largest greenhouse gas emitter, would exit the Paris climate change agreement, but then attempt to reenter the deal on its own terms.

Trump argued that the US was getting a raw deal from the accord. He, like most congressional Republicans and conservatives off Capitol Hill, contended the US would sacrifice too much while competitors like China and India face less stringent, immediate restrictions.

Officially, Trump said the US would “cease implementation” of the Paris agreement. Payments to the Green Climate Fund, which Trump called a “scheme to redistribute wealth outside the United States,” will not proceed — though the GOP-controlled Congress likely wouldn’t have approved that spending regardless. Trump said he’d try to renegotiate better terms for the US or a separate deal, but he’d be “fine” if the effort failed.

“The reality is withdrawing is in America’s economic interest and won’t matter much to the climate,” Trump said during a speech at the White House Rose Garden, adding that the Paris agreement “hamstrings the United States while empowering some of the world’s top polluting countries.”

Many analysts said the decision heralds waning American influence and soft power on the world stage. The vacuum leaves nations like China ascendant, though some fear the US departure will stymie ambition from other nations that must drastically cut emissions to avoid catastrophic warming.

Sierra Club executive director Michael Brune said: “Generations from now, Americans will look back at Donald Trump’s decision to leave the Paris agreement as one of the most ignorant and dangerous actions ever taken by any president.”

While the US had previously pledged to cut emissions 26-28% below 2005 levels by 2025, it was unlikely to get there under Trump whether or not it remained in the Paris process. That’s because the Trump administration has already begun unwinding the Clean Power Plan – regulations to curb power plant emissions – and achieving the aspirational 26-28% cut would have required additional action. Under Trump, such measures are farfetched.

A White House official told reporters Trump’s legal team recommended exiting Paris because it interpreted any adjustments would have to increase emissions cuts. Trump, however, was inclined to walk back the Obama pledge.

“The president’s legal team thought the best, more legal way to address it was to just get out,” the official said. The official declined to offer a specific emissions target for which the administration would aim.

Under UN rules the process of leaving the agreement will take the rest of Trump’s term in office, although US’ efforts to meet its commitments could cease immediately – in reality they ended when Trump was inaugurated.

The fact that the US stays within the overarching UN treaty is important as it would allow a future president to rejoin the Paris agreement without needing to gain senate approval – a feat that has been beyond previous presidents.

While Trump couched his reasons for leaving in economic terms, a number of major corporations made last-minute pleas to remain in the Paris deal. Elon Musk, chief executive of Tesla Motors, resigned from Trump’s advisory council following the Paris departure, but others industry titans – such as General Motors CEO Mary Barra – announced they’d remain on board in hopes of influencing future administration climate policy.

Statement on the US' withdrawal from the Paris climate agreements. #parisagreementhttps://t.co/T4XOjWZW0Q

International observers reacted with defiance. Leaders of major economies China, India, the EU, Germany and France have all stood strongly by the accord in recent weeks. Others have threatened retaliation through trade and other multilateral agreements.

Immediately after the announcement, the leaders of France, Germany and Italy, Emmanuel Macron, Angela Merkel and Paolo Gentiloni, released a joint statement that said: “We deem the momentum generated in Paris in December 2015 irreversible and we firmly believe that the Paris Agreement cannot be renegotiated, since it is a vital instrument for our planet, societies and economies.”

EU climate and energy commissioner Miguel Arias Cañete said it was a “sad day for the global community” but reiterated the resilience of the Paris accord.

“A key partner turns its back on the fight against climate change. The EU deeply regrets the unilateral decision by the Trump administration to withdraw the US from the Paris Agreement,” he said.

Christiana Figures, the Costa Rican diplomat who lead the UN climate process that resulted in the Paris agreement said: “It’s a very sad but concerning fact that apparently the White House has no understanding of how an international treaty works.”

She said there would be no way for Trump to leave the deal immediately, as he said in his speech.

“The blow to the international credibility of the United States, can really not be underestimated. When you have a head of state that stands up in front of the cameras of the world and makes statements that are factually so incorrect,” she said.

A separate White House official didn’t say whether any nations had expressed interest in a renegotiation. The official suggested some “are going to want to sit down with us and talk about the potential way forward” while admitting, “I don’t know what that looks like.”

Trump’s action delivers on a campaign pledge to “cancel” the Paris agreement, aligning with a nationalist tenor that sought to buoy rural regions in the US hard hit by globalisation. Many of those areas are also dependent on fossil fuel extraction.

Parts of Appalachia, the midwest and west, which largely backed Trump in last fall’s election, have struggled economically, especially in recent years. Cheaply available natural gas and falling renewable prices have edged out coal in the electricity sector this decade, and global oil prices collapsed amid a supply glut. Environmental policies, particularly those championed by President Obama, played a role in the downturn but were largely pegged as the main culprit for regional troubles.

As such, the nixing the Paris agreement became a rallying cry for rural America, congressional Republicans and nationalists within and without the Trump White House. They said the pact handcuffed US independence and restrained economic growth, suggesting that escaping the deal would give distressed areas a freer hand.

“Our withdrawal from the agreement represents our reassertion of American sovereignty,” Trump said.

Most Republicans cheered the news.

“The Paris climate agreement was simply a raw deal for America,” House Speaker Paul Ryan, R-Wis., said in a statement.

Scott Pruitt, the EPA administrator who pushed hard behind the scenes for the president to leave the accord, closed Trump’s remarks in the Rose Garden.

“Mr. President – it takes courage and commitment to say no to the plaudits of men while doing what’s right by the American people. You have that courage,” said the former Oklahoma attorney general.

Still, handful of Republicans and Democrats representing fossil fuel-dependent economies broke with the president over his decision. Like some of the corporate players such as coal firm Cloud Peak Energy and ExxonMobil had argued, those lawmakers said exiting Paris relinquishes a chance to steer global climate and energy trends in ways that would benefit industries and regions undergoing a tough transition as the world reduces its carbon dependency.

“The United States can’t remain an energy leader if we aren’t even at the negotiating table,” Sen. Heidi Heitkamp, D-North Dakota, said in a statement. “No agreement is perfect, and adjusting our commitments or timetable would have been viable avenues to pursue. But abandoning this agreement altogether is a reckless decision that forfeits an opportunity to guarantee a viable future for North Dakota coal, oil, and natural gas on the global level.”

Similarly, some corporate players such as coal firm Cloud Peak Energy and ExxonMobil had argued exiting Paris relinquishes a chance to steer global climate and energy trends in ways that would benefit industries and regions undergoing a tough transition as the world reduces its carbon dependency.

That’s a distinction many who supported the Paris process are ignoring when characterising industry’s interest in remaining, a White House official said. That official said support for the original Paris goals as-is was never strong.

“A lot of these CEOs wanted us to potentially stay in the agreement but conditioned on changing the pledge or something like that. It’s a little more nuanced,” the official said.

A small cadre of environmental advocates had argued reasons such as Heitkamp’s meant the Paris deal was better off without a Trump-led US. International negotiators at the G7 and G20, among other fora, have grown increasingly frustrated with US efforts to water down provisions and language related to climate change.