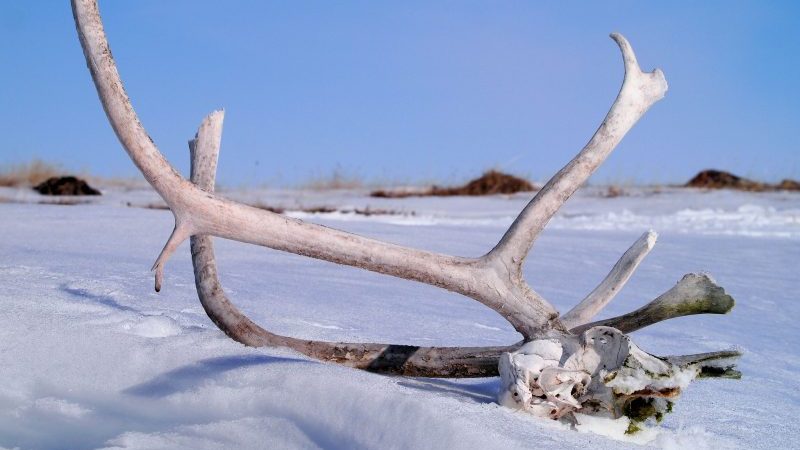 The Canadian Arctic is warming three times as fast as the rest of the country, impacting caribou and indigenous communities (Pic: Flickr/Fiona Paton)

Catherine McKenna told a Chatham House conference she did not normally spend much time talking about climate science, preferring to focus on policy.

“Unfortunately, some people in positions of power continue to propagate myths, including yesterday just here in London,” she said.

That was a reference to Abbott’s lecture to the Global Warming Policy Foundation climate sceptic thinktank, in which he said global warming was “probably doing good”.

Wrong & irresponsible. Climate change is real & man-made. Not only do we owe it to our kids to act, clean growth is trillion $ opportunity. https://t.co/BnZ1o7oktw

McKenna described meeting indigenous youth in Canada’s high Arctic region, which is warming three times as fast as the rest of the country.

One 14-year-old boy came to her with a list of environmental changes he thought might be caused by climate change. These included a decline in caribou numbers and experienced hunters falling through thinning sea ice and being lost forever. His observations were backed up by a climate scientist in the group.

“I can say with complete and utter certainty my young Inuit friend does not think that climate change is ‘probably good’,” said McKenna. “Unlike some people, they do not have the luxury of burying their heads in the sand… It is up to people in this room to stand up for them.”

Abbott’s speech was heavily criticised back in Australia, with the Labor opposition’s deputy leader Tanya Plibersek describing it as “weird stuff”. He had “left the realm of the merely destructive and entered the realm of the loopy,” Plibersek told the Guardian.

Former British climate minister Ed Miliband was also scathing, tweeting coverage with the comment: “I know Donald Trump has lowered the bar for idiocy but…”

I know Donald Trump has lowered the bar for idiocy but….. https://t.co/LAYOKJfxFF

While Abbott is no longer leading the government, as a lawmaker in the ruling Liberal party he is still in a position to influence policy. His personal crusade against greenhouse gas emissions curbs is destabilising a proposed bipartisan clean energy target.

Recent analysis by the Australia Institute found that Australia was the only wealthy nation not to have reached peak emissions in its energy sector. Emissions are at a record high, with petrol and diesel use increasing while coal maintains a stronghold in the power generation mix.

Despite Abbott’s sceptical stance and president Donald Trump’s backsliding on US commitments, McKenna was bullish on the scope for international cooperation on climate change.

She praised the work of former New York mayor Michael Bloomberg and California governor Jerry Brown in coordinating US action at state and city level.

“The US admin, far from weakening the bonds of Paris [climate agreement], has only strengthened the world’s resolve and it has strengthened Canada’s resolve,” she said.

Last month, Canada hosted climate ministers from key countries in Montreal, in a replacement for the US-led Major Economies Forum. It also doubled its annual contribution to the UN climate science panel, after Trump axed the US contribution – previously the panel’s biggest source of funding.

McKenna also talked up Canada’s pledge to phase out coal by 2030 – “coal isn’t coming back” – and the jobs being created in clean technology sectors.

The political price of the federal government’s climate policies has been support for oil pipelines to serve tar sands extraction, mainly in Alberta. Indigenous communities and activists have mounted vigorous protests against such infrastructure, citing both local and global environmental impacts.

At the same time, a slump in oil prices since 2014 has squeezed the profitability of this carbon-intensive source of oil. Recently, TransCanada announced the cancellation of its Energy East pipeline, on economic grounds.

Asked if tar sands’ heyday was over, McKenna defended the government’s backing for pipelines. “We still are going to get our resources to market in the near term; we are still going to use oil and gas,” she said. “I am elected to represent the people of Canada… that includes tar sands workers.”