California governor’s list of city, state and national governments nears 200 and is shifting climate diplomacy beyond the caprices of national leaders 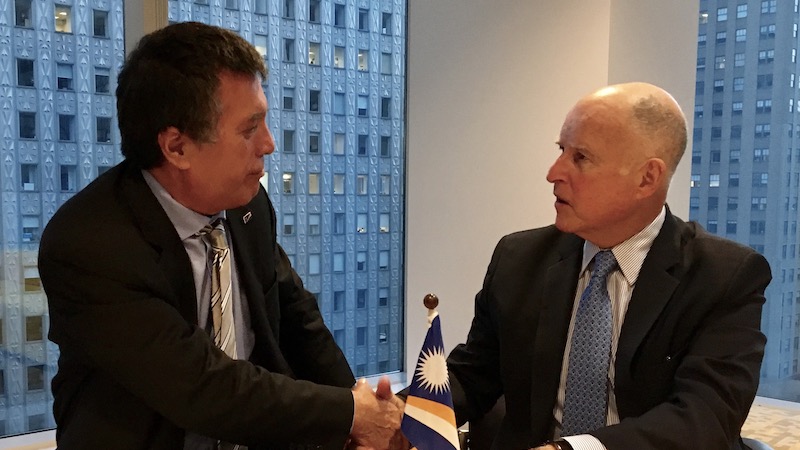 The Marshall Islands and Mozambique have joined a growing group of governments convened by California governor Jerry Brown that have committed to deep carbon pollution cuts.

The Under2 coalition has now been signed or endorsed by 187 governments. Signatories agree to reduce their CO2 emissions drastically by the middle of the century.

On Sunday, on the eve of the UN’s Climate Week in New York, Brown announced ten new members, including the low-lying Pacific islands.

“Climate change threatens the very existence of the Marshall Islands and many other places,” said Brown. “Cities, states and countries are joining the Under2 Coalition to curb emissions and prevent a horrible catastrophe.”

The Marshall Islands and Mozambique are the seventeenth and eighteenth nation states to join. Also signing were the US state of Maryland, the Australian state of Queensland, two German states and several US cities. 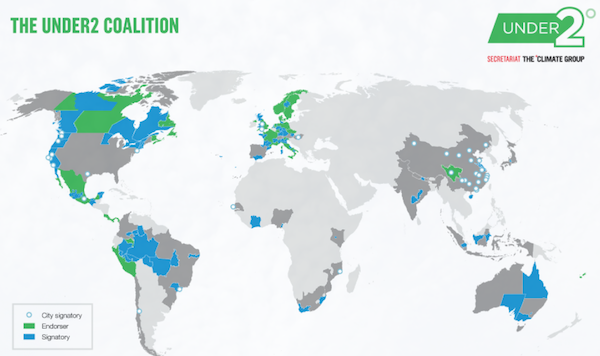 In a press release on Sunday, Brown’s office said the additions brought the number of people represented by governments in the coalition to 1.2 billion, 16% of the global population. The jurisdictions have a combined GDP of $28.8 trillion, 39% of the world economy.

Signatories to the coalition are required to submit a plan for reducing their carbon emissions to 80-95% below 1990 levels by 2050 or to cut their pollution to just two tonnes per person per year. The average Californian emitted 11.3 tonnes of CO2 in 2015.

Albeit a tiny overall contributor to climate change, the collaboration between the Marshall Islands and the governor of California is significant. The Marshall Islands are a convenor of the ‘high ambition coalition’, which drew together a bloc of hawkish governments in advance of the signing of the Paris climate accord in 2015.

Brown has grouped together a similar crowd of nations (many of the national governments who have joined Under2 were involved in the high ambition coalition). By including local and state governments the group can work around national leaders who try to stall climate action.

“Every country, every company, and every constituency must take ambitious climate action, and it is this groundswell of climate action that the Under2 Coalition is building,” said Silk.

Since taking power in January, US president Donald Trump has warned he intends to withdraw the US from the Paris deal. Brown, whose tenure expires in late 2018, has set himself up as the envoy for a segment of the US that remains determined to lead climate action.

“America is not run by Donald Trump,” Brown told a meeting on climate change at the UN General Assembly in New York on Monday. “We are a country of diverse power centres and mobilising those power centres that are not controlled by the president is still a very worthwhile goal, and very powerful.”

Brown will be special advisor for states and regions to the Fijian presidency of the next major climate talks in Bonn in November. The governor has discussed climate cooperation in meetings with world leaders, including China’s Xi Jinping. This time next year, he also will host a summit in San Francisco that will bring leaders of cities, states, business and civil society together just months before a critical meeting of the UN climate treaty at the end of 2018.

“The withdrawal from the Paris climate agreement puts us, as a nation, out of step with where the rest of the world is headed. That doesn’t mean that the cities can’t pick up the slack,” said Orlando mayor Buddy Dyer, who also joined Brown’s initiative this week.

Brown has also championed tough targets for emissions reductions in his state – the world’s sixth largest economy. In 2016, he signed a bill mandating an emissions cut of 40% below 1990 levels by 2030.

But last week, the domestic push stalled after the legislature failed to vote on a bill that would have set California on course to 100% clean energy by 2045.