How did a country that launched one of the world’s first major carbon pricing schemes become a rogue polluter in just five years? 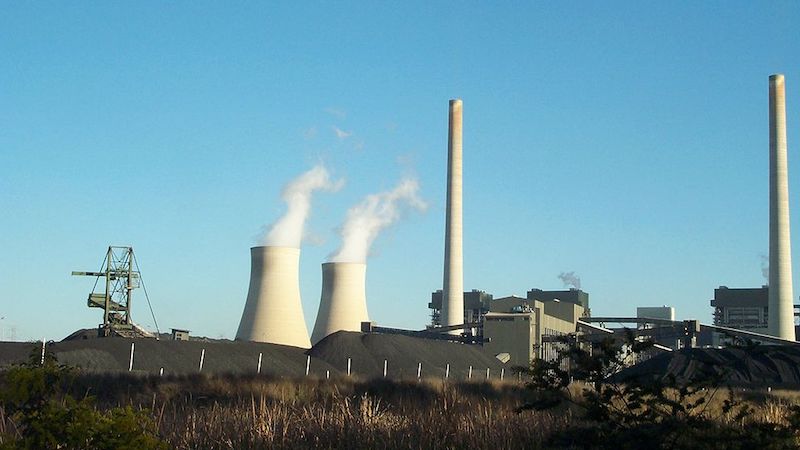 By Adam Morton in Hobart

Australia prides itself on punching above its weight on the global stage, but a recent achievement received less-than-usual attention in the halls of parliament and the country’s parochial rightwing press.

According to a think-tank analysis, it is the sole wealthy nation where greenhouse gas emissions from energy combustion are at a record high.

Among what are known as Annex 1 countries, only Turkey – which straddles a grey zone between developed and developing status – joins Australia in having energy combustion emissions higher in 2017 than at any point since 1990, the baseline year under the United Nations Framework Convention on Climate Change.

The analysis by progressive think-tank the Australia Institute found the country’s energy emissions kicked up sharply this southern winter due to increased sales of petroleum products – particularly diesel, but also petrol.

Energy analyst Hugh Saddler, an honorary associate professor at the Australian National University, found it pushed the total above the previous record set in 2009, a recent decline in emissions from electricity generation notwithstanding.

Saddler told Climate Home it was extraordinary that an industrialised country’s energy emissions continued to climb.

“The rise now is due to increased use of petroleum, but a distinctive feature about Australia compared with other Annex 1 countries is that it continues to have a heavy reliance on coal,” he said. “We’re not doing enough quickly enough to reduce that heavy reliance.”

Enele Sopoaga, prime minister of climate-vulnerable neighbour Tuvalu, told Fairfax Media last week: “While the rest of the world is moving ahead to renewable energy, Australia is stuck in the dark ages with its reliance on dirty fossil fuels. This is bad news for the Pacific”

Despite this, the country is on track to meet its 2020 Kyoto Protocol target – a 5% reduction below 2000 levels. This is largely due to a reduction in land clearing that had already happened when the target was announced, and generous carbon accounting rules that let it count carry over credits from beating its lenient target in the protocol’s first period.

Some European countries, including Germany and Britain, volunteered to cancel their carryover credits so meeting their targets reflected actual emission cuts. Australia declined.

Transport emissions have received relatively little political attention in Australia. In response to questions from Fairfax Media, the government said it had a ministerial forum on vehicle emissions to consider reforms on fuel efficiency and quality. 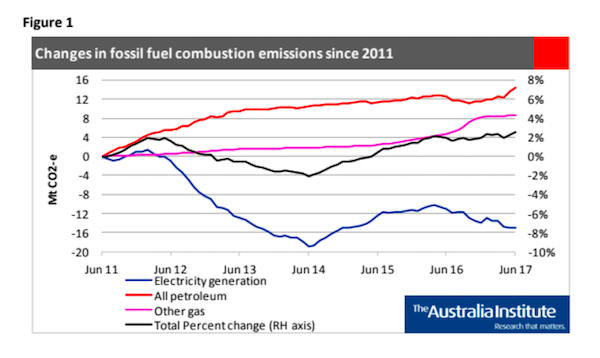 Coal, on the other hand, is at the centre of heated political debate. The Liberal-National coalition government, which has a centre-right leader in prime minister Malcolm Turnbull but relies on the support of hardline conservative backbench MPs given voice by former leader Tony Abbott, is divided over whether it should be subsidising new coal generation or adopting policies that would support renewable and low-emissions technology.

Black coal and lignite still provide about three-quarters of national electricity, but a dozen old and failing coal generators have closed in the past five years. Amid concerns about potential supply shortages, business groups have led calls for a long-term national climate and energy policy to drive investment in new power plants.

Australia’s only existing policy to encourage private investment is a renewable energy target. Under Abbott in 2014 and 2015, the government reduced that target and abolished a 2012 carbon price scheme – described colloquially by opponents as a “carbon tax”, but actually a national emissions trading scheme that was one of the first of its kind. As yet, there is nothing to replace the renewable target when it lapses in 2020.

Earlier this year, a government-commissioned review by the nation’s chief scientist, Alan Finkel, recommended a new policy – a clean energy target – that would effectively replace the renewable target, but broaden it to encourage other low-emissions technologies. The level of support available would be weighted by emissions intensity, with clean fuels receiving more.

Months on, it is unclear whether the government will adopt it. Turnbull and environment and energy minister Josh Frydenberg have voiced support for Finkel, but face the challenge of crafting a policy that government MPs will vote for. Those who reject climate science – including Abbott, a vocal critic of Turnbull since being deposed by his party two years ago – have vowed to cross the floor to vote against any policy that subsidises clean energy ahead of coal.

While senior government members say they would welcome private investment in new coal power, they have softened expectations they will explicitly support it. In February, treasurer Scott Morrison brandished a lump of coal in Parliament, saying it had delivered prosperity for more than a century. By August, he was delivering a series of speeches warning the era of cheap coal-fired power was coming to an end. He warned new plants would be expensive and take years to build.

Instead, the government attempted to pressure energy company AGL to extend the life of the giant Liddell coal plant – 46-years-old and running below capacity due to operational problems – beyond its scheduled closure in 2022. The company resisted, instead promising to come up with a plan in 90 days to replace the 2-gigawatt capacity using other technologies.

AGL’s position on coal is consistent with the overwhelming majority of Australia energy companies and financiers. They consider coal power unbankable and, given Australia’s commitment to the Paris climate agreement, say the future is cleaner generation.

Australia’s pledge at Paris was a 26-28% emissions reduction below 2005 levels by 2030. Several analyses have found they currently have no path to meet the existing goal, let alone the eventual increased target Turnbull and Frydenberg have acknowledged is implied under the global deal.

The Australia Institute analysis is not based on official emissions data, but drawn from monthly government agency statistics for national petroleum use and electricity and gas consumption in eastern states. Saddler’s assessment that Australia and Turkey are the only Annex I countries (those considered industrialised or “economies in transition” in the 1990s) to have hit a record high for energy emissions is based on extrapolation from the most recent data submitted to the UNFCCC in 2015, when those from other countries were either in decline or well below an earlier peak.

Turkey has seen a dramatic surge in energy combustion emissions in recent years, easily outstripping other Annex I countries. Heavy investment in coal power has seen its emissions from the energy industry rise 260% since 1990, from 38m tonnes in 1990 to 137m tonnes in 2015.

The country pledged at Paris only to reduce emissions 21% below business as usual by 2030, rather than an outright cut. In July, president Recep Tayyip Erdogan said he would not be ratifying the agreement, citing Donald Trump’s announcement the US would abandon the deal.

Saddler said Turkey’s per capita emissions were less than a quarter of Australia’s, and its GDP per head less.