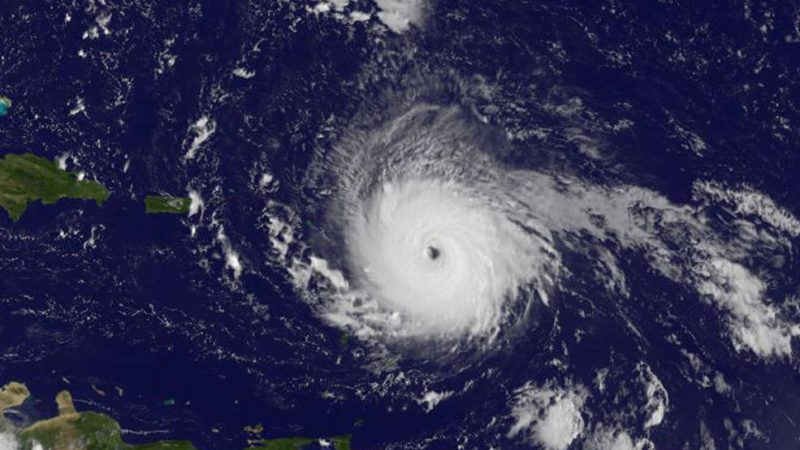 Irma as it strengthened to a category 5 hurricane on Tuesday (Pic: NASA/NOAA GOES Project)

At a meeting of the UN climate science panel in Montreal, Caribbean scientists – some of whom couldn’t make it to Canada because of Hurricane Irma – are urging a focus on extreme weather damage.

Irma has astonished meteorologists with its intensity, maintaining top wind speeds of 185m/h (300km/h) for a world record 37 hours. Outer islanders surveyed the devastation on Friday as Cuba, the Bahamas and Florida prepared to be hit next.

Three thousand kilometres north, the Intergovernmental Panel on Climate Change (IPCC) is laying down the outline of its next comprehensive report on the state of climate science, due out in 2021-22.

In a discussion scheduled for Friday, small island states will push to include research on the damages caused by climate change. This topic, known in UN jargon as “loss and damage”, is politically charged as wealthy nations fear it could open them to claims of compensation.

Arthur Rolle, the national representative for the Bahamas, told Climate Home by email from Montreal he had considered staying at home. “My fears for my home is that it will be tested for the first time with a hurricane of strength in excess of 140 miles per hour [225kmph],” he said. Most of his friends and family lived in flood-prone, low-lying areas, he added.

Weather forecasting in the region had “vastly improved” since previous hurricanes, he said, but global warming was worsening the impacts of such storms.

“The IPCC can help small island states understand, manage and prepare for hurricanes by continuing to stress how the increase in global sea surface temperature will increase the intensity of hurricanes and examine further if there is a correlation of increased temperature with frequency.”

#Irma is expected to move through the SE Bahamas today and approach south Florida on Saturday as a dangerous category 4 hurricane pic.twitter.com/83bh2woM43

A spokesperson for the IPCC told Climate Home delegates from five Caribbean states were in attendance. Two that pre-registered had not arrived.

Cheryl Jeffers from St Kitts and Nevis decided not to travel, according to contacts from think tank Climate Analytics, which supports island states at UN climate forums. Jeffers could not be reached for comment. The country escaped the worst of Irma, but suffered power cuts and “significant damage” to property and infrastructure, according to the prime minister.

Celso Pazos Alberdi of Cuba’s meteorological institute is understood to have returned home after talks started. Irma is expected to skirt the northern coast of Cuba later on Friday and Saturday, bringing storm surges of up to three metres.

St Lucia’s representative to the UN climate process Valerie Leon was forced to cancel her attendance at a separate climate change meeting in Rabat, Morocco, which started on Thursday.

“Even I as a climate scientist am startled to see another potentially devastating storm in this region so shortly after Harvey,” said Anders Levermann from the Potsdam Institute for Climate Impact Research and Columbia University in a statement.

“Unfortunately, the physics are very clear: hurricanes get their destructive energy from ocean heat, and currently water surface temperatures in this region are very high.

“Greenhouse gas emissions from burning coal, oil, and gas raise our planet’s temperatures and provide the energy for ever stronger tropical storms. So climate change is not causing theses storms, but it can worsen their impacts.”

In the Bahamas, around 2,000 residents of southern islands have been ordered to evacuate to the capital Nassau, in anticipation of a direct hit on Friday. Storm surges of up to 6 metres are forecast in some areas.

“There is really just nothing you can do to withstand a category five storm if you are right in its path,” said Adelle Thomas, a senior researcher with Climate Analytics based in Nassau.

As she explained in a recent article for Climate Home, Thomas’s research shows small island states are hit increasingly hard by tropical storms but don’t have robust data to measure the influence of climate change on specific events.

The cost goes beyond the immediate destruction of lives, crops and infrastructure, she told Climate Home by Skype, before the storm reached the Bahamas. The risk also discourages investment in island industries, weakening their economies over the long term.

“What we need from the scientific community is research on loss and damage that is already happening, and loss and damage that can happen. These need to be able to be attributed to climate change,” said Thomas. “It is important for the IPCC to focus on that robust scientific evidence. That will provide a solid basis for pushing this agenda at climate talks.”

Visualization of the impacts of hurricane categories 1 to 5, via @ClimateCentral #Irma #climatechange pic.twitter.com/cp1WAGiGX1

At UN climate talks, “loss and damage” is a contentious topic. Initially, vulnerable countries demanded compensation from those responsible for the bulk of greenhouse gas emissions. That approach stalled as developed countries refused to accept liability, forcing negotiators to look for other ways forward.

The word “compensation” is considered politically toxic, as wealthy countries fear setting a precedent for claims against them. But Thomas said that small islands in particular needed some form of support.

Given the global attention the storms have created, the issue may get extra attention at the next round of climate negotiations in November, especially as Pacific island state Fiji holds the presidency.

In January, Fijian prime minister Frank Bainimarama promised to use his platform to highlight the interests of low-lying and vulnerable nations. However campaigners noted he did not explicitly name loss and damage as a priority and said progress was urgently needed.