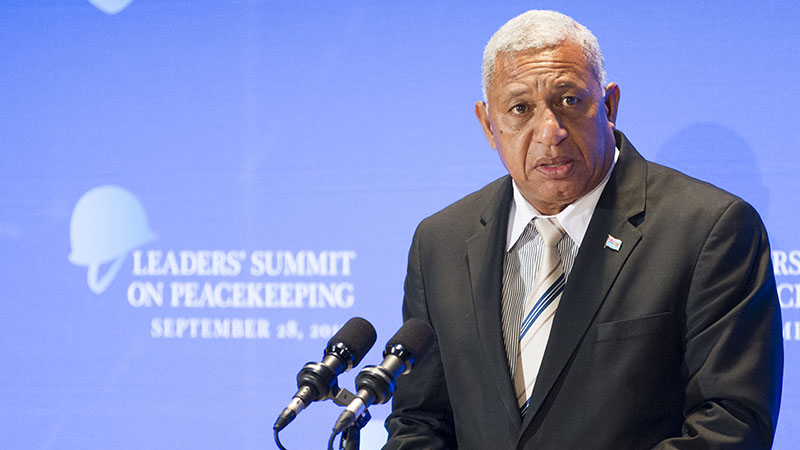 Fiji will use this year’s UN climate summit to highlight the risks faced by low-lying countries in a warming world, its prime minister has said.

The tiny Pacific Island state will host the 2017 meeting at the UN climate body’s headquarters in Bonn, Germany, where talks will continue on developing a set of rules for the 2015 Paris Agreement.

“Our Presidency will keep the interests of all nations – including those that are low-lying and vulnerable – at the forefront of our negotiations,” Frank Bainimarama said.

“We are also focused on turning the words and commitments of the Paris Agreement into measurable actions on the part of all nations, and are calling for transparent systems of accountability and practical outcomes to ensure the agreement is a success.”

There was no mention of the US in Bainimarama’s short statement, which was released after meetings with UN climate chief Patricia Espinosa.

Intense speculation surrounds continued US participation in the Paris climate deal, which president Donald Trump threatened to “cancel” during his campaign.

Myron Ebell, a former advisor to President Trump told media on Monday he would stick to that pledge, and that the country could pull out imminently.

“The US will change course on climate policy… Trump wants to unleash American energy production,” said Ebell, who was part of the president’s transition team after he won office.

Last November Bainimarama issued a personal invitation to Trump to visit Fiji and see for himself the impacts of rising sea levels and extreme weather linked to climate change.

“I again appeal to the president-elect of the United States, Donald Trump, to show leadership on this issue by abandoning his current position that man-made climate change is a hoax,” said Bainimarama.

“I say to the American people: you came to save us then and it is time for you to help save us now,” he said, referring to Washington’s support for Fiji during the second world war.