In the Caribbean and Pacific, islanders are already hit by climate change, but lack tools to measure the damages for leverage in international negotiations 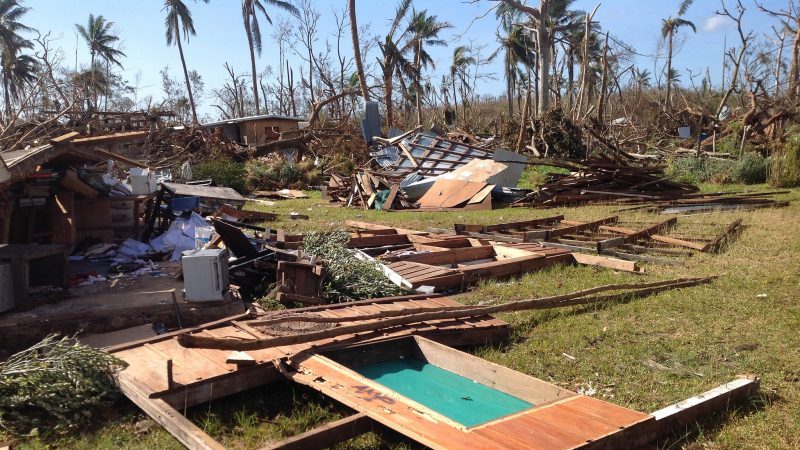 Loss and damage – an emerging issue in climate negotiations – is not just a future threat to highly vulnerable small island developing states (SIDS): it is happening now.

“Loss and damage” is a term describing the residual impacts of climate change that cannot be prevented by either mitigation or adaptation. This includes permanent and irreversible losses, such as loss of life or eradication of habitats, or damages that can be repaired, including deterioration of infrastructure.

Impacts from climate change are already occurring. SIDS need to be able to determine the scale of these impacts to effectively manage consequences and to make the case for support in international policy, climate finance and scientific arenas.

In our new study, published in Regional Environmental Change, my co-author Lisa Benjamin and I explore existing methods that SIDS are using to assess and manage loss and damage. We interviewed negotiators from the Alliance of Small Island States (AOSIS) and analysed the intended nationally determined contributions (INDCs) of AOSIS member countries.

We aimed to gain an understanding of loss and damage that is already being experienced by SIDS, how these countries are managing these impacts and identify challenges that will need to be addressed as global temperatures increase.

What we found is that SIDS are already identifying loss and damage in their countries.

Six of the seven interviewees identified tropical storms as being the source of the majority of existing loss and damage, in most cases naming specific storms and levels of financial damages experienced.

The majority of INDCs similarly identified damages due to extreme events and often included associated costs. While these storms were acknowledged as resulting in loss and damage, attribution of these impacts specifically to climatic changes is a complex process. However, warmer sea surface temperatures and sea level rise due to climate change have been linked to more intense tropical storms and subsequent damages.

“Hurricane Joaquin resulted in major losses across islands with roads washed out, communities looking to be reestablished. From that storm also, crops were washed out making it difficult for economies to recover because crops that they are dependent on for income were no longer” – Caribbean respondent

All interviewees identified slow-onset events, including sea level rise and ocean acidification, as having already resulted in loss and damage.

However, respondents were unable to provide financial costs of loss and damage associated with these events, particularly when impacts are ongoing.

“We don’t have sufficient information on costs but we are still able to see the impacts. Specifically, historical buildings that were once on hard ground are now underwater” – Caribbean respondent

“Anytime there is a storm or major high tide, along [a main road] the sand needs to be constantly replaced and boulders need to be replaced that were put in to prevent washing out of the road. The high tide mark is at such a level that water is in the road. Even in the presence of a sea wall there is breaching from time to time. These are ongoing costs” – Caribbean respondent

The lack of financial costing associated with loss and damage from slow-onset events was attributed to the absence of holistic methodologies for determining these impacts.

SIDS often have existing disaster assessment methodologies and are accustomed to assessing post-storm damages and compiling financial costs. However, there are no corresponding ongoing and systematic assessments of these impacts and costs from slow-onset events.

“We’re a very reactive society at the moment, so we respond to events” – Caribbean respondent

The lack of methodologies for slow-onset event loss and damage assessment is further hindered by a lack of data. All respondents indicated that there is very little historical or baseline data that would aid in determining the extent of loss and damage.

While there may be partial datasets, there are gaps due to uneven data collection where most data are collected in urban areas or where data is not digitised or has been lost. INDCs also recognise the need for data collection, and state that existing efforts are insufficient.

“We’re aware that this is the kind of data that needs to be built up, but it’s still in raw form. Some of it has been collected in [the capital] but in outer islands we’re just starting to collect data on climate change impacts. There’s a huge difference between capital and outer islands” – Pacific respondent

“There’s no real consistent national data to monitor loss and damage on a regular basis. We often monitor through the Met Office temperature, winds etc. and that is recorded in an extreme event. But there’s no regular active monitoring of acidification, sea level rise or bleaching” – Caribbean respondent

Interviewees identified some ways they are currently responding to existing loss and damage, including the protection of coastal infrastructure and relocation of communities.

However, most SIDS lack specific policies or mechanisms that address loss and damage. Some existing policies on disaster risk reduction and climate change adaptation do include components of loss and damage, mostly on damages associated with extreme events. For slow-onset events in particular, the response remains ad hoc.

To summarise, SIDS see loss and damage occurring but have three common problems in managing it.

Firstly, the deficit of historical and baseline data – along with uneven coverage of less populated locations –  makes it difficult to attribute impacts specifically to climate change. The lack of data is also likely resulting in loss and damage that is going undetected.

Secondly, there are significant gaps in assessing the financial costs of loss and damage, particularly for slow-onset events. The lack of methodologies to determine these costs as well as the lack of collection of information on non-economic losses contributes to this issue.

Lastly, SIDS have few policies in place to address loss and damage, leading to an ad hoc approach that is inefficient in assessing and managing these impacts.

The current modalities of addressing loss and damage in SIDS appear to be inadequate, and will need to be improved as global temperatures, and impacts, increase. There is a need for significant capacity building in SIDS for data collection, policies and mechanisms to aid in assessment, monitoring and robust responses to loss and damage.