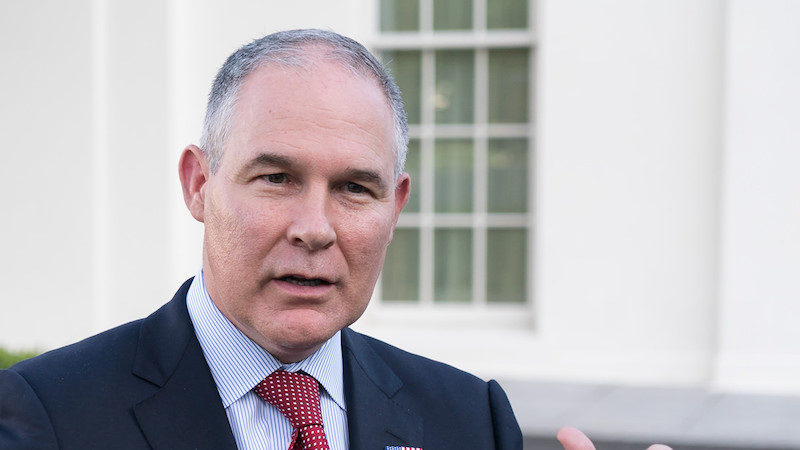 A US NGO has submitted a public record request for correspondence between Donald Trump and his top advisors that may have influenced his decision to withdraw the US from the Paris climate agreement.

The Centre for Biological Diversity (CBD) released a statement on Wednesday outlining announcing it was seeking “all reports and memoranda that the administration relied upon when it made its decision”.

The CBD has requested related emails, telephone logs and notes from meetings regarding the Paris accord between Trump, his secretary of state Rex Tillerson and head of the Environmental Protection Agency (EPA) Scott Pruitt.

If the request is successful, it will reveal details of internal wrangling over whether to leave the deal or stay in. The discord was widely reported during the first half of this year, as government and White House sources leaked regularly to the press.

CBD staff attorney Clare Lakewood said the freedom of information act (FOIA) requests were an attempt to uncover which arguments the president considered while making his decision.

“We need to know if Trump put any real thought at all into this profoundly dangerous decision,” she said. “Withdrawing from the Paris Agreement isolated America by highlighting this administration’s reckless contempt for our planet’s future. Americans have a right to learn how Trump officials were influenced by scientific ignorance and fossil fuel industry lobbyists.”

Tillerson, who previously served as chief executive of oil major ExxonMobil, publicly backed staying in the Paris accord during his senate confirmation hearing. But it is not known how Tillerson made his case in private.

Pruitt, who assisted fossil fuel donors while he was attorney general of Oklahoma, was a vociferous critic of the deal. Tillerson’s state department is responsible for the US’ interactions with the UN climate process. But on 1 June, when Trump announced his intention to withdraw the US from the accord, it was Pruitt he invited to give closing remarks.

Also invited to Trump’s announcement in June were representatives of conservative lobby groups, including the American Energy Alliance, the Heritage Foundation and the Competitive Enterprise Institute. All have close ties to the fossil fuel industry and campaigned against the Paris deal.

The Paris pact was struck in 2015 and agreed by every country on earth, bar Syria and Nicaragua. Under the terms of the deal, the US will not be able to formally apply to withdraw until 2019. Until then, it remains a full party.

The requests from the CBD were submitted to the Department of State, the EPA and the Office of Management and Budget.

The CBD makes regular FOIA requests as part of its campaigning and it is not the first time it has deployed the tactic against Pruitt since he took over at the EPA. In February, after the EPA failed to respond to a request for Pruitt’s daily schedule, the CBD successfully sued the agency. In May, it filed another lawsuit over “censorship” of climate information.