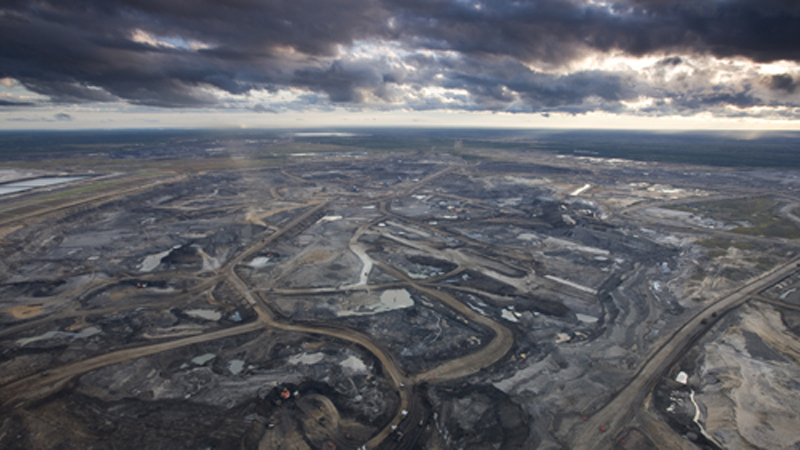 Expensive oil ventures like Canada's tar sands may not be viable in a 2C world (Pic: Flickr/Elias Schewel)

Exxon Mobil is under mounting pressure to address the collision course between its business model and climate protection, ahead of its annual general meeting (AGM) on Wednesday.

Shareholder activists are hopeful of securing a majority for a climate change resolution that would require the oil major to publish annual assessments of how international efforts to hold global warming below 2C – as agreed in Paris in 2015 – affect its business.

Last year, the resolution was supported by 38% of Exxon’s shareholders. A similar proposal to Occidental Petroleum passed with 67% support earlier this month, the first of its kind to succeed against board advice.

Two of the world’s largest asset managers, BlackRock and Vanguard, which between them own around 12% of Exxon, are considering voting in favour, sources told the Wall Street Journal. BlackRock was accused of hypocrisy last year for opposing the motion despite rhetorically championing stronger disclosure of climate risk. This AGM season, it sided with activists against Occidental’s management.

A coalition of investors responsible for $4 trillion in assets, led by New York State and the Church of England, declared their support from the outset. Proxy advisory firms ISS and Glass Lewis, which sway a large chunk of smaller investors, are also on board.

“All of these pieces together create tremendous momentum and really favourable circumstances for a successful vote on the 31st,” said Sue Reid, vice president of climate and energy at sustainable investor network Ceres, which is coordinating efforts.

For investors, the concern is that if oil companies are not aligned with the Paris climate goal, they could waste capital developing resources that will be “stranded” in the shift to clean energy. The money at stake includes ordinary people’s pension pots and insurance policies.

“This is not necessarily about putting major energy companies out of business, it is about preserving value,” Reid told Climate Home. “If [investors] don’t see companies responding to these very real concerns, that will beg some very serious questions about the value of continuing to invest in those entities.”

Exxon is resistant, insisting it already analyses the 2C threshold internally and the world still needs all its oil reserves. It is among the most bullish in the industry about future demand, foreseeing continued growth through 2040.

Shell predicts oil demand will peak between 2025 and 2030. At its AGM in the Hague last Tuesday, 40 minutes were devoted to a detailed presentation on climate change. There, debate has shifted to how fast electric vehicles could eat into petroleum’s market share – and whether the company should set sustainability targets (it is not there yet).

French company Total has explicitly ruled out drilling in the Arctic and cut back on tar sands extraction, on the basis such ventures are not compatible with a 2C warming limit.

None of the oil majors on either side of the Atlantic consider it likely that governments will do what is necessary to meet the 2C goal, seeing a carbon price as the clearest indicator of commitment.

Some analysts warn that clean technology could disrupt the oil sector faster than any regulation, however. The Carbon Tracker Initiative and Grantham Institute argue a 2020 oil demand peak is plausible, based on dramatic cost reductions in car battery and solar technology.

Swiss bank UBS expects the cost of owning an electric car to draw level with the traditional petrol-burning variety as soon as next year in the EU, 2023 in China and 2025 in the US. Maintenance and running costs are significantly lower, while the upfront price is declining rapidly due to advances in battery manufacturing.

Not all signs are in the activists’ favour. The election of US president Donald Trump on a platform of maximising US fossil fuel production gave Exxon political cover. Trump even appointed former Exxon chief Rex Tillerson as his top diplomat, putting him in a position to facilitate overseas oil deals.

But that has not assuaged investor concerns, said Ceres’ Reid: “It was very difficult to predict in advance how companies across the board and investors would react to the ‘Trump effect’. What we have seen is almost increased resolve… Companies and investors for the most part have stepped up like never before.”

Indeed, Trump’s determination to open up more blocks for oil drilling could actually increase uncertainty in the sector. It was the US shale oil and gas boom that triggered a global oil price slump in 2014, rendering many higher cost ventures uneconomic. Earlier this year, Exxon wiped 3.5 billion barrels of tar sands from its books that were no longer considered viable to exploit.

It is not just a matter for individual companies. Analysts from the Carbon Tracker thinktank warn that if the industry is systemically underestimating climate risk, it could be creating a “carbon bubble” that will eventually burst, destabilising the whole financial system.

A task force for the G20 Financial Stability Board led by businessman and former New York mayor Michael Bloomberg has published guidelines for all companies to report on the financial risks associated with climate change and the solutions to it. These will be presented at the next G20 summit in July for leaders to endorse.

While the guidelines are voluntary, experts at a climate finance event run by the Financial Times in London last Tuesday expected them to be integrated into financial regulations.

“We are now in the voluntary phase,” said John Roome, climate change director at the World Bank. “In the future we may very well see standardised requirements coming from various regulatory authorities on the nature of reporting that needs to be done.”

Not if oil majors can help it. A report by analysis firm IHS Markit, supported by BP, Chevron, ConocoPhillips, and Total, criticised the proposal on the basis it would distort the market.

Antonia Bullard, IHS Markit vice president for energy-wide perspectives, said: “Singling out one type of risk for separate treatment would prevent financial markets from accurately assessing, comparing and pricing all risks and opportunities. That would undermine, not support, the goal of improving capital allocation decisions and market functioning.”

By publishing detailed assumptions about future scenarios, the report said oil companies could create “a false sense of certainty” and get sued if the world misses the 2C target and those risks do not materialise.

That is “completely bonkers,” according to Alice Garton, senior lawyer at Client Earth. There are multiple climate lawsuits arrayed against oil majors, not least from Client Earth, but following the industry best practice as set out by Bloomberg’s task force offers a legal defence, she said.

Companies are already obliged to disclose “material” risks to their business – that is, factors that could hit future returns. For oil majors, climate regulations and clean technology are material threats, said Garton: “The disclosure regimes that cover material risk apply equally to climate risk. The task force is a voluntary initiative but that can be used as a framework to comply with existing laws.”

Like Reid, Garton told Climate Home that if companies like Exxon do not engage with investor concerns, they could see shareholders flee to safer bets.

“The institutional investors, if they don’t start seeing real change at Exxon, there is increasing legal pressure on them to divest,” she said. “If they keep hitting their head against a brick wall, are they doing the best thing for their beneficiaries by holding the shares? Some questions need to be asked as to whether engagement is working at Exxon.”