The US is becoming a “rogue state” as it backslides on hard-fought global pact, say international observers 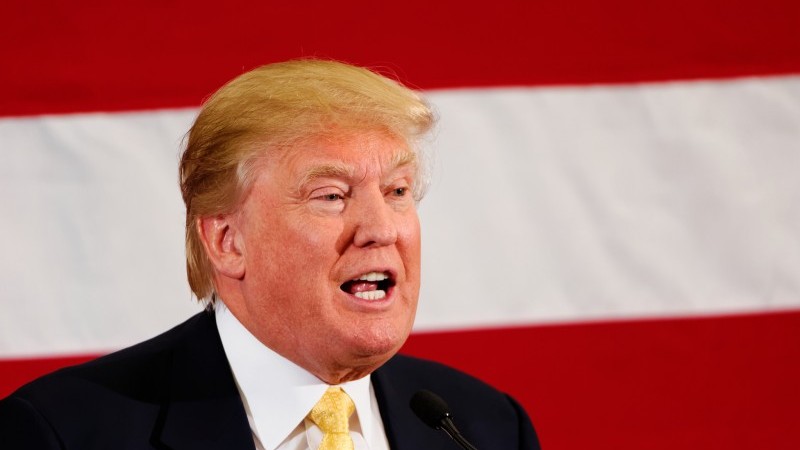 Donald Trump is backtracking on climate commitments made by the Obama administration (Pic: Flickr/Michael Vadon)

After weeks of speculation, US president Donald Trump has signed an executive order to dismantle the policies that made an international climate pact possible.

Flanked by invited coal miners and introduced by four members of his cabinet, Trump promised “the start of a new era in American energy” that would “put miners back to work”.

It fires the starting gun on a roll-back of Barack Obama’s clean power plan, methane rule and other measures that underpinned the US contribution to the Paris Agreement. A review of the “social cost of carbon” provides the basis for downplaying the economic harm brought by unchecked greenhouse gas emissions.

The order stops short of withdrawing from the Paris deal. Secretary of state Rex Tillerson, the former boss of Exxon Mobil, advocates keeping a seat at the table. A senior administration official told journalists the subject was “still under discussion”.

But if Trump fully implements his order – which the official said could take two or three years – US emissions are expected to flatline rather than fall, blowing the voluntary targets set by the Obama administration. It goes hand-in-hand with a budget that axes climate finance.

“Whether it formally pulls out or not, the fact is that [the US] will not live up to its commitments,” Joyce Mxakato-Diseko, the South African ambassador who chaired the G77 negotiating bloc of developing countries in Paris, told Climate Home.

“It is very disappointing, especially because in Paris we bent over backwards to accommodate the US and in the process weakened key aspects of the Agreement… We hoped that for once the US could be trusted not to renege, as it serially does, on international agreements.”

Obama made climate change a legacy issue, working closely with China’s Xi Jinping to forge a bilateral deal that toppled barriers to wider cooperation. With the world’s two biggest emitters on board, poorer countries agreed to contribute to carbon-cutting efforts, despite their lack of historic responsibility for causing climate change.

Still, the Paris deal was hard-fought, with US negotiators pushing back on some demands for financial support and recognition of the losses faced by communities vulnerable to drought, flood and sea level rise. Extracting concessions from Obama’s team was “like pulling teeth”, said Mxakato-Diseko. Now the US is defaulting on its side of the bargain.

Trump is turning the US into a “rogue state,” said Saleemul Huq, Bangladeshi climate scientist and advisor to countries on the sharp end of global warming. “The worst case scenario is being rolled out, not just on climate change but on many other fronts.”

As well as scrapping emissions curbs, the order overturns a requirement for federal agencies to build community resilience to global warming. From thawing permafrost in Alaska to coastal flooding in Florida, the impacts are starting to be felt.

“The people who suffer are the people of the US who are already impacted by climate change,” said Huq. “It is very, very sad for the people of the US to be governed by Mr Trump and his philosophy of trying to take the country back into the last century, when the rest of the world is going forward.”

Analysis: In Germany, a clean energy shift is politics-as-usual

Several leaders have reaffirmed their commitment to the Paris Agreement since Trump’s election in November, including president Xi. Joint initiatives like the US-China Clean Energy Research Center are headed for funding cuts, however, which risks hampering progress.

“China has made it clear that it is going to continue to move ahead with its own climate initiative,” said Barbara Finamore, Asia director at the National Resources Defense Council. “[But] there are going to be a lot of practical implications… that are going to make it more difficult for China to move ahead with some of its work – a loss of opportunity for both countries.”

Meeting the overarching goal of the Paris Agreement to hold global warming “well below 2C” depends on countries ratcheting up ambition over time, as clean technologies improve.

Rather than develop renewables, Trump has stated an intention to bring back coal mining jobs and unblock fossil fuel projects. That is popular with his voters – 69% support more coal mining, according to a recent Pew survey – but not as popular as wind and solar power, on 84% and 77% respectively. Separately, Yale Climate Opinion Maps show three out of four Americans back regulations on carbon dioxide emissions. 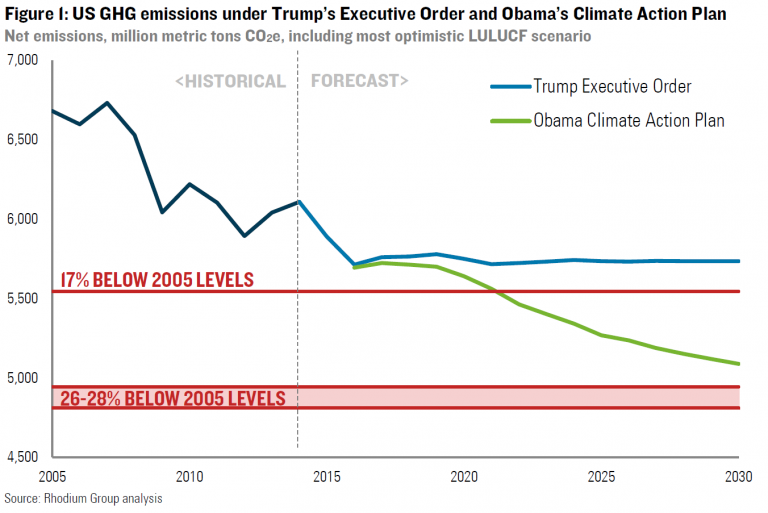 Analysis by economic consultancy Rhodium Group suggests his approach will see annual US emissions stabilise at 14% below 2005 levels, far short of the 26-28% cut Obama promised by 2025.

Christiana Figueres, who led the UN climate body through to the Paris deal, said undoing climate policies would put the US on the back foot. “Trying to make fossil fuels remain competitive in the face of a booming clean renewable power sector, with the clean air and plentiful jobs it continues to generate, is going against the flow of economics,” she said in a statement.

“I don’t know anyone who wants to breathe dirty air, who wants to worry about their water source, or who wants to leave a dangerous world to their children. And because we are all united by these common desires, I am optimistic that Paris will endure, with world leadership remaining resilient in its commitments to Paris.”