Republican cabinet nominees have been telling Democrats that they agree that the climate is changing. But their new language requires new questions 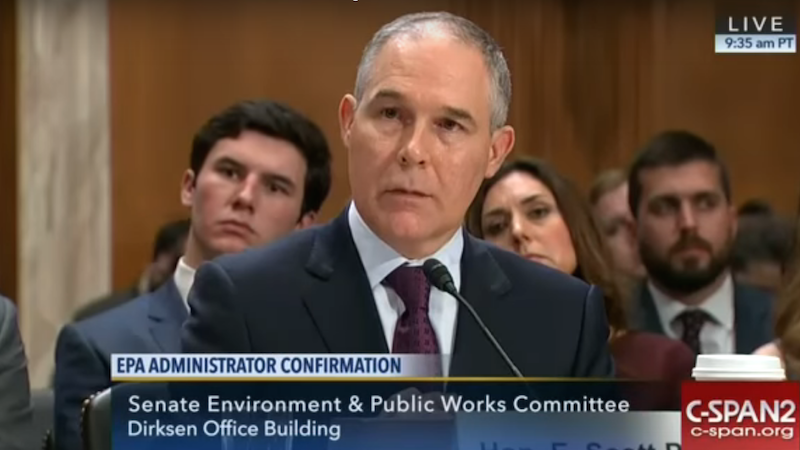 "The ability to measure with precision the degree and extent of that impact and what to do about it are subject to continuing debate and dialogue and well it should be,” EPA nominee Scott Pruitt told his senate confirmation hearing. (Source: C-SPAN)

Outright climate denial is passé. But those who champion the interests of fossil fuels have developed a nuanced language trick that they hope will allow them to wriggle free from physics a little longer.

Here’s how it looks:

This has been deployed, almost verbatim, by every one of Donald Trump’s nominees who could influence US climate policy. From Rex Tillerson to Ryan Zinke and Scott Pruitt.

Trump also presented a mangled version of this argument to the New York Times under questioning in November. Expect the same on Thursday morning from his pick for the energy department Rick Perry.

This consistency of political language doesn’t happen without organisation. In this case the architect has turned the arguments of the concerned many against them.

Bernie Sanders, while questioning Pruitt on Wednesday quoted a standard, often parroted, response to climate scepticism. He cited a 2013 study that 97% of scientific papers agree that humans are causing global warming.

Sanders embellished the author’s finding to add that these scientists also agreed that “it already causing devastating problems in our country and around the world”. That last bit he made up.

The study only said that 97% of articles “endorsed the consensus position that humans are causing global warming”. Look back to Republican points one and two, there is perfect concord.

So the ball game rests on point three. The Trump team have been listening closely to the scoffing of liberals who know they are backed by the weight of scientific research. And they have found the worm in that intellectual apple: relying on a scientific consensus of 97% as a lone proof of climate change is scientifically illiterate.

Among scientists, consensus does not equal certainty. History tells us that it takes just one person to overturn an established ‘truth’. In fact, science doesn’t work unless you have the possibility that your understanding of the world could be disproved.

This was exposed during senate confirmation hearings for Trump’s cabinet nominees. Many Democrats, thinking they could pin Trump’s would-be cabinet in a contradiction with their boss, asked them whether they agree that climate change it is a hoax. (Trump tweeted this view in 2014). To which they have all said no.

This was Sanders’ opening gambit with Pruitt. But the approach is weak. For one, Trump has disavowed that statement. It also fails to challenge the argument the Republicans are presenting, which is that they accept that most scientists agree that the climate is changing, but doubt remains about the rest. New questions are needed.

But as we dig down into more detailed aspects of climate science, killer arguments are harder to find because the truth is that the science is unsettled. That’s what happens when you try and predict the behaviour of a vast and chaotic system.

The degree to which humans are responsible

Science doesn’t do certainty, which makes it politically vulnerable. But it does quantify its level of confidence. So applying these numbers to the arguments by Republicans is a good place to start.

The IPCC – the UN’s climate science body – says it is “extremely likely”, which means 95% certain, that more than half of the observed warming is being caused by our penchant for carbon emissions.

What to do about it?

Here, the second follows the first. If human emissions are the “dominant cause” of climate change. Then the IPCC explains the obvious: “Limiting  climate  change  will  require  substantial  and  sustained reductions of greenhouse gas emissions.” Because one follows from the other, the degree of certainty (95%) is the same.

The effects that warming will have is uncertain

Here the weeds get longer. Complicating things is the heterogeneity of the impacts. Some places will see less rain, some more. This week a model of the change in mild weather showed that poor countries around the equator would lose good farming weather, whereas those in Europe and North America would gain it.

The only way around this is to identify certain impacts and speak about the confidence scientists have in their findings.

For example, the IPCC says it is “very likely”(more than 90% confidence) that “heat waves will occur more often and last longer, and that extreme precipitation events will become more intense and frequent in many regions. The ocean will continue to warm and acidify, and global mean sea level to rise.”

At State, Tillerson could get Exxon off human rights charges

It is also “very likely” (more than 90% confidence) that humans have contributed to the loss of Arctic sea ice observed since 1979.

These are useful tools. But there is a final response, which allows us to return to the 97% argument and appreciate it for what it does tell us.

“Many argue that consensus means nothing, and they have a point,” says Reto Knutti, a lead author on the last major UN climate science review. “It only took one person to argue against the overwhelming consensus that the earth is not in the centre of the universe, or that continents move, or that time is not absolute. If your argument is correct, it does not matter how many people disagree with you. On the other hand, overturning the consensus of thousands of scientists and tens of thousands of studies requires extraordinary strong evidence.”

The sheer weight of research the 97% study reviewed – the researchers surveyed more than 4,000 articles – means climate science is not vulnerable to a Galileo or Darwin, whose ideas emerged in contexts where the consensus view was not underpinned by a century of modern scientific experimentation.

An alternative hypothesis would have to overturn thousands of pieces of research across dozens of disciplines. That doesn’t mean that such a theory cannot emerge. But where is it? Sanders continued his questioning of Pruitt and eventually he got to the point.

“Why is the climate changing?” said Sanders. To which Pruitt could only respond: “My personal opinion is immaterial.”