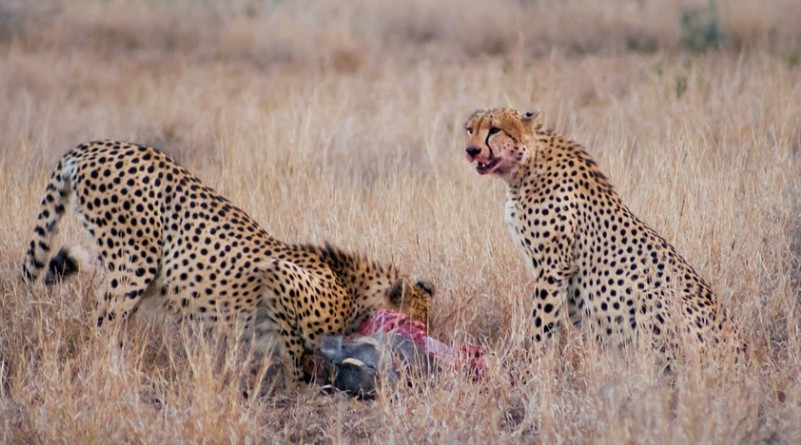 By Sipho Kings in Skukuza

The cheetah darted across 90m of veld to catch the startled impala before it could zigzag away.

But it has a problem. The small victim is alive. Its desperate calls are attracting the attention of other predators and the cheetah has no energy left.

In the 39C heat, the cheetah needs at least half an hour to recharge after the burst of speed. That normally means hunching down so the ground compresses its chest, speeding up recovery. But two hyenas have come to see what the commotion is, driving the cheetah away.

Its failure is a temperature problem. The cheetah’s evolutionary advantage is its ability to clock 110km/h over a few hundred metres. But increasing temperatures increase the costs of these bursts. It’s such an acute obstacle that cheetah will not run when the temperature passes 50C.

In the southern section of South Africa’s Kruger National Park, the temperature has been rising for the last few decades. The park predicts that the average will rise by 3C from pre-industrial levels by mid-century, and double that by 2100. Days when the temperature passes 40C and hovers close to 50C are expected to enter the double digits each year.

That’s not just a problem for cheetah. A few hours and a hundred kilometres later, at Skukuza – the park’s main administration hub – the temperature is 42C.

Its records show that in the first few months of this year, when the drought was at its worst, almost no rain fell. Sabie River, which forms the camp’s one boundary, shrunk to a trickle. Now Skukuza is covered in a lush green, from the grass at its golf course to the leafy acacia trees. Heavy, but intermittent, rains in the last two months have broken the back of two years of drought.

For the scientists based at the camp, it was a harrowing time but also a great chance to gather data. Izak Smit, science manager for systems ecology, GIS and remote sensing for Kruger, says drought is a common occurrence in the park – South Africa’s largest animal sanctuary. The last bad one was in 1991, when 16,000 buffalo died. “We learnt from that,” he says.

Working with people upstream on rivers like Sabie, the park made sure that everyone reduced water use so everyone had a share. But that hasn’t stopped hundreds of animals dying, particularly those that graze for their food. He says that “SANParks adheres to a limited intervention approach,” which means nature must take its course. 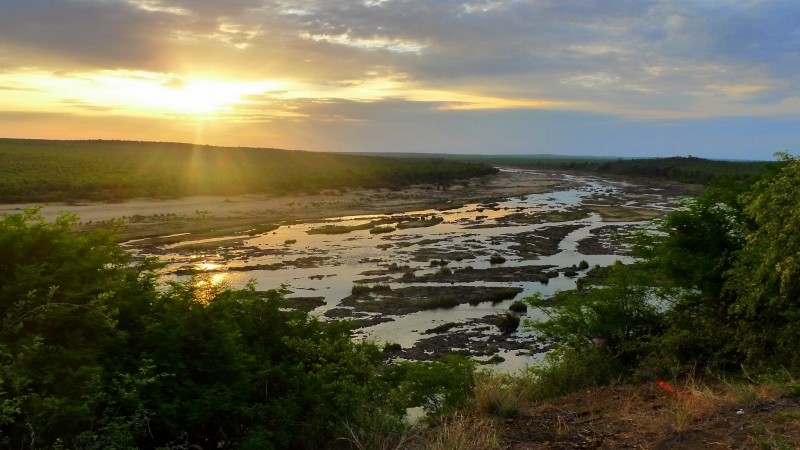 Rivers slowed to a trickle in the drought (Pic: Flickr/Armin Rodler)

The north of the park, which has traditionally been drier and fed by fewer rivers was worst hit. Officials killed 350 hippo and buffalo to ease the pressure on water resources. The meat was given to communities living on the boundaries of the park, who lost two maize harvests to the drought.

Temperatures at Skukuza have been monitored since 1960. The last December, January and March were among the hottest months recorded in the last five decades. Between July 2015 and June 2016, 28 days surpassed the 40C mark – only eight were that hot during the 1991 drought.

That increasing heat is going according to climate predictions for this north-eastern part of South Africa, bordering Mozambique and Zimbabwe.

Alarm bells started ringing in 2001, when the first comprehensive research on climate impacts for the park was done by the South African National Biodiversity Agency. This calculated that temperatures would rise by an average of 3C by mid-century. That would make the northern half drier, while the south would get wetter but would receive most of this rain in short and violent spells.

Plants and animals would be unable to move ahead of the change, the agency warned, predicting it would kill off 59% of mammals, 40% of birds, 70% of butterflies, 80% of other invertebrates, and 45% of reptiles.

In 2008, then environment and tourism minister Marthinus van Schalkwyk warned: “The damage done to one of South Africa’s most celebrated conservation areas could be shattering.” 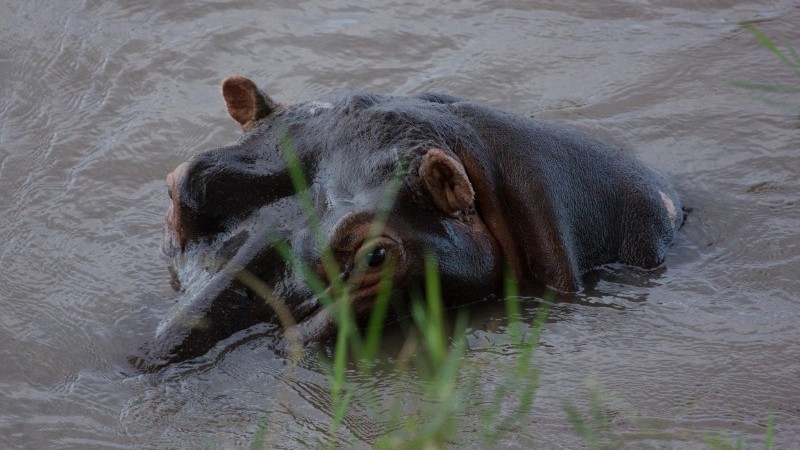 A hippo in the Sabie river (Pic: Flickr/Michael7070)

Those projections were calculated on a business-as-usual scenario. New climate projections, factoring in adaptation plans and the possibility of lower global greenhouse gas emission, see these numbers roughly halved. But that is only if the measures are put in place.

Stefani Freitag-Ronaldson, general manager of scientific services at the park, says the observable climate change has been gathering pace at the park. “We are seeing quite fundamental changes in when it rains and what sorts of temperature we get at different parts of the year.”

While the winter in this part of the lowveld is normally mild – the park sits on the Tropic of Capricorn – it has been getting increasingly warm. “A park is necessarily an artificial boundary for species but the ones inside our fences are generally adapted to the conditions.”

That means the animals thrive in the humid heat, growing in numbers so that they survive the periodic droughts, she says. “But now the overall conditions are starting to change and where species cannot move to keep track with that, they will struggle to survive.”

For large animals, like hippo and buffalo, their sensitivity to change – especially with predictions of more frequent and prolonged drought – means they don’t do well in any of the future scenarios modelled by the park’s scientific teams.

But the people tasked with observing the incremental changes in climate in the park – its rangers – have their hands full with another task. Kruger has around 9,000 white rhino, 40% of the world’s remaining number. That makes the park an enticing target for poachers. Over 800 were killed last year.

Poaching footsoldiers are easily recruited in villages, normally across the border in Mozambique, thanks to the drought taking away their livestock and crops. Less vegetation in the park then makes their job easier, with rhino forced to use the small number of waterholes that still had water during the drought. December is the busiest month of the year, something rangers link to the poacher’s desire to have extra spending money for Christmas.

Kruger has mobilised a massive effort to curb this. Skukuza is home to helicopters, drones, spotter planes and tracking dogs. A wide area surveillance system – the Postcode Meerkat – was just launched to track human movement in the park. The army also operates in the area. 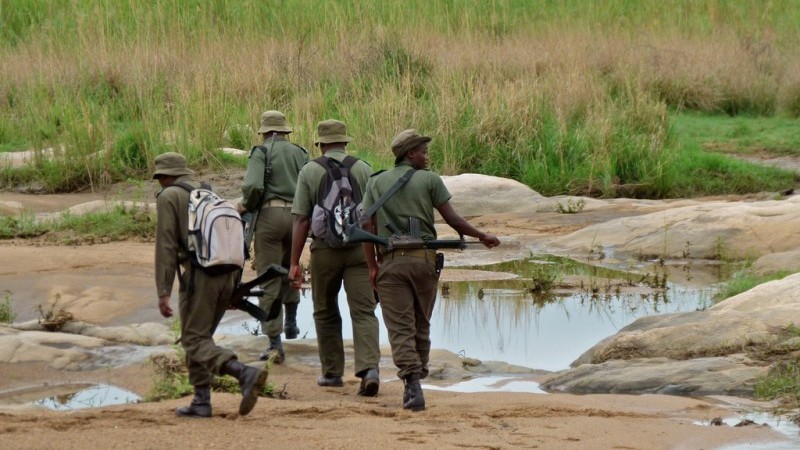 All that effort takes time away from conservation. A ranger based in Phalaborwa, five hours north, says their anti-poaching work necessarily creates blindspots. “We used to walk this park and know how everything was doing. Each ranger had their section and knew it like the back of their hand.”

That meant they could record how climactic changes were changing things as small as dung beetles. Now the rangers are being trained to use drones and conduct surveillance operations so that they can ambush and disarm poachers. This ranger says: “I feel for our park now because we obviously overlook some problems, especially when you see that things are changing in the environment.”

Their worry is one privately shared by officials in the park when they talk about the looming changes wrought by a changing climate.

South Africa is, per capita, one of the 20 highest carbon emitters in the world. Its contribution to the Paris climate deal is “inadequate” and “not consistent with limiting warming below 2C” according to NGO Climate Action Tracker. The country is building the two biggest dry-cooled, coal-fired, power stations in the world.

While the Paris Agreement puts the world on a cooler trajectory than business-as-usual, the national contributions do not tot up big enough carbon cuts to stay within 2C.

For Kruger National Park, it means change will come too fast for many species to adapt.

Mountain gorilla: This is a species that should be an example of how to cover all your bases when it comes to climate change. They eat 140 different species of plant so can survive a lot of change. But their central Africa range has been overrun by human settlements, with only 800 now left in the wild. As climate change and population growth puts more pressure on these settlements, projections are that hunting will increase and their habitat will be cut and burnt.

African elephant: Elephants have adapted well to live across the continent, surviving in nearly 40 countries. They eat all sorts of plant species and live in both wet and arid conditions. But they need 300 litres of water a day to survive and their reproduction is linked to rainfall. Populations in central Africa – where more rain means they should actually be safe from the worst of climate change – are being decimated by poaching, while their safer strongholds in southern Africa will become inhospitable with increasing drought and heatwaves.

Giraffe: The population has shrunk 40% in the last 30 years – some 60,000 giraffes – according to the International Union for the Conservation of Nature’s latest “red list” of endangered species. The union blames habitat loss through farming and deforestation, as well as hunting for meat during armed conflict. Their demise is a study in how the less valuable a species is for tourism, the harder it is for governments to justify their survival.

Cheetah: Numbers have dropped 30% to 7,500 in the last 40-years. They used to range the continent, but have been hemmed into small areas thanks to human expansion and their perceived threat to livestock. For rural communities, cattle, sheep and goats are more valuable than wildlife and cheetah are a threat. That means they have to survive in wildlife reserves, where they must compete with lion and hyena for food. Their speed means they can get to prey quickly, but they overheat quickly and then struggle to defend their catch from other predators. They also do not run when temperatures pass 50C, a temperature that will become increasingly normal in places like the Kruger National Park.