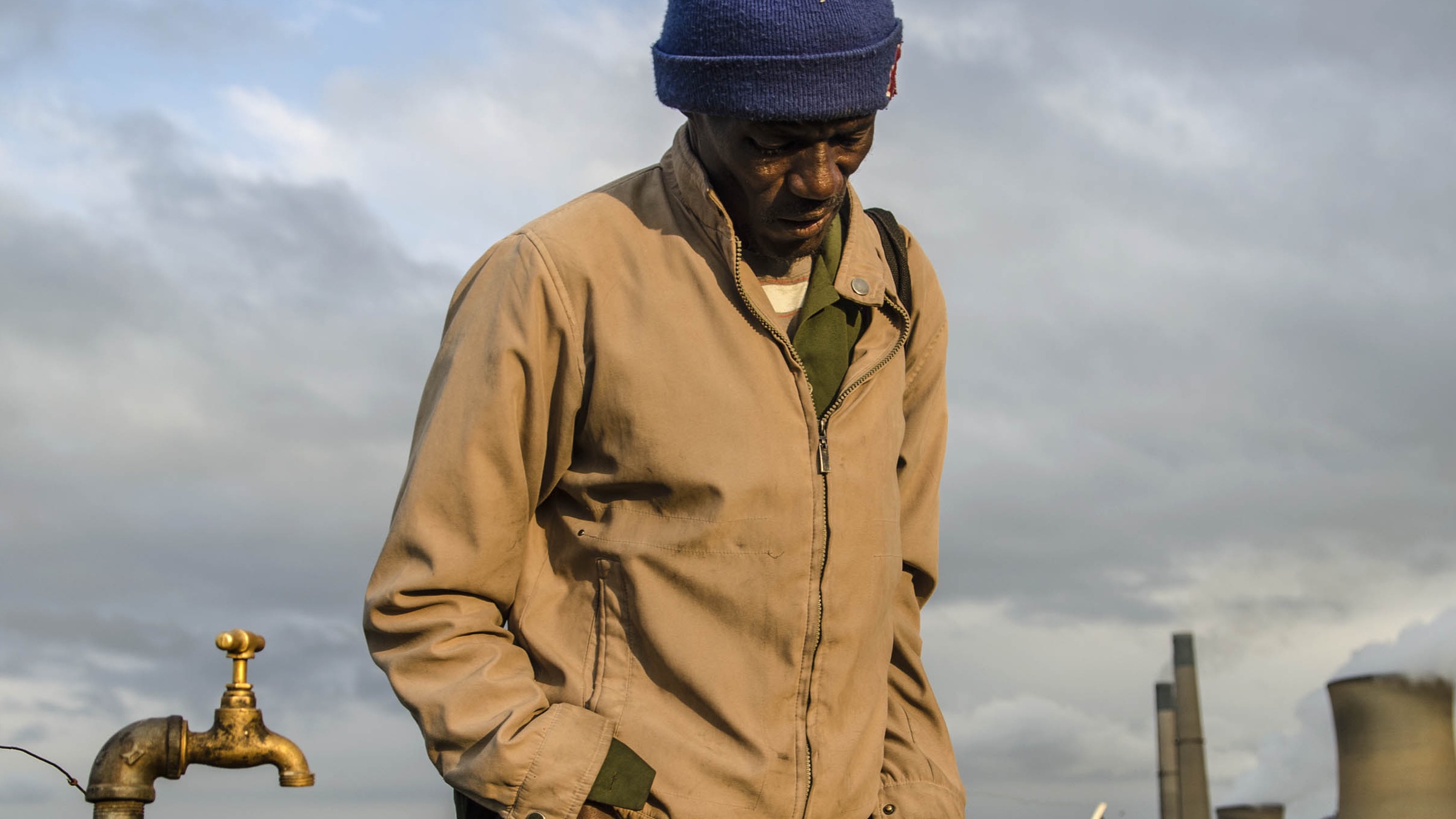 Robert Woods, a contractor working at the Kriel power station, lives in a shack house just outside the station. Kriel, a small town in the Nkangala district, is located just outside of Eskom's Kriel Power Station and several coal mines (Photo: Styler Reid)

By Sipho Kings in Johannesburg

South Africa’s environment minister has turned down objections to the country building two new coal-fired power stations which will add 16-million tonnes of carbon dioxide equivalent to the atmosphere.

They will also use up water in areas that are already water stressed, at a time when the country is toying with its third year of drought.

The minister’s decision came on the second day of the COP22 UN climate summit in Marrakech, where South Africa is negotiating on the nuts and bolts of how the UN’s Paris climate agreement will play out.

This put countries on the same path to ensuring that global warming is kept below 2C on pre-industrial levels. As part of the Africa group, South Africa has consistently argued that the goal should be 1.5C because anything more is catastrophic for the continent.

Projections by the World Bank show that average global warming is doubled in Africa’s interior, while the continent has little capacity to adapt to that change.

But South Africa has been roundly criticised for its actions not matching up to its rhetoric. It ratified the Paris Agreement in early November, and has a wide range of local initiatives to lower emissions and help people adapt to climate change.

Its Nationally Determined Agreement – the climate plan it submitted to the UN last year – has, however, been called out as not being ambitious enough.

Analysts at Climate Action Tracker rated the contribution as “inadequate”, saying: “It is not consistent with limiting warming below 2C.” The contribution is so vague as to allow South Africa to increase its emissions by anywhere between 20% and 82% on 1990 levels. That translates to either 198-million tonnes of carbon dioxide equivalent, or 614-million tonnes.

This goal stems from South Africa’s pledge under the Copenhagen Accord in 2009 to reduce emissions on business-as-usual levels by 42% by 2025. Climate Action Tracker said: “If most other countries follow South Africa’s approach, global warming would exceed 3-4C.” 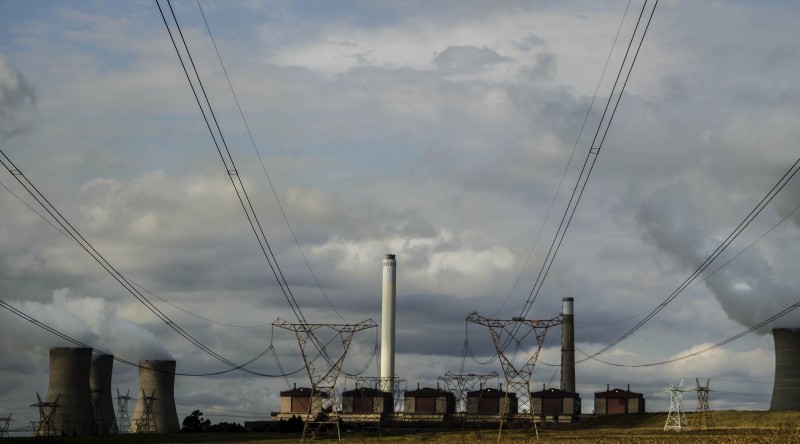 Kriel, a small town in the Nkangala district, is located just outside of Eskom’s Kriel Power Station and several coal mines. The town is geographically located in close proximity to a dozen coal power stations. 2014/04/16 (Photo: Styler Reid)

Whether it’s the upper target, or the lower target, that is reached is down to the choices made in South Africa’s power sector. This is responsible for half of the country’s carbon emissions of just under 450-million tonnes of carbon dioxide equivalent a year, according to the local Council for Scientific and Industrial Research.

Those decisions are made at the Department of Energy. It has been pushing for a new nuclear build, to replace the ageing fleet of coal-fired power stations that are run by the state-owned utility Eskom.

But, at the same time, it has called for bids from private companies to build coal-fired power stations. This borrows from the platform for bids that was created for South Africa’s 6 000MW independent renewable energy build.

Once that department invites bids, it is up to companies to sketch out their environment impacts and get authorisation from the Department of Environment Affairs. It is the granting of these authorisations that civil society group groundWork objected to.

The new coal-fired power stations are a product of an age when coal was profligate and climate agreements hadn’t made them unpalatable. Medupi and Kusile were laid down in the mid-2000’s so they could fill the gap when South Africa’s older power stations started decommissioning in the 2020s.

The need for even more stations then came about as a result of the panic from the country’s rolling blackouts in 2009. The national energy plan – the Integrated Resource Plan 2010 – envisioned more coal, built quickly, to ensure this never happened again.

But that plan has not been updated to keep track with climate agreements, and price changes for renewables. An update will be released later this year, but leaked versions show that it heavily favours an expansion of South Africa’s nuclear capacity at the cost cost of renewable options.

Most media reports link this to a political drive for nuclear, linked with the patronage that stems from large industrial builds. That would see 9 600-megawatts of nuclear capacity added to the country’s sole nuclear plant at Koeberg in the Western Cape.

That nuclear imperative is at odds with the best science for what should replace baseload in South Africa. Research released last week by the Council for Scientific and Industrial Research’s Energy Centre argued for a mix of renewables and peaking plants.

Thanks to its high levels of solar radiation, and coastal wind, these two options – backed up by gas or diesel open cycle turbines – could create a stable grid. Critically, this mix would also provide electricity cheaper than nuclear or coal, saving five-billion pounds a year in energy costs.

A previous objection to the granting of an environmental authorisation for Thabametsi, an independent coal-fired power station, resulted in the environment minister telling the mine to do a climate change impact assessment. This was a first for South Africa.

But this time, groundWork’s objections were dismissed. If construction does go ahead, the two power plants will join two other power stations under construction in adding 90-million tonnes of carbon equivalent emissions to the atmosphere. The other two, Eskom-owned Medupi and Kusile, will be the world’s largest dry-cooled, coal-fired, power stations in the world. Each will have a capacity of 4 800-megawatts.

Government says emissions from the new plants will be reduced because of their newer technology. Their overall impact will also be reduced as Eskom’s older fleet of coal-fired plants starts to retire in the 2020s and 2030s. But the environment impact assessments of the plants does not include their wider footprint, specifically in terms of the coal mines that will be built to supply them.

Critically, serious concerns have been raised about the impact these stations will have on water availability in the already water scarce areas where they are being built. Eskom uses 2% of South Africa’s water and is the only entity guaranteed supply, regardless of circumstances.

Medupi and Kusile have meant the construction of water transfer schemes to bring them water. This water comes from the Vaal river system, which means it falls hundreds of kilometres away in Lesotho and the KwaZulu-Natal province. In the case of Medupi, the Mokolo Crocodile Water Augmentation Project will take water from Gauteng, at an initial cost of R11-billion for construction.

But water is scarce in Gauteng. Official climate projections – contained in South Africa’s national climate change response strategy – show that drought will become more prevalent and more severe. Projections from the 2030 Water Resources Group show that demand for the whole country will exceed supply by 17%, a situation that will be ever-more acute in Gauteng.

Medupi’s demands will also dramatically increase when it installs flue-gas desulphurisation technology. This technology decreases sulphur emissions, but triples the plant’s water use. Farming rights in the area have been bought up to access the water rights that come with the farms, in order to supply Medupi’s demand.

Concerns over this impact on water resources were so great that the World Bank investigated it when granting a loan to help Medupi’s construction. This noted that “potential project-induced harm” included “significant water consumption raising issues of both scarcity and pollution in the local area”.

The bank went on to note that “due consideration should have been given to probable future projects in the area, e.g. additional mines and coal-fired power stations”.

That reality has come to pass, thanks to environmental authorisation for more coal-fired power stations being granted.