Water-rich Lesotho has long lubricated South Africa’s burgeoning population, but when drought struck in 2016, it was the residents of Katse village who suffered 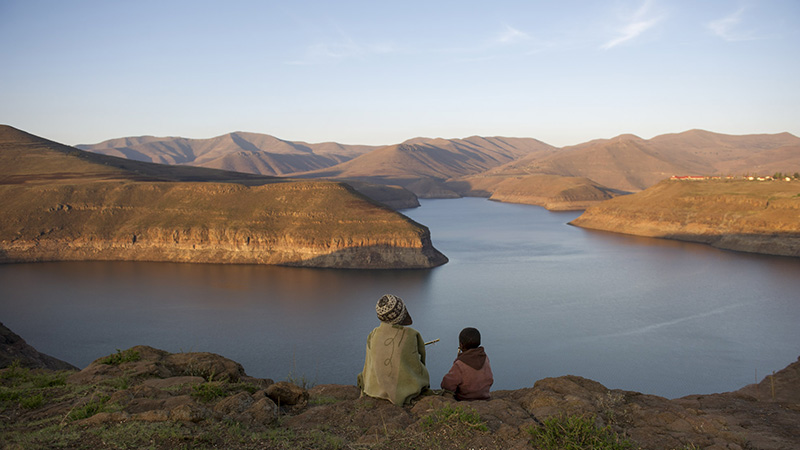 Herd boys along side the Katse dam - most of the water in Katse dam is sent to South Africa (Pic: Delwyn Verasamy)

By Sipho Kings in Katse, Lesotho

Farmers in Lesotho are using the last reserves of energy in their starved cattle to plough fields, in the hope that the long-delayed rains do come.

They haven’t and a third year of drought beckons. That puts 700,000 people in danger of starvation by early 2017.

Water, netball and basketball are the three pillars of evening life in Katse village, Lesotho. The basketball happens on a floodlit court, made for the contractors that built the nearby Katse Dam.

The netball doesn’t have the luxury of a formal court, and takes place on a field that has been flattened by running feet. It ends when the sun sets.

Some 40 women take part, either in playing or resolving disputes from the sidelines. During one argument over whether someone ran too far with the faded white ball, one admits: “We don’t really play by international rules.”

The noise of both sports echoes across the village, mixing in with the sound of cattle bells and general discussion. It then bounces off the 2,400m tall mountains that form the community’s southern boundary.

The dam creates the other boundary, thanks to the 140m sheer drop down to its surface. That leaves a two kilometre strip of rocky ground for farming and homes.

The former take up the majority of land. Around 75% of the local population relies on rain-fed agriculture. The grey strips of fields stretch across any possible surface, giving the Mountain Kingdom a feeling of being full.

That means Katse village is squished into a small area along the spine of one of the ridges that rises into the mountains. The ground is too rocky for crops, and frost means vegetable gardens cannot use the space. 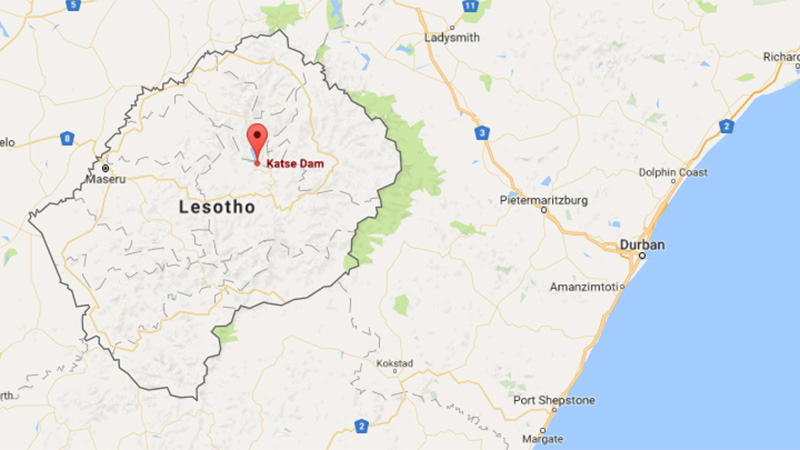 Located in central Lesotho, the Katse dam was built in 1996 (Pic: Google)

With night settling in, the ball players join the rest of the community in queuing for water next to the village’s one working tap. Its reservoir was built too low down to get water to the forever-dry taps higher up. Most homes are higher than the tap.

Dozens of white, green and yellow water containers reserve spots in the queue. Most are carried by children, who can barely lift the containers above the ground. These therefore knock against the uneven paths and spill, leaving trails on the wet ground.

A fortunate few strap containers onto donkeys, or push wheelbarrows. Three battered bakkies take water to homes more than a kilometre from the tap.

“They promised when they built the dam that we would get water all over the village.” Nchai Sitsane wears a baseball cap, more to match his American-style getup than for any practical reason – the sun has now set. He doesn’t make a concession to the biting wind, leaving his leather jacket unbuttoned. “But our parents didn’t follow up and make sure that happened, so here we are.” 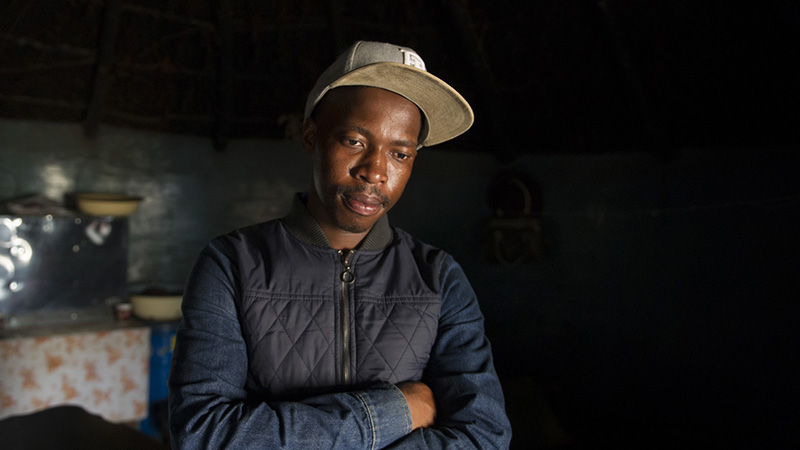 His father – a miner in South Africa – passed away, as did his mother, before water came to the village. “Life here is about survival, more than about making it.”

He stops talking to look at the dam, now a dark strip to the north. It is the result of a 1986 agreement between Lesotho and South Africa.

The latter needed to solve a problem: the economic hub of Gauteng needed water and getting it uphill from KwaZulu-Natal would use up too much electricity (and money). Lesotho had lots of water, thanks to its 3 800m mountain peaks and winter snow melt, but no dams.

The 185m tall Katse Dam wall, which curves across a valley where two rivers meet, was the result.

Africa files: the best reporting on the continent’s climate crisis

Lesotho gets around R700 million a year (US$51m) from selling that water; 10% of government revenue.

The government says the money has meant new schools, roads and electricity in previously cut-off communities. Turbines in the system generate 75-megawatts of capacity, almost enough to power the whole country.

But people in Katse say they have seen little benefit from selling their water. Rain last fell in any volume in 2013. The worst drought in living memory has ensued, wiping out two season’s worth of crops. 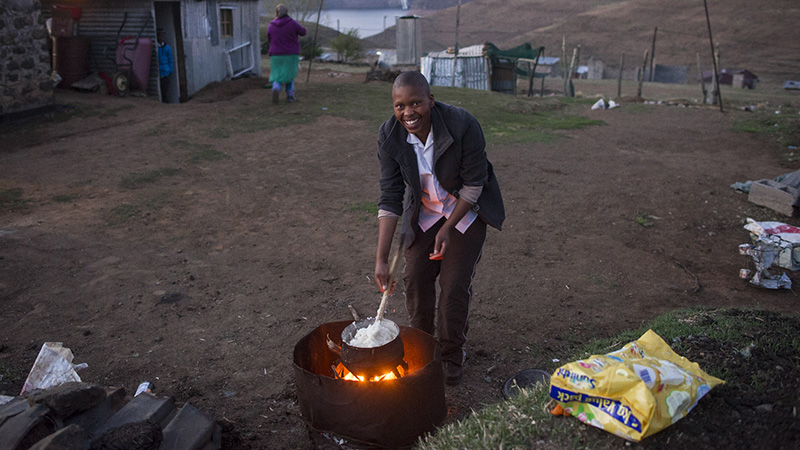 That streak looks set to continue. El Niño – which drove the drought in the southern hemisphere – has faded away and Nasa predicts that its wet counterpart, La Niña, will probably not materialise and bring heavy rains to fill dams.

Rainfall projections for the region from the South African Weather Service say the usual spring rains will probably not materialise. At best, good rains will come by Christmas.

This is because the climate is changing, undoing the predictable patterns that farmers rely on. The UN’s Intergovernmental Panel on Climate Change predicts that rainfall across the country will decrease by up to 20%.

That decrease will also come with a shift in rainfall patterns; more rain will be concentrated in shorter and more violent spells. For a mountainous country this is predicted to mean a great deal of topsoil washing away.

A taste of that reality came during 2012, when Lesotho was hit with floods. These flooded fields and saw topsoil ending up in rivers and dams. 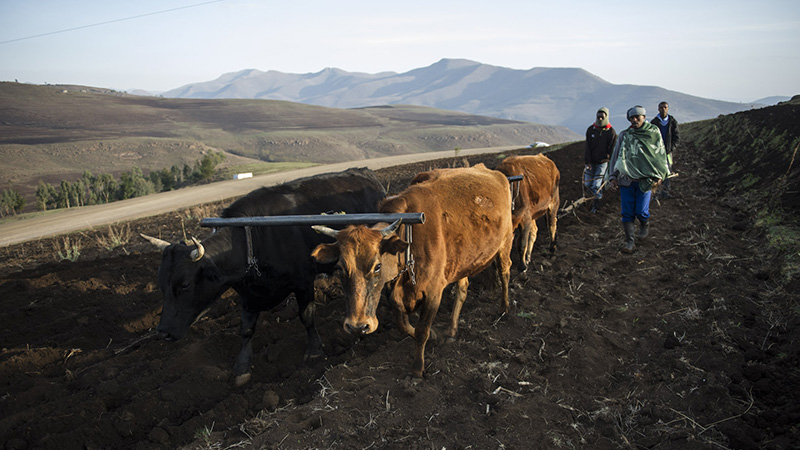 But in Katse the fields are being ploughed anyway. Four-oxen teams pull shiny metal ploughs, guided by one man while another follows, dropping seeds into the disturbed ground.

A product of volcanic activity, this soil gives farmers here an advantage over their counterparts in Lesotho’s lowlands. But soil needs rain.

“This place should be so wet now,” says Pakalitha Mokhele. His white gumboots – a fixture on the feet of all farmers here – sink into the ground whenever he puts his weight down.

Some rain fell last week, thanks to a cold front sweeping in from the south. Those that planted early have been rewarded with green maize shoots popping out of the ground. “

That isn’t enough. We will have real problems now without the rain.” Mokhele pushes his tall stick into the ground so he can free up a hand to adjust the blanket wrapped around his shoulders. 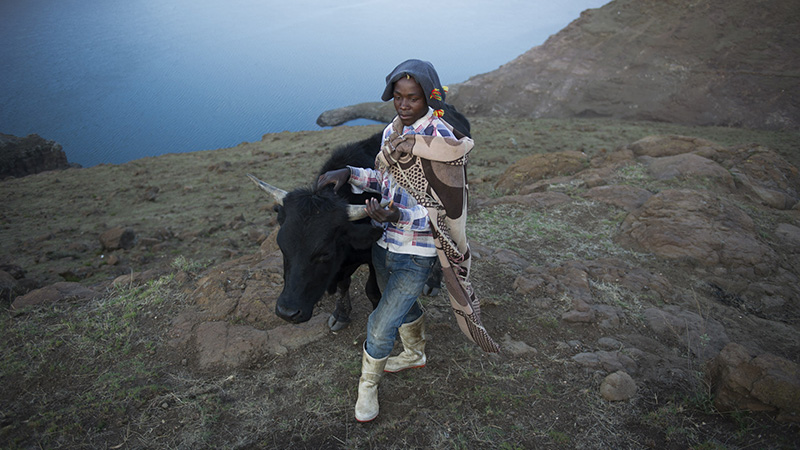 Even in spring, the morning temperature stays in the single digits. Pointing to the scrappy cattle pulling his plough, he says: “Without the rain there will be a lot of meat in October.”

The herbivore’s rib cage protrudes from under a patchy brown hide. There is little nutrition left in the local grass.

For the cattle, water is less of a problem. A tap further down from the village’s reservoir pumps water into a cement trough. Sheep, donkeys, cattle and horses all take turns shuffling each other along so they can drink.

Their largesse makes a muddy pool around the trough, which gives off water into a sliver of a stream. This makes its way down a nearly dry watercourse, down to Katse Dam. 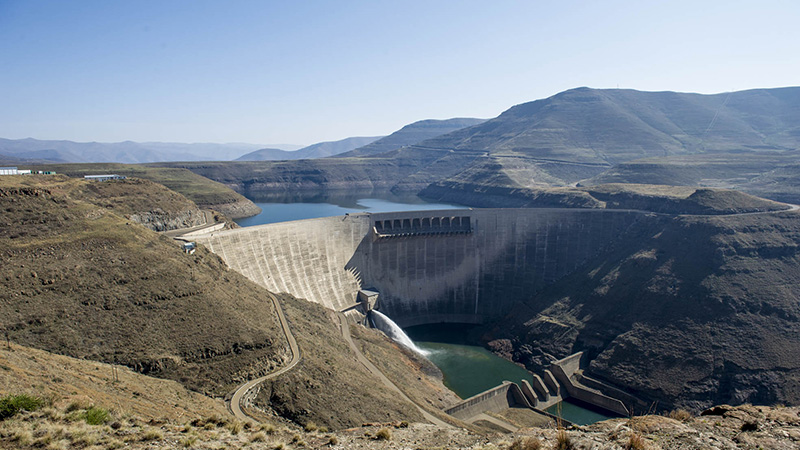 Standing next to where one of these streams used to drop down the 140m to the dam, Terrence Moshoeshoe jabs his well-honed fishing knife into the crusty grey earth.

“They are releasing too much.” The water level, he says, was a third of a metre higher yesterday. Lesotho has to keep releasing water, helping to stave off a full-blown drought disaster in Gauteng, Mpumalanga and the Free State. Katse supplies the Vaal Dam in Gauteng.

It is down to 30%. Emergency water releases have also sent water flowing the other way, to the Eastern Cape. But the cost to the dam means it is at 52% – its lowest-ever level.

A strip of recently exposed white rock runs along the dam’s winding cliff face – like the layer of grime left after water is let out of a bathtub. The water should be 26m above the point where Moshoeshoe is standing.

“People on that side [South Africa] don’t appreciate what they are taking from us,” he says. Like others in the village, he sees the dam as a form of South African colonialism – a project put here to help that country at the expense of locals who would otherwise benefit from the rainfall. “It is our resource. Where is our benefit?” 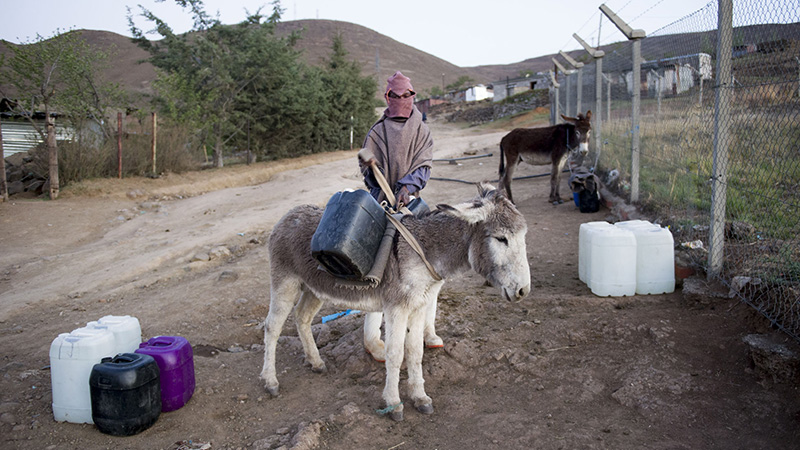 A boy collects water at dusk which he places on his donkey to take home – there is only one tap in the entire village of Katse (Pic: Delwyn Verasamy)

A new dam is being planned to supplement Katse, in the second of five phases to develop Lesotho into a full-blown water resource for the whole region. Some of this will also go to Botswana and Namibia. But this expansion has been delayed for at least two years.

An official working at the dam shakes his head when unofficially queried about the delay. “Ministers always want their money.” That’s a reference to reports that South Africa’s water minister, Nomvula Mokonyane, has delayed the project because she wants to appoint her own contractors. She denies the claims.

The delay could be disastrous for Gauteng. The province’s water projections show that demand will exceed supply by 2020 – when the dam should have been finished. This is if there isn’t another drought.

It also leaves the 11 000 people that will be directly and indirectly employed by the project in limbo. 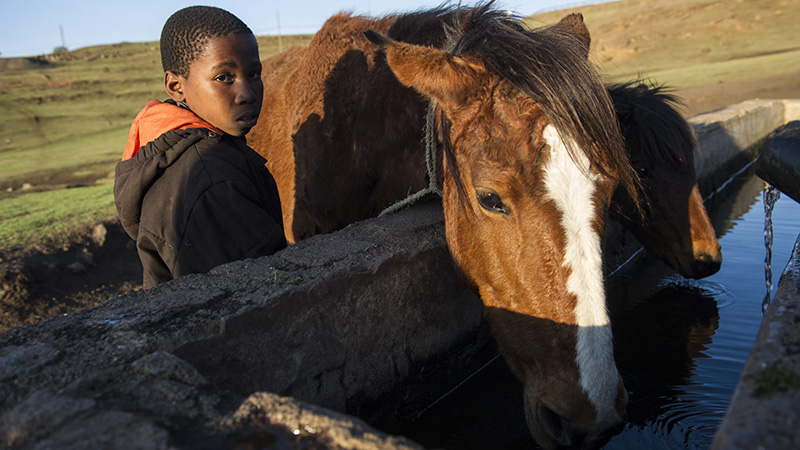 With precious little industry around Katse – the only big employers are the dam and local trout farms – this sort of delay means people do not have an income.

In times of drought, an income is the only way people can get food. Some 20 villagers from here used to do the two-day hike over the mountains to Ficksburg in South Africa to go work in that country’s mining industry.

Outside jobs like this used to make up 20% of Lesotho’s GDP. But a downturn in that industry means only four men in the village still work at mines and send money home.

This means it has to rain in Lesotho’s highlands. The seeds are in the ground. Entire communities are waiting for two years of drought to come to an end.

If the country’s most valuable natural resource doesn’t start falling from the sky, the World Food Programme warns that 700 000 people will need food assistance through to April 2017. South Africa and Botswana will also run dry, as the water level at Katse Dam continues to drop. 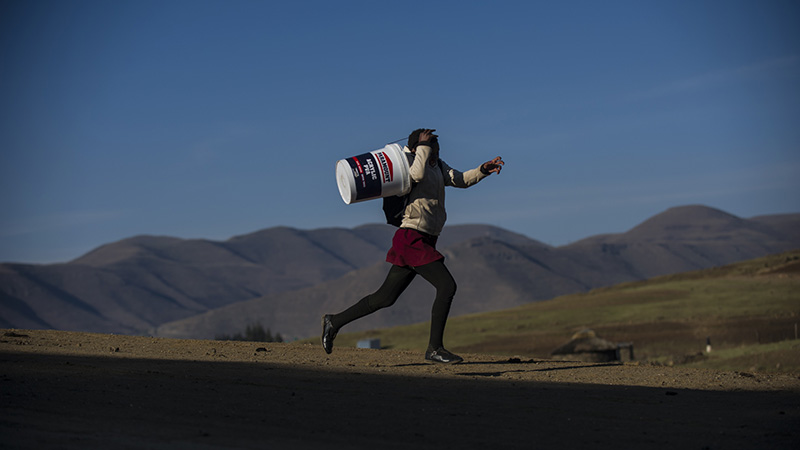 A child runs with a water bucket from school to collect water (Pic: Delwyn Verasamy)

The rest of southern Africa is facing the same problems as Lesotho, except its neighbouring countries don’t have as much water. Average rainfall in the semi-arid region is, at best, half the world average of nearly 1,000mm a year.

Namibia, Botswana, Zimbabwe and the rest of the region has declared a drought disaster. The World Food Organisation estimates that 10 million people will need emergency food aid in the region. This is if it rains and maize crops grow in time for the early 2017 harvest.

Climate change projections – collated in the latest United Nations Intergovernmental Panel on Climate Change report – paint a picture where more of the same can be expected.

The region will get up to six degrees hotter by the end of this century. That will dramatically alter rainfall, with less falling, but in more violent storms.

The report warned: “Africa as a whole is one of the most vulnerable continents due to its high exposure and low adaptive capacity.” Critically, maize yields in the region are projected to drop by a third by 2050.

This will make Lesotho’s precious water all the more valuable.