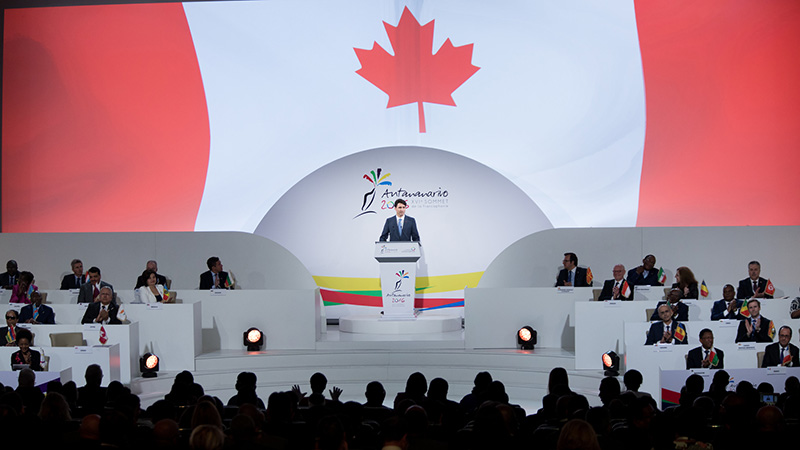 On Monday, Canada’s prime minister Justin Trudeau explained to a group of kids why slashing greenhouse gas emissions was the “smart and right” policy choice for governments.

On Tuesday, he was accused of sending conflicted messages on climate change after authorising construction of two pipelines for tar sands oil.

In the past year, the Trudeau administration has been one of the more vocal in calling for tougher global greenhouse gas cuts and joined a ‘high ambition’ group of countries backing climate action.

But green groups say Trudeau’s decision to back the pair of projects – which are valued at C$11.8 billion – runs counter to his claims that the world needs to move away from fossil fuels.

In a series of tweets on his official account the prime minister said pipelines would “protect the environment and grow the economy”, citing nearly 200 “binding conditions” on developers.

“A clear message has emerged through our government’s extensive consultations with Canadians: the economy and the environment go hand in hand,” read an accompanying statement.

One pipeline will run from the tar sands heartlands of Alberta to British Columbia; the second will see an existing 1,000km pipeline from Alberta to Manitoba replaced.

Oil extracted from tar sands is one of the most carbon-intensive fuel stocks on the planet, and causes widespread environmental damage during extraction and refining.

According to the Natural Resources Defense Council (NRDC), the pipelines mean Alberta’s tar sands industry will be able to ship an extra 1.1 million barrels of oil per day.

A third proposed project was rejected on the grounds it was not in the public interest and would see an increase in oil tankers navigating sensitive ecosystems.

Limits to shipments of oil along British Columbia’s north coast were also announced, with legislation due in early 2017.

Plans for a nationwide carbon price from 2018 and a promise to axe coal use by 2030 grabbed headlines, as did the province of Alberta’s landmark decision in 2015 to cap the emissions of its tar sands industry.

Still, the country is projected to miss its climate targets under the Paris Agreement: there the government pledged to cut emissions 30% on 2005 levels by 2030, but analysts at Climate Action Tracker say they are on track to rise 1-7%.

Under that agreement, signatory countries aim to reduce greenhouse gas emissions to net zero in the second half of the century and limit warming to “well below” 2C above pre industrialised levels.

The decision means Canada “in one fell swoop” will not meet its targets under the UN climate agreement says Josh Axelrod, an analyst with NRDC Canada.

“Today’s announcement gives that industry decades worth of growth potential, a fact that will ensure soaring Canadian emissions for the foreseeable future.

“Indeed, the annual lifecycle emissions from the oil carried by these two pipelines could exceed 271 million metric tons, the same as 57 million passenger vehicles.”

“There is no need for any additional pipeline capacity. Oil Change International recently released a report showing how the Canadian Association of Petroleum Producers is misleading Canadians on the need for new pipelines,” he added.

“Vancouver will continue to raise concerns about Kinder Morgan’s massive expansion that could bring seven times the number of oil tankers to our waters,” said the city’s mayor Gregor Robertson.

“I – along with the tens of thousands of residents, local First Nations, and other Metro Vancouver cities who told the federal government a resounding ‘no’ to this project.”