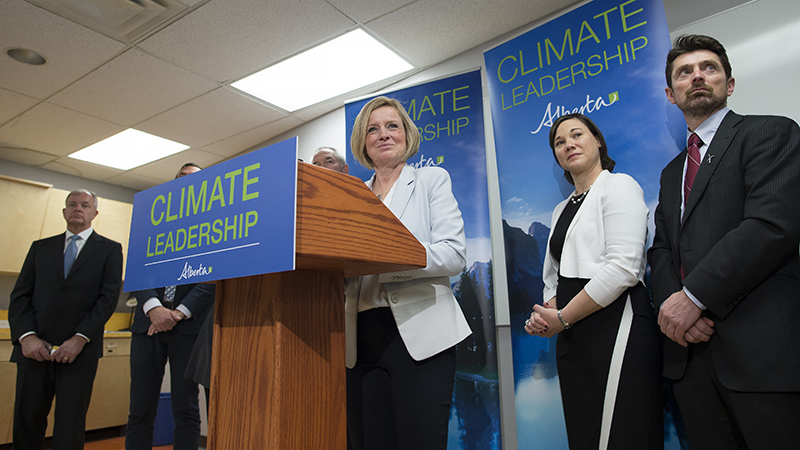 Alberta will cap the expansion of its notorious tar sands and levy an economy-wide carbon tax in a bid to counter years of inaction on climate change.

It marks a radical turn for the top-polluting Canadian province, long an obstacle to tougher national climate commitments as the source of the country’s fastest-growing emissions.

Premier Rachel Notley will limit annual production emissions of crude oil from tar sands to 100 million tons of carbon dioxide (MtCO2) from its current output of 70 MtCO2, as well as retire coal-fired plants without carbon capture technology by 2030.

“Our goal is to become one of the world’s most progressive and forward-looking energy producers,” Notley said at a conference in capital Edmonton on Sunday, the Washington Post reported. “We are turning the page on the mistaken policies of the past.”

Historic day in #Alberta #coal phaseout, 30% #cleanenergy, a price on #carbon. Tar sands fight not over, but momentum is building #abclimate

Notley’s proposal will rouse an anticipated meeting in Ottawa on Monday between newly-elected prime minister Justin Trudeau and provincial leaders to strike a game plan for a UN climate summit next week.

Canada has come under fire for lacklustre carbon-cutting plans which have spurred provinces like Ontario and Quebec to take the lead on deploying carbon taxes and clean power incentives.

Federal-provincial relations broke down during Stephen Harper’s nine-year tenure. A large Canadian delegation is slated to attend the Paris summit to signal the country’s desire to repair its tarnished reputation.

Trudeau is expected to resist calls to overhaul his predecessor’s Stephen Harper pledge before the summit, but could revise Canada’s “intended nationally determined contribution” and take steps on natiowide carbon pricing by March.

Alberta’s plan includes cuts to methane emissions and an expansion of renewable energy and gas-fired generation. Coal plants provide almost 40% of the province’s installed power capacity, according to Alberta Energy.

Environmentalists celebrated the announcement as a dramatic change of events, six months after the NDP party ended 44-years of Conservative rule which backed the unfettered exploitation of tar sands.

“Today we are making history, with Alberta taking its rightful place as a leader on the world stage,” said Ed Whittingham, executive director of the Pembina Institute, a think tank. “Premier Notley promised Albertans leadership on the issue of climate change and she and her government have delivered.”

The moves come as Alberta’s oil and gas industry haemorrhages hundreds of thousands jobs after a global collapse in energy prices slows drilling.

Tim McMillan, president of the Canadian Association of Petroleum Producers said “There are opportunities in there – as coal is phased out, natural gas has been identified as one of the major backfills. The changes to the carbon price and the cap that’s put on oil sands, the details are going to matter a lot and we’re keen to be at the table.”

“It enables Alberta to be a leader, not only in climate policy, but also in technology, innovation, collaborative solutions and energy development,” said Brian Ferguson, chief executive of oil sands producer Cenovus Energy Inc.

The province plans to have renewable account for one-third of power by 2030, the same year coal stations without carbon capture technology are set for a phase-out. Meanwhile, methane emissions will fall 45% by 2025 on 2014 levels, a goal in line with the United States.

Jennifer Morgan at the US think tank, WRI said the announcement sent a “clear and positive signal to the world shortly before the Paris climate summit.”

“This should boost confidence of Canada in the international negotiations.”