US president sets out vision for global cooperation in New York, as double threshold for bring the Paris Agreement into force edges closer 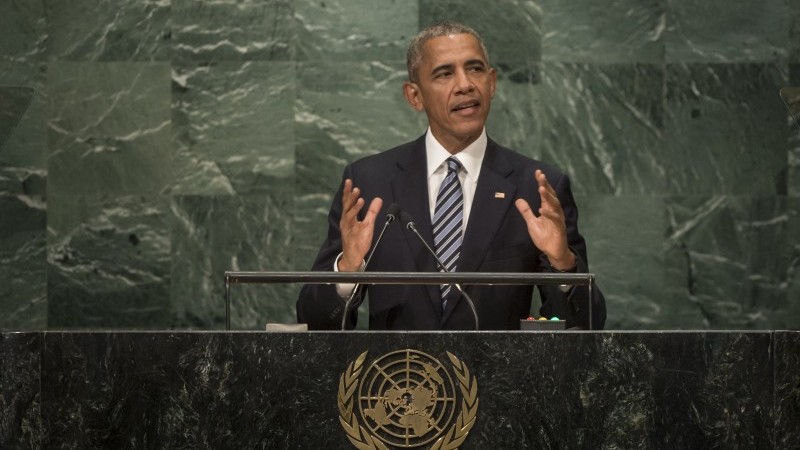 Barack Obama appealed for a scaling up of climate finance to reduce global inequality on Tuesday, in his last speech to the UN General Assembly as US president.

The UN-backed Green Climate Fund, which is disbursing US$10 billion of initial donations, “should only be the beginning”, he said, calling for investment in research to make clean technologies affordable.

In a wide-ranging 50-minute address, he mounted a defence of international cooperation, arguing that action on climate change was critical to close the gap between rich and poor countries and make the world safer.

“If we don’t act boldly, the bill that could come due will be mass migrations, and cities submerged and nations displaced, and food supplies decimated, and conflicts born of despair,” said Obama.

“The Paris Agreement gives us a framework to act, but only if we scale up our ambition. And there must be a sense of urgency about bringing the agreement into force, and helping poorer countries leapfrog destructive forms of energy.”

The race to ratify the pact is on, lent potency by the unspoken threat of climate-sceptic Donald Trump getting the most powerful job in the world.

Ukraine is the latest to file its documents, joining the US and China to take the total to 29 countries representing 40% of global emissions. Another 13 countries have completed their domestic processes and are set to formally join the deal at an event hosted by Ban Ki-moon on Wednesday.

Brazil is the biggest emitter of these, with newly appointed president Michel Temer affirming the country’s commitment in the face of political turmoil at home.

“Prosperity and well-being today should not impair the future of mankind. Economic growth should be socially balanced and environmentally friendly,” said Temer.

“As the world’s most biodiverse country and displaying one of the world’s cleanest energy matrices, Brazil is an environment powerhouse with an uncompromising commitment to the environment.”

Morocco, which will hold the next UN climate summit in Marrakesh, is also set to deposit its paperwork.

The next wave of ratifications is not expected to pass the double threshold for bringing the deal into force: 55 countries accounting for 55% of emissions. Still, analysts are increasingly confident, based on leaders’ statements, it will cross the line by the end of 2016.

Even the EU, which was lagging due to its convoluted internal processes, has been embarrassed into fast-tracking its plans. It could join the deal next month, although it remains unclear legally whether Brussels can speak for all 28 member states, or only the ones that have ratified domestically.

Prime minister Theresa May announced she was kicking off the process for the UK, which is expected to take a few weeks, while Germany is expected to follow a similar timeline.

“There is no time to lose,” said France president Francois Hollande, eager to turn from words to action as he prepares to hand over leadership of the UN climate talks.

“COP21 [in Paris] was the conference for decisions. COP22 [in Marrakesh] will be that of solutions. It is about the global solar alliance, the fight against desertification, protecting the oceans and putting a price on carbon.”