Amid bullish clean energy predictions and packed climate policy events, fears are growing over the impacts of a potential Donald Trump presidency 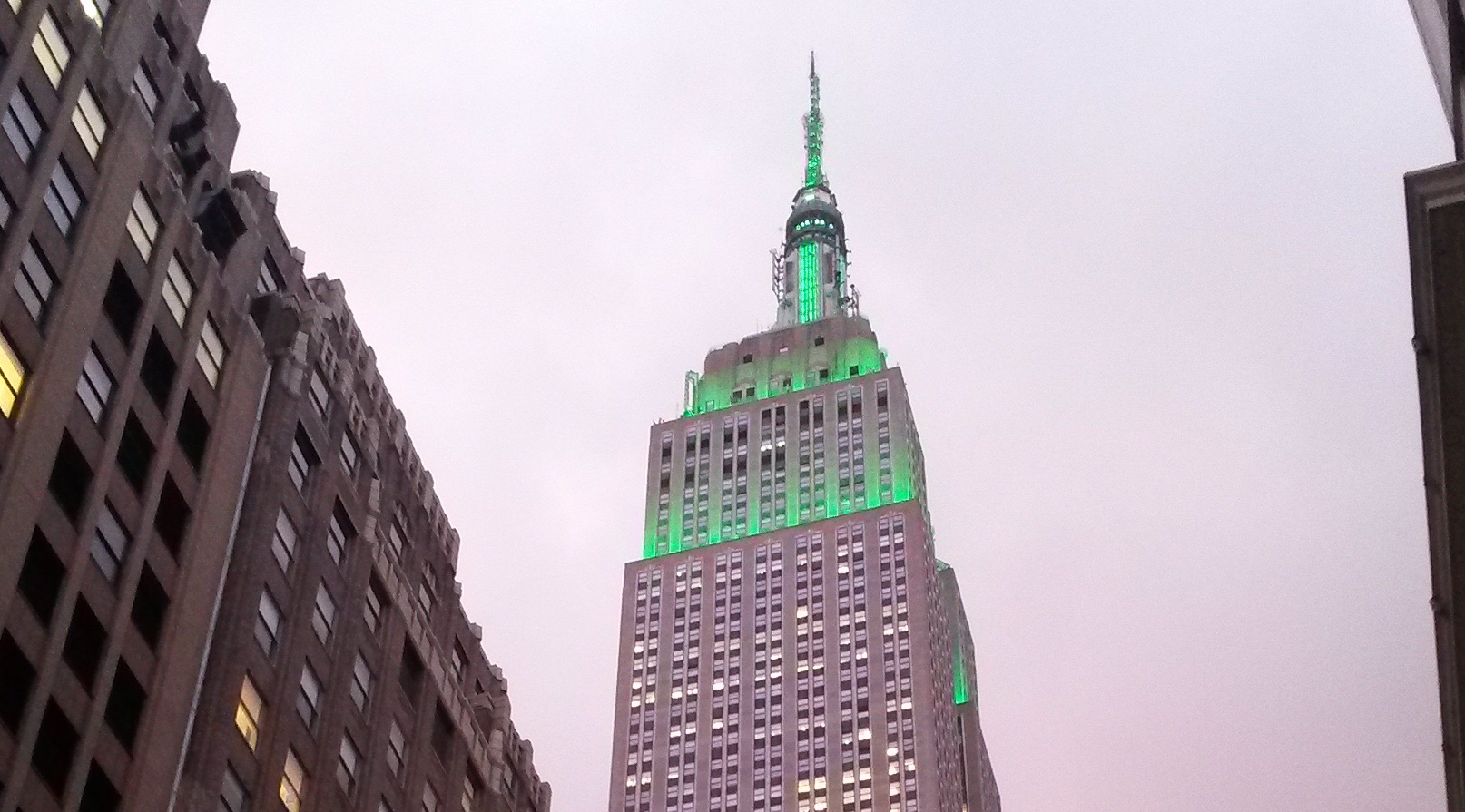 Bar the most colourful expletives, there are two words you’re unlikely to hear at Climate Week in New York: Donald Trump.

Inside the sophisticated cool of the New York Times building off 8th Avenue, business leaders and politicians addressing the CWNYC launch party oozed determination and optimism.

Perhaps that’s no surprise, given the event was boldly titled “America Means Business: US Leadership in a post-Paris World”.

But reading between the lines – and reading their comments a second time – there’s an unspoken fear of the momentum gained by the UN’s new Paris Agreement on climate change being Trumped.

“There is a robust political discussion going on in the US,” said energy secretary Ernest Moniz, his face betraying a smile as wide as his understatement. “There’s no substitute for committed leadership – that’s what makes government work together.

“I think it will be very costly for American business if we do not get clear signals and stability now,” he added, urging lawmakers in the US Congress to “step up” and support federal clean energy legislation.

Businesses and states are awaiting a “pivotal election” said Amy Davidson, head of Climate Group USA, to see if climate leadership “will continue into the next administration”.

“We are in the age of extremes,” said Philippe Couillard, premier of Quebec, a Canadian province which sources 99% of its electricity from hydropower and has linked with US states in a cross-border carbon trading scheme.

“I’m hearing some talk of opening more coal plants – it’s the opposite direction of what should be done,” he said, bemoaning the lack of “moderate” voices in the climate debate.

Hawkers touting “Dump Trump” and “Feel the Bern” Bernie Sanders badges in Times Square say their products are in high demand. This is, after all, a city that has not elected a Republican for president since 1924.

Mayor Bill de Blasio’s “One NYC” plan committed to slashing building emissions 80% by 2050 and pledged over US$300 million to flood-proof parts of lower Manhattan.

Public transport is cheap and cheerful while bike lanes seem well-populated by a Citibank-sponsored cycle-sharing scheme.

It is, perhaps, easy for visitors to forget New York is far from representative of the US’ 318 million residents.

Surveys by Yale and George Mason University through 2016 suggest global warming divides the US as few other issues can, even as temperatures recorded by NASA smash new records.

Trump’s gaudy towers dominate parts of this city, drenched today in thick, humid heat and the gentle hums of air conditioning units. Below their gaze are the iconic yellow taxis, whooping NYPD patrol cars and blacked out shiny Chevrolet SUVs ferrying ministers and their entourages to the UN General Assembly.

This fortnight is traditionally a celebration of multilateralism. For all its inadequacies and inability to secure peace in Syria, nearly 200 nations did sign off on the world’s first climate pact last year.

What we do know comes from the man himself. He would “cancel” the Paris climate agreement and end what Republicans call the “war on coal”. This week Politico reports Trump would name an oil executive as interior secretary if elected in November.

The fossil fuel subsidy reforms Congress can or is blocking (highlighted) https://t.co/r9GfZOvFQV pic.twitter.com/zraYnFfwAZ

That’s a worry for veteran climate operators like Rachel Kyte, who heads up the UN’s Sustainable Energy For All programme, charged with bringing light and power to millions in Africa and Asia.

“We need to pivot into how we get this done… how do we get to better place earlier than 2030… health and education depends on it,” she said.

US special envoy on climate change Jonathan Pershing, a diplomat prone to peppering speeches with a monsoon of statistics, offered a positive slant on global carbon cutting efforts.

“I’m struck by the shift in the investment world,” he said, quoting the oft-used $330 billion of investment in clean energy through 2015, and surge in issuance of green bonds.

“China has commitments that are quite startling,” he said. “India has a tax on coal… I had a meeting there a few weeks ago where they said they will continue and scale up.

Diplomat to the core, Pershing deftly dodged speculating on future of US climate commitments post-Barack Obama, who made the issue a priority in his second term.

“The US consumer will take a policy choice by way of purchasing… I see this as a trajectory that is coming,” he said.

At @ClimateWeekNYC, speaking about leadership & innovation that makes Alberta a great place to do business. #CWNYC pic.twitter.com/TjrTqj8I47

For all the pervading uncertainty, there were signs today of a continued and tangible shift towards a low carbon future.

Apple’s environment chief Lisa Jackson, a former US EPA head, announced the computer and phone giant was joining a global initiative to source 100% of its energy from renewables.

“We can’t just be a ripple in the pond; we have to bring others with us,” she said, adding Apple was lobbying countries where it has interests, such as Indonesia, Vietnam and India, to help it meet that goal.

Under fire in Europe for an unpaid $14.5 billion tax bill, the company has gained significant plaudits for its plans to deploy 4 gigawatts of clean energy by 2020.

Rachel Notley, premier of Alberta, Canada’s oil-sands heartland, appeared on a panel to push her province’s plan to cap emissions from the hydrocarbon sector.

“As long as the world needs oil, Alberta will have some of the world’s most carbon-competitive oil,” she said, telling Climate Home later the province’s move away from fossil fuels was inexorable.

Wall Street is also falling into line, driven by a desire by bank workers to clean up their image, said Andrew Plepler, a governance executive at Bank of America.

“Employees were not happy working at a financial institution in the last five to six years… if you want to attract the best people you better be serious [about the environment],” he said.

Critics say his bank is still a major funder of fossil fuels – notably backing the controversial Dakota Access Pipeline to the tune of $350 million according to the Food & Water Watch NGO.

That’s changing, argued Pepler, pointing to a new pledge to commit $125 billion to green finance by 2025. “What we are seeing is interest-driven,” he added.

US leadership on ice?

These signs of North American climate action are nowhere near enough admitted Moniz, who said he has a bet “we will have economy-wide legislation [on climate] on this by end of the decade”.

Odd weather has a part to play, he said. “Its sinking in that the pattern of extreme weather is something that has been predicted for decades. There is a strong move,” he said.

New Yorkers need little reminder of what extreme weather can do. The “L Train” line between Manhattan and Brooklyn, which carries 400,000 people a day, is being shut for repairs until 2019. Its tunnels were flooded in 2012 when Hurricane Sandy hit. The seawater corroding tracks and damaging tunnels to the extent that prolonged repairs are required.

Ten blocks east of the New York Times HQ, foreign ministers were discussing a broader set of repairs – focused on the world’s inability to tackle a worsening refugee crisis.

Conflict, violence and extreme weather are to blame for the world’s estimated 21.3 million refugees says UNICEF, which is campaigning for a tough response to help children cope with that it calls the “unprecedented level of human mobility the world is facing.”

Usually softly-spoken, Morocco’s environment minister Hakima El-Haite delivered a blistering retort to those who think climate change is close to being sorted, directly linking it to rising levels of migration.

“These are not virtual migrants – they are real. I’m wondering what will be the state of 2050… 250 million migrants? We will not be alive, but our children will be still there,” she said.

“Because of a lack of water, food security, floods, they have no way to survive in their own home. The Paris Agreement is a development agenda for peace and human rights.

“We need American leadership. We need solidarity and this is possible because human beings can move. This is what the value of the US shows us. Humans can be generous and find solutions for the most vulnerable.”

Read more on: US | Donald Trump | US election US