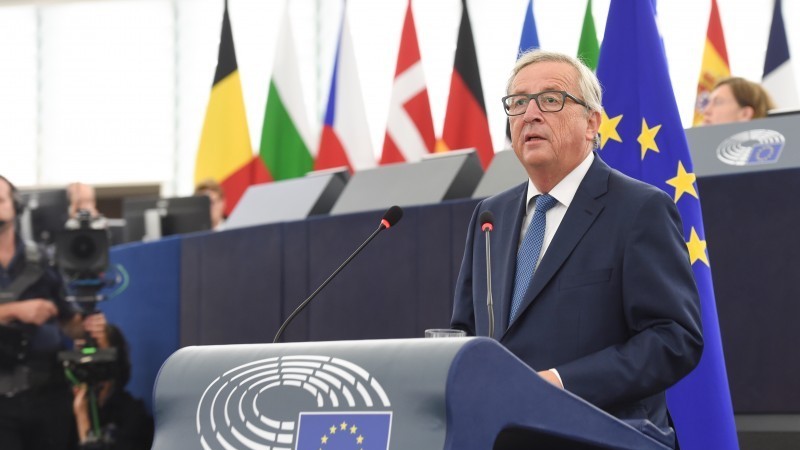 The EU’s failure to formally join the Paris climate deal it helped craft is becoming an embarrassment, as other major emitters forge ahead.

That was officially acknowledged by European Commission president Jean-Claude Juncker in his state of the union speech on Wednesday.

“We were climate change pioneers in Paris,” he said. “Dragging our feet on ratification affects our credibility and makes us look ridiculous.”

The US and China jointly submitted their paperwork earlier this month, followed by Brazil on Monday. UN secretary general Ban Ki-moon is encouraging more countries to do their bit at a special event in New York next Wednesday.

It looks increasingly likely that the deal will reach the double threshold to enter into force this year: 55 countries representing 55% of global greenhouse gas emissions.

Based on its progress to date, the EU will not be part of the vanguard. Hungary and France set an early example, but Poland is holding out for assurances it can continue building coal plants, while the UK – preoccupied with Brexit discussions – refuses to give a timeline.

Leaders of EU member states will be asked to endorse a fast-track ratification process this week, reported Bloomberg. That would allow Brussels, representing 12% of global emissions, to complete the formalities as soon as next month – without waiting for all 28 to complete their domestic processes.

The EU's ratification of the #ParisAgreement would demonstrate European solidarity and unity in challenging times. Let's seize the moment.

Lawmakers in the European Parliament’s environment committee have endorsed the Paris Agreement by 47 votes to one, paving the way for a plenary vote.

It is the views of national leaders at Friday’s Bratislava summit that will be critical. Diplomats say initial reaction to the idea of an accelerated process have been mixed.

The crunch point comes as the Commission promotes “climate diplomacy week” with a series of conferences, debates and exhibitions.

Climate advocates are piling the pressure on.

Green MEP Bas Eickhout told Climate Home: “As the self-claimed leader of climate change policies, an entry into force of Paris without the EU is a painful illustration of how outdated that claim is… EU needs to show action on climate change quickly if it wants to restore credibility.”

Manon Dufour, head of think-tank E3G’s Brussels office, said: “It is crystal clear to many in Brussels – and notably Donald Tusk and Miguel Arias Canete – that a late ratification would seriously be putting the EU’s reputation at risk.”

Former EU lead climate negotiator Maas Goote pointed out not all member states have ratified an extension to the Kyoto Protocol either, which covers ambition to 2020.

“Knowing how the EU often portrays itself as a climate champion, they have to ‘walk it like they talk it’ and thus should be in the first group of ratifiers,” he said. “Actions speak louder than words.