President Michel Temer is expected to formalise climate commitments next week, as critics warn of failure to tackle deforestation 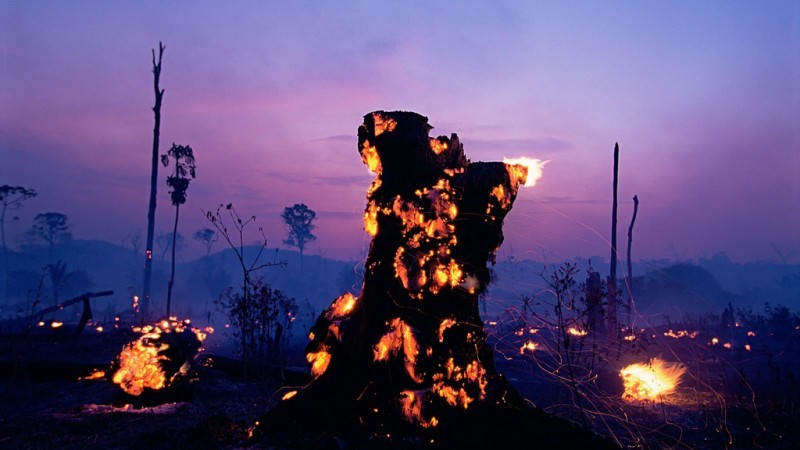 Brazil’s new president Michel Temer is expected to ratify the Paris Agreement on climate change next week, committing the country to a reduction of 37% of its greenhouse gas emissions by 2025, and of 43% by 2030.

But critics say that the commitment glosses over the government’s failure to address the legal and illegal forest clearance that is adding to global warming.

Brazil’s emissions are the seventh highest in the world, and they come mostly from land-use change − in other words, deforestation.

The government has promised that all illegal deforestation will be ended by 2030 – which, as critics point out, allows for it to continue for another 14 years − and sidesteps the thorny question of legally-permitted deforestation.

Scientists from the US space agency NASA and the University of California, Irvine, warn that lower rainfall in the Amazon basin because of the 2015-2016 El Niño phenomenon’s climate effects means that the region is now even drier than it was in 2005 and 2010, which were years of unprecedented drought.

It is heading for a very bad fire season, fed by dieback − a process in which the forest dries out, storing less carbon, producing less rainfall, and worsening global warming.

The dry season in Brazil now extends from July to November, and a record number of 53,000 forest fires – mostly in the Amazon region − had been detected by the beginning of this month.

The largest number of fires  − around 15,000 − were detected by Brazilian scientists, using satellite images, in the state of Mato Grosso, which contains part of the Amazon biome − a region sharing similar climate, animals and plants. Most of them had been started deliberately.

The result is a drastic change in the landscape. The state takes its name from the dense forest – mato grosso roughly translates from Portuguese as “thick bushes” – that once covered it. But large swaths are turning into savannah.

Environment journalist Sucena Shkrada Resk, who has just travelled to the region, described seeing a “gradual but accentuated process of savanna-isation”, which she blamed on monoculture practices, extensive cattle farming, illegal logging, and degradation caused by wildcat mining.

“In many places the soil is sandy,” she reported. “Few farmers worry about restoring degraded areas, and you even see hilltops cleared of vegetation. Official reserves and APPs [areas of permanent protection] are more and more fragilised.”

She described groups of cows seeking shade under a single remaining tree, while the ashes and soot from the fires cause breathing difficulties, forcing many people to seek help at the under-equipped health posts and hospitals.

“Few farmers worry about restoring degraded areas, and you even see hilltops cleared of vegetation”

Resk said the level of big rivers such as the Teles Pires and Juruena, and their tributaries, is well below normal levels.

One area of dense rainforest remains in the north of the state: the Xingu national park, one of Brazil’s largest indigenous territories, covering 12,000 square miles.

It was created in 1961 by the explorers and protection agents Orlando and Claudio Vilas Boas to save indigenous tribes threatened by the advance of Brazil’s road network, and it is home to 6,500 indigenous people from 16 different ethnic groups.

But the Xingu park is now entirely surrounded by big ranches and farms, which have cleared all the rainforest for their cattle and crops of soya and maize. The result is a noticeable change in temperature and rainfall within the park.

In a documentary called Where have all the swallows gone? − produced by two Brazilian environmental organisations, the Socioambiental Institute and the Catitu Institute – one of the Xingu residents says: “When the crickets begin to sing, we know that in three days’ time it will begin to rain. Then it is the time to plant sweet potatoes, squash, peanuts, yams, chili peppers.

“But they are no longer singing. The heat has dried up their eggs.”

The film shows how climate change induced by forest clearing is affecting life in the Xingu park. The swallows, which used to fly in bands to herald the rains, have also disappeared.

Fires that once were used in a controlled way for clearing land now spread very easily, affecting big areas of the park. The intense heat is killing fruit and food crops, and the local people fear that future generations will have to depend on white people’s food.

Marina Silva, a former environment minister, says: “They are besieged by the model of economic production that Brazil adopts and gives incentives to.”

Other factors driving deforestation are the revised Forest Code of 2012, which gave amnesty to farmers who had illegally cleared land. It also reduced protected areas, and weakened environmental management and control in the state of Amazonas, which was once largely untouched by fires and deforestation but is now one of the states most affected.

So while Brazil is officially signing up to the Paris Agreement to reduce emissions overall, the reality is that the Amazon − the source of most of the deforestation-linked emissions − is at risk as never before. And at the same time, emissions from energy, agriculture and industry continue to rise.