Farmers need to give up the plough to protect UK food security in the face of climate change, warn government advisers 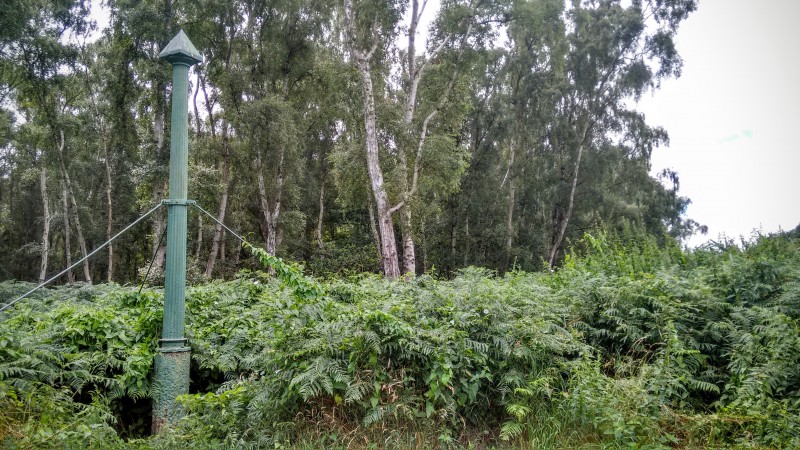 It could be the wood between worlds in Narnia, the fantasy land of CS Lewis’s children’s classic.

The four metre-high iron post is not a street lamp, though, it is a measuring stick. Planted in 1852 by a forward-thinking engineer, its tip marks the height of Holme Fen’s rich peat topsoil at the time.

Through peat drainage and intensive farming, East Anglia – the breadbasket of Britain – has lost three quarters of its topsoil in the past 150 years.

“That disappearance is being accelerated by climate change,” warned Lord Krebs of the Committee on Climate Change last month at the launch of a national risk assessment.

“If we carry on as we are at the moment, it will all have gone within a generation and we simply won’t be able to grow the food we grow now in the future.”

The UK hasn’t been self-sufficient in food since, well, around the time the Holme Fen post was planted in the ground. If the nation only ate British crops and livestock, it would run out on 9 August, the National Farmers Union highlighted this week.

At a time harvests worldwide are under pressure from a booming population and shifting weather patterns, the prospect of that capacity shrinking further is alarming.

He enthuses about a shiny new bit of kit. It could be part of the solution.

He has got a grant – from EU and UK government funding – to buy a Weaving “no-till drill”. “Other brands are available,” he jokes in the manner of a BBC presenter. (For non-Brits: It’s a state-owned broadcaster and not allowed to advertise products.)

It is called a drill, but it looks more like a row of pizza cutters; sharp discs angled at 25 degrees. These slice through the soil, lifting it up just enough to fire a seed in at the right depth.

Bradshaw rattles through a PowerPoint presentation on farming machines of the past few decades and how thinking has evolved.

Ceris Jones, climate change expert at the NFU, is along for the visit. She cuts through the jargon: “Traditionally, people would have turned lots of soil over. With no tillage or minimum tillage, you disturb the soil less.” 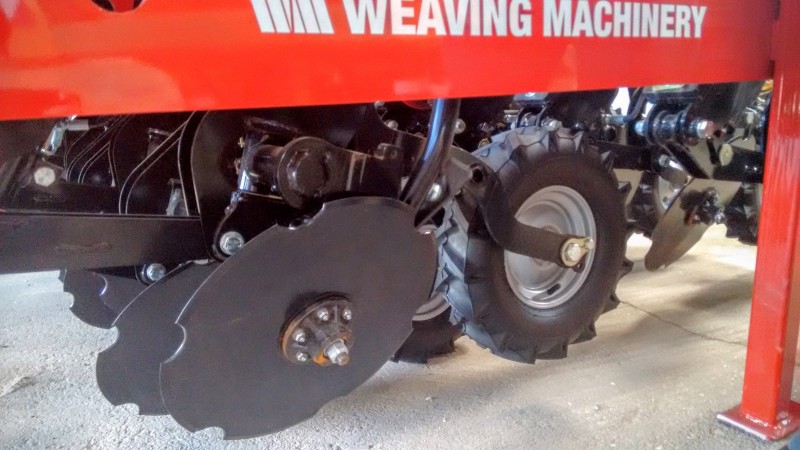 There is no going back to the mid-nineteenth century. The intervention that set off four metres of soil loss is not readily reversed.

It started when local landowners decided to drain Whittlesey Mere to free up land for cultivation. More than half the shrinkage occurred in the first 20 years, as the peat dried out.

“What the drainage does is to remove the water, so that accounts for quite a lot of the subsidence,” explains Iain Brown, researcher at the Stockholm Environment Institute in York.

That wasn’t a new idea – people had been reclaiming parts of the boggy fen since the late middle ages. If they hadn’t, farms like Bradshaw’s wouldn’t exist in the first place.

Holme Fen is now a nature reserve. Dragonflies dance along the marshy ditches on a summer Wednesday. It is quiet but for the wood pigeons and dull roar of intercity trains passing nearby.

At 2.75 metres below sea level, the lowest point in Great Britain, it still depends on continuous pumping to manage the water table.

Climate change comes into it because carbon in the dried peat oxidises when it is exposed to the air.

That happens faster in warmer conditions – and in turn releases carbon dioxide that contributes to global warming.

It is an important feedback loop that needs more research, argues a recent paper in the journal Nature Climate Change.

“In the soil, we don’t know how things are working because, if you like, it’s as clear as mud,” says lead author Mark Bradford, of Yale University.

“Often we can’t measure what we’re trying to measure because we can’t see the organisms. You have millions of individual microbes – from thousands of cryptic species – in just a handful of soil.”

Farming practices make a difference. Ploughing exposes more soil to be oxidised, washed away by rain or whipped up by the wind.

The “fen blow”, a local term for a dust storm, used to be a regular occurrence but has got less frequent, says Bradshaw – a sign that techniques are changing.

“What we have to do is adopt a management practice that enhances and protects our soils. Some of us are on the case, but we need everyone to be on the case.”

Bradshaw hasn’t used his no-till drill yet, but is convinced of the benefits. A neighbour who has been using similar techniques for 15 years saw the soil’s organic content triple, he says – and was able to cut down on potash and phosphate use.

It also makes for looser soil that better absorbs water, a useful property as rainfall is set to become more variable.

As a condition of the grant, Bradshaw is talking about it to other farmers. The main barrier for most is financial – his Weaving drill cost £34,000 (US$44,000).

“Getting people to take on no tillage is a difficult practical thing to do because of the expense. It is not just a mindset.” 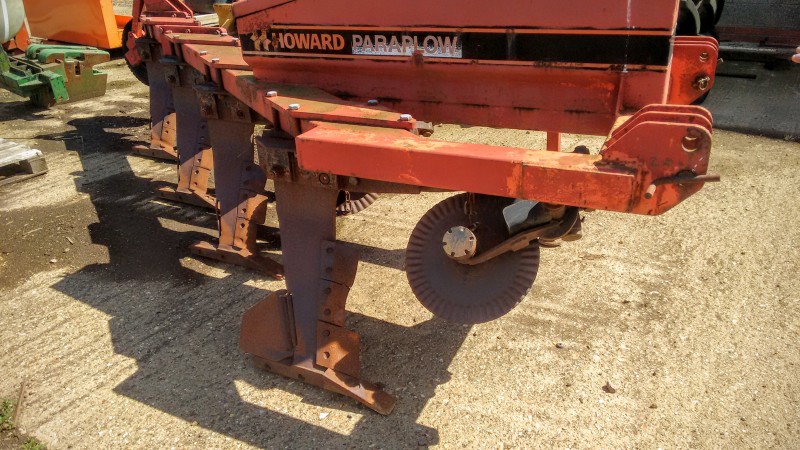 A relic of an early no-till experiment (Pic: Megan Darby)

The idea has been gaining traction since the late 1970s. In the yard, Bradshaw has a rusting tool from that era, which he would like to refurbish if he can find the spare parts.

It is from an earlier experiment that didn’t work out. Since then, understanding of techniques like using “cover crops” to stabilise the soil over winter has improved.

No-till agriculture is generally associated with more herbicide use, setting it at odds with the organic movement – although there are ongoing efforts to reconcile the two.

The EU is dithering over whether to ban glyphosate over disputed evidence of toxic effects. The formula has a licence to the end of 2017.

Peter Melchett, organic farmer and policy adviser at the Soil Association, says it is unnecessary. At his farm in Norfolk, he does no tilling for three years out of a six-year rotation.

“There are lots of organic farmers who use minimum till without using Roundup,” he tells Climate Home. 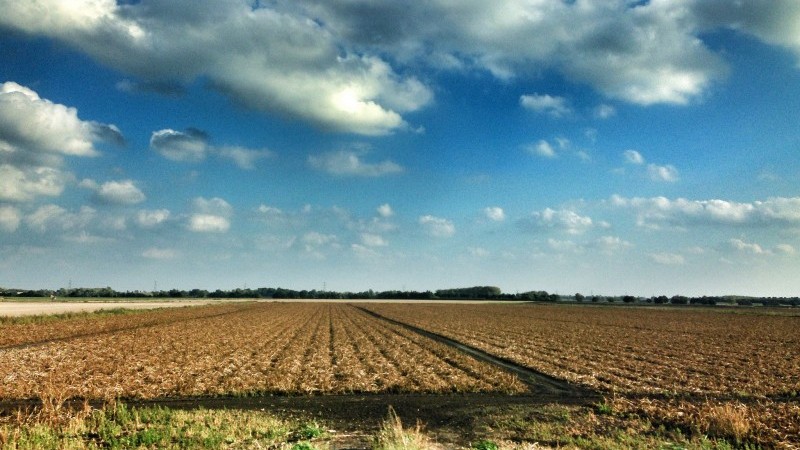 The fens produce much of Britain’s cereal and vegetables (Pic: Flickr/Alan Parkinson)

Brown, lead contributor to the natural environment section of the Committee on Climate Change report, won’t take a stance on glyphosate.

But no-till is “definitely the way to do it”, he says, calling for policies to boost uptake. A 2015 government survey found reduced tillage systems were in use for around 40% of cultivated land and no-till for 4%.

“There is quite a range of reactions,” says Brown. “Some farmers can see it benefits them in the long term and others are less progressive.

“They are under pressure to get a harvest in a particular year and in some cases go out and work the land even when the soil is not in the best condition.”

The EU Common Agricultural Policy is the dominant driver. It has shifted from a focus on production to more incentives for environmental protection, although Brown would like to see it go further.

And of course, Brexit throws everything up in the air. “There is a bit of a vacuum there to establish the policy position,” says Brown.

Study: Food production could increase 40% with better water use

With diverse supply chains and relatively strong purchasing power, Britain may not need to produce all its own food. But soil loss is a worldwide problem.

The UN desertification body says 168 countries are affected by land degradation, wiping out an area half the size of Britain every year. Some nations will lose up to 10% of agricultural GDP, according to its economic analysis.

More droughts, floods and intense storms brought by global warming will only up the pressure on farmland, as will the rise in mouths to feed.

If British farmers squander soil carbon just as climate pressures are intensifying, that could weaken food security. If they enrich the soil, they can make this island nation stand a little prouder.