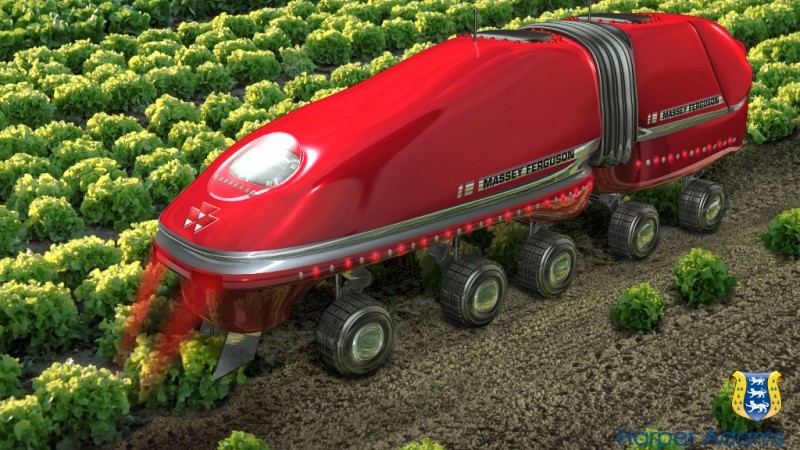 Mock-up of a robot selectively harvesting lettuces only when they are big enough (Pic: AGCO)

Big fields, big tractors, big chemicals: farming developments over the past few decades have been all about economies of scale.

That approach is reaching its limits, farmers heard at a Royal Society event on Friday.

The future of agriculture is all about ultra-lightweight robots, satellite data and laser weed killers – and it could be far more energy efficient.

Giant tractors compact the earth, squeezing out spaces for air and water, increasing flood risk and reducing productivity. The traditional solution is to plough the field.

“The best thing to do with soil is to leave it alone,” says Blackmore: “Let the worms do their work.”

At the National Centre for Precision Farming, his research team is developing robot prototypes that exert far less pressure.

Instead of spraying entire fields with herbicide, drones can apply microdots directly onto the weed, reducing the volume needed by 99.99%. A 5W laser can zap unwanted plants.

When it comes to harvest, robots could select only the ripe crops and avoid waste. At present, 20-60% of harvested crops are thrown away because they don’t meet supermarket standards.

These technologies are some way off widespread commercial use, but Blackmore is convinced that environmental and competitive pressures will drive demand.

“Tractor manufacturers aren’t interested [in robotics] because it’s too disruptive. There will be agricultural robots, but whether they will be in two years’ time or twenty years’ time we will have to wait and see.”

Report: No hiding for polluters as carbon-tracking satellite numbers rise

Meanwhile, increasingly high resolution satellite data is already helping farmers to be more selective about where they spray.

Photos from space show how moist and nutrient-rich different parts of a field are, explained Barbara Ryan, director of the Geneva-based Group on Earth Observations.

“With those images, farmers are now able to differentiate their applications of pesticides or nutrients. If you can use lower quantities, you are spending less money and get the same kind of return.”

Responsible for around 11% of global greenhouse gas emissions in 2012, agriculture takes a back seat to energy in the climate debate.

Since governments signed up to ambitious international goals to curb global warming in Paris, all sectors will come under more scrutiny.

As the number of mouths to feed grows, sustainable intensification is the name of the game.

Blackmore has not calculated the potential emissions savings from his automated vision of the future, but the idea is to slash waste.

“Crop production has to become a lot more flexible and efficient,” he said.