The world’s governments have committed to moving away from fossil fuels, but rupturing the oil, gas and coal industry will affect the lives of millions 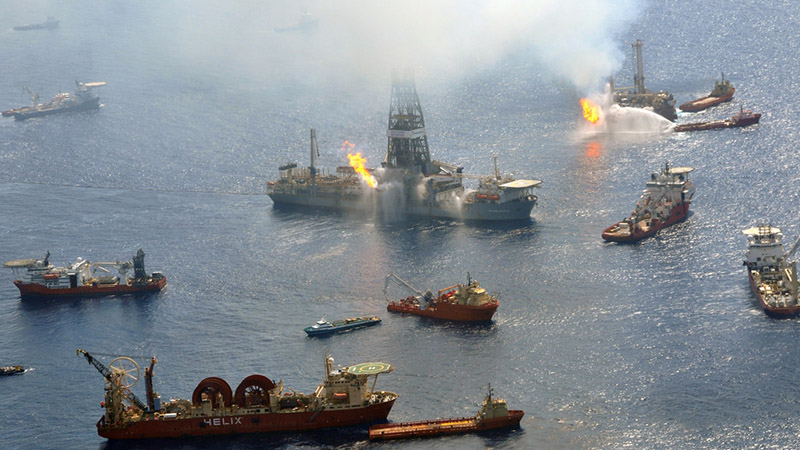 BP vessels burn off gases over the Deepwater Horizon Well in the Gulf of Mexico, 6 weeks after the rig exploded (Pic: DVIDSHUB/Flickr)

When BP’s Deepwater Horizon rig exploded in the Gulf of Mexico on 20 April 2010, few noticed the burning hulk was registered in the Marshall Islands.

But in 2015, when Shell sent the Polar Pioneer rig to drill for oil and gas in the Arctic, activists noticed it too flew under the flag of the tiny Pacific nation.

According to Greenpeace, 183 ships and rigs linked to the oil industry are registered in Majuro. In March its entire fleet passed the 131 million gross tonnes mark.

Charles McHardy, an advisor to the RMI’s shipping registry, said it was “very active” in the offshore and energy sector, in an interview with specialist site Hellenic Shipping News.

The relationship between a low-lying island state acutely vulnerable to rising sea levels linked to climate change and the global fossil fuel industry is curious.

It underlines the complexity of making a transition to greener forms of energy, a factor alluded to by Farhana Yamin, climate advisor to the Marshall Islands presidency.

“Three quarters of the world’s [shipping] fleet is in developing countries – they face climate impacts and have a struggle extracting themselves from the fossil fuel economy,” she said.

Like the Marshalls, Panama and Liberia are also major shipping registries and acutely vulnerable to climate change, observed Yamin, speaking in Paris at an event hosted by the IDDRI think tank.

The Marshalls and others need a tough global response to climate change, but an unintended consequence could be the end of Majuro’s significant income from flagging oil rigs.

Climate change, it would appear, is not just about the weather.

The venue for the discussion was the old Paris stock exchange, known locally as the Bourse. An imposing, neoclassical temple to capitalism, supported by vast stone columns, it closed in 1987.

Hints of its past remain, notably a huge blackboard where the final round of share prices are marked in chalk next to small metal signs carrying company names.

Some of those trading in 1987 and listed on the board exist today: Exxon, IBM, Hitachi and Siemens. Others, like Perrier, Volvo and Esso, have been consumed in mergers or takeovers.

It’s evidence, if we need it, that business is constantly evolving. Old companies that fail to move with the times fail and are devoured to be replaced by new, innovative enterprises.

The fear voiced by speakers in the Bourse was that time is running out to ensure there is what many term a “just transition” to a greener, less polluting global economy.

And that governments in their haste to develop tougher climate laws and invest in cleaner forms of energy may leave villages, towns, cities and countries locked in an older paradigm behind.

Because if governments meet the challenge laid out by the Paris Agreement on climate change, vast swathes of industry and millions of jobs wedded to high carbon energy could be history.

“The scale, depth and pace is unprecedented in human history if we are going to transform the way production and consumption happens,” said Alison Tate from the International Trade Union Confederation (ITUC).

“What we are talking about is a massive industrial transformation. We have major social changes.”

Poland’s pain: The battle to wean Warsaw off coal

You don’t have to look far to find communities already suffering as a result of globalisation and a desire by governments to cut pollution and greenhouse gas emissions.

As birthplace of the industrial revolution, the British countryside was ruptured by factories, smokestacks and furnaces burning coal and producing iron, steel and other core materials.

Roll on 150 years and most of those energy-intensive factories have closed, relieving cities of the pall of smog that once covered them but leaving a legacy of unemployment, anger and hopelessness.

As Climate Home’s recent mini-series revealed, employees of Port Talbot’s vast steelworks and Middlesbrough’s chemical and gases heartlands feel they are being written into history.

It’s a sentiment echoed across Europe, not least in Poland, where governments of all shades have been reluctant to shift their economy away from coal, and are now reaping the dividends.

A global slump in coal prices has had a savage effect on the industry, which employs 90,000 – down from half a million a decade ago.

“It means a lot of stress for the average worker… you must run in order to stay in the same place – in every sector – because everyone is chasing,” said Maciej Bukowski, head of the think tank Wise Europe and sometime advisor to Polish officials.

“For politicians it’s very hard to say we have been running for 25 years. Security is very important and coal is perceived as a source of security. We have social problems, and we don’t want another change.”

The responsibility of countries to deliver a ‘just transition’ is inscribed in the 2015 Paris Agreement preamble (Pic: UNFCCC)

In many ways, Poland is lucky. As a member of the EU it is sent billions from Brussels every year to help it cope with tougher – greener – laws and rebalance its economy.

Unemployment in its coal heartlands is high, but there are some retraining schemes available, said Bukowski.

For poorer parts of the world, that safety net is not available. Ecuador has long tried to convince richer nations to give it money in return for a promise not to extract oil from the Amazon.

The deal was simple. For US$3.6 billion president Rafael Correa promised Quito would keep oil worth $7.2 billion in the ground, and save the biodiverse Yasuni national park from exploitation.

Popular with the public, few foreign donors bought the concept. Papers from Wikileaks reveal the US thought it was a con. Last year, Ecuador ditched the idea and started drilling.

“How can we deepen the economy without deepening the extractive model?” asked Maria Fernanda Espinosa, Ecuador’s ambassador to the UN. She offered no answer, just blame for the West.

If Ecuador’s pitch was deemed ill-conceived, other policies aimed at helping poorer countries invest in clean energy and make the transition have also met with opposition.

Delegates at the 2009 Copenhagen climate summit were addressed by a “very small” Indian woman in a bright sari, speaking in her native Marathi language.

Baby Mohite’s job was picking up waste from the dusty streets of Pune, and selling recyclable bottles or tins to scrap merchants. A UN plan to incentivise waste incinerators threatened her future.

“What would I do? Where would my children go? How would they go to school? You are taking away my livelihood,” she said, in quotes related by the book Power in a Warming World.

The UN plan, known as the Clean Development Mechanism, was part of a billion-dollar scheme to develop a global carbon market to help slash emissions in a cost-effective way.

On a macro level it makes sense. But from Baby Mohite’s perspective, it was a direct assault on her future. Forget future climate impacts, next week she would be out of work.

Manage the transition poorly and thousands in the developed and developing world will suffer, said the ITUC’s Tate.

“We know change is coming but it will be radical and painful. This is about dignity. We don’t want to bargain over redundancy,” she said.

“When we look at Bangladesh, it’s not just the physical movement of people as a threat but also what kind of work and systems we are imagining for the future.”

For politicians already under fire for what many perceive is an increasingly unjust world, the prospect of a compulsory and radical swerve away from fossil fuels can seem scary.

Questions persist. Should India, where 300 million lack access to grid power, rule out high-carbon coal as an energy option?

Will oil-rich Saudi Arabia really be able to diversify its economy away from fossils while maintaining social cohesion? On the flip side, with temperatures projected to rocket in the Middle East, what if they don’t?

“Inequalities and divergences are a raising trend within our societies,” said Enrico Letta, Italy prime minister from 2013-2014. “There are big discussions about the winners and losers of globalisation.

“Look at the rhetoric of some leaders in France, the States – Le Pen and Trump to be clear – it’s based on losers and winners of globalisation, and saying to losers I will protect you and Europe is not protecting you.”

Few speaking in Paris had an obvious answer to ensuring a “just transition”. All accepted the urgent need to cut emissions, and understood this means jobs will be lost and created – at the last count 7.7 million were employed in the renewables sector worldwide.

The landing will be cushioned in richer nations. In the developing world, the combination of oncoming climate impacts and a fast-changing global economy may appear insurmountable.

Governments, argue Michael Zammit Cutajar, ex UN climate chief and Teresa Ribera, head of the IDDRI think tank, must anticipate regions that will be hit hardest and help them adapt.

“Support mechanisms to address potential unemployment and transition processes in affected regions have to be prepared,” they write in a column for Climate Home.

“Building a new project for the future of these regions and reinvesting in it is a huge and top priority challenge for governments.”

Global cooperation will be essential, said Yamin, who suggested the creation of an 100-strong “high ambition coalition” at the 2015 Paris talks heralded a new era in multilateral relations.

“We got to the point where we saw climate change not just as a burden sharing but also offering solutions… that means there’s greater willingness to look at the challenges each country faces.”

But, she added ominously: “I don’t think we have a handle of a post oil, coal and gas world.”