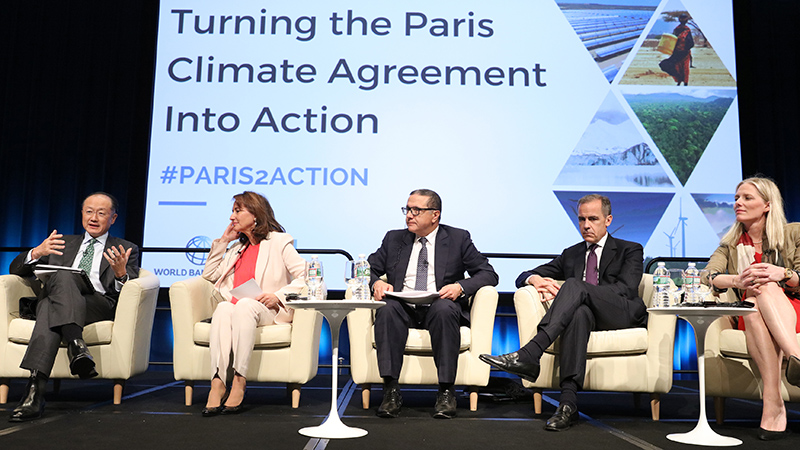 Waiting for the Paris Agreement to solve climate change is not an option, the heads of the Bank of England and World Bank told finance leaders in Washington on Thursday.

Speaking on the sidelines of the IMF/World Bank Spring meeting, Mark Carney and Jim Kim painted a bleak picture of the level of global climate risk awareness.

Only a third of the world’s top 1000 companies had disclosed their exposure to extreme weather or carbon intensive assets that will likely be closed under tougher climate laws, said Carney.

“The biggest risk is there is an abrupt adjustment that comes late because the government are late to take action,” he said.

“It could come late because there’s not the information out there creditors and banks need to make the adjustment.”

Kim, who runs the world’s top lender to developing countries, said governments were still wedded to high-carbon projects that would lock in greenhouse gas emissions till 2050 and beyond.

“The thing I worry about the most is the window is closing and we have to make some decisions very quickly,” he said.

“Once countries put 40 gigawatts of coal in that’s a 50-year investment. We are not yet having an urgent conversation.”

One solution is greater transparency, said Carney, who established a Financial Stability Board and G20 initiative to encourage businesses to be open with the public over their low carbon strategies.

“We need the right information published by all companies,” he said. Carney is to discuss EU-wide proposals to stress test financial businesses at a meeting in Amsterdam on 22-23 April, Reuters reported on Friday.

A slew of studies in the past 12 months have urged investors to take greater care over their stocks and ensure funds are not dominated by oil, gas and coal holdings.

“Our portfolio optimisation model currently recommends a reallocation of 30% of the holdings of a typical portfolio in oil and coal producers,” reads an April briefing from Impax Asset management.

That builds on a much-cited June 2015 report from consultancy Mercer, which warned average returns from the coal sector could fall 18-74% by 2050.

Kim urged stronger partnerships between governments, development banks and the private sector as a means to raising the trillions needed to build greener infrastructure.

A 2009 promise from wealthy nations to deliver $100 billion of climate funds a year by 2020 is “just not going to happen given the current situation”, he said.

Instead, countries should focus on using what grant-based aid there is to leverage multilateral development banks and set up some private deals.

“Every new deal will stimulate the market more,” he said. Tapping into the $100 trillion of fixed income assets in the hands of institutional investors like pension funds was critical, added Carney.

Earlier on Thursday finance ministers from countries vulnerable to the impacts of climate change said global finance flows had to be redirected to ensure a goal of limiting warming to 1.5C is met.

“We see the financial system as a weapon to fight climate change with tremendous potential,” said Cesar Purisima, Secretary of Finance of the Philippines and chair of the V20 group.

“So we are working hard to be pioneers in concrete and innovative economic and fiscal responses to climate change.”

In a statement, the 40-strong group, which draws members from Africa, Asia, the Caribbean, Latin America and the Pacific, said it was pushing ahead with its own climate finance plans.

One option discussed was a financial transaction tax to raise funds, while countries also agreed to deliver carbon pricing regimes by 2025 and embed climate costs in public accounts.

The group said it would explore a “risk pooling mechanism” to help members affected by extreme weather events, which are projected to increase as the planet warms.

“The world needs ambitious action by all countries if we are to decarbonise globally and keep the window open for the 1.5C limit needed by vulnerable countries like mine to survive,” said John Silk, Marshall Islands foreign minister.