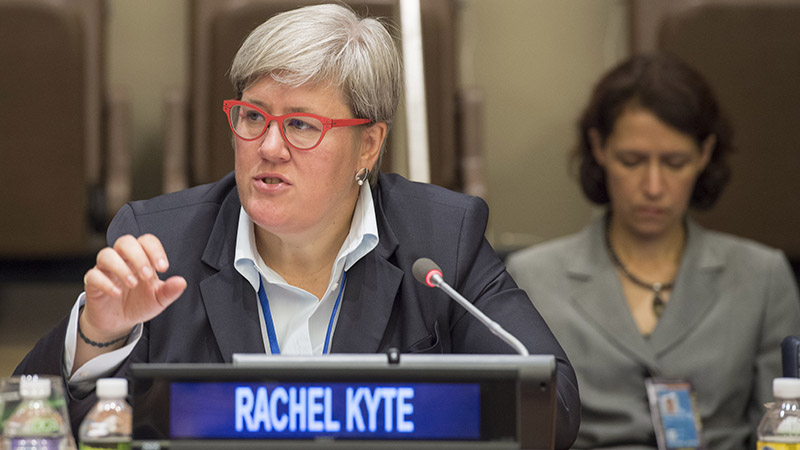 Rachel Kyte, Special Representative of the Secretary-General for Sustainable Energy for All (Pic: UN Photos)

Investors should consider how an aspirational 1.5C limit on global warming affects their portfolios, a top UN envoy said on Monday.

Shareholders are already pressing fossil fuel majors to recognise the risk greenhouse gas emissions curbs could dampen demand for their products. To date, most analysis has focused on a 2C threshold.

Rachel Kyte, CEO of Sustainable Energy for All, urged financiers to also factor in the tougher goal agreed at December’s Paris climate summit.

“If you are a long term investor,” she said, “I would want to be playing with what the scenarios look like for 1.5C, 2C and the differences therein, because it is not just a minor tweak of the curve.”

Pressure is mounting on fund managers and institutional investors to account for the impact of incoming climate legislation. A recent briefing note from Impax Asset Management warned the prices of energy stocks “do not account” for government intervention.

Kyte’s remarks at an event in London came as government representatives met 4,000 miles away in Nairobi to consider the science of the 1.5C threshold.

The Paris Agreement called on the Intergovernmental Panel on Climate Change (IPCC) to produce a special report on the subject by 2018; a challenge it is expected to accept.

The scope of that report is sensitive. Research into the impacts of 1.5C warming will fuel claims from vulnerable populations for damages from polluters. And there is limited evidence on the feasibility of curbing emissions fast enough to stay within that safety threshold.

UN chief climate diplomat Christiana Figueres, on the same platform as Kyte, acknowledged the shortage of peer-reviewed literature. She urged scientists to fill the gap.

“Do we know today how we would get to 1.5C? No. It is a moonshot. It is a clarion call to everybody,” Figueres said.

Average global temperatures have already risen by 1C since pre-industrial times. National pledges towards the Paris pact put the world on a 3-4C pathway – albeit with a plan to ratchet up commitments every five years.

He is not alone. A number of leading scientists are questioning whether 1.5C is the most helpful focus for study.

In a commentary for Nature Geoscience last week, Oliver Geden of the German Institute for International and Security Affairs called for a more “actionable” target.

Research should prioritise moving to net zero emissions, he argued – a target enshrined in the Paris pact for the second half of the century.

“2C has worked well as a focal point for the climate policy discourse, but not for the action,” he said. “It’s time to change the perspective. If we want to induce human action we will have to target human activity.”

That would require region-specific data – something certain governments had proved reluctant to include in previous assessment cycles.

“We have these kind of mechanised integrated assessment models, which can inform us about potential pathways,” he told Climate Home.

“One of the aspects that is very interesting would be to see how they are actually going to be achieved in the real world. I am not sure whether this is actually feasible to do that within the IPCC.”

To get to 1.5C or 2C, models tend to assume the introduction of carbon pricing worldwide, which has been slow to materialise.

As power plants and factories continue to churn out CO2, it looks like increasing levels of negative emissions will be needed to rebalance the atmosphere. That involves large scale investment in carbon capture and storage, which again has not been forthcoming.

Models that do not manage to output a 2C scenario are less likely to get published, according to Glen Peters of Norway’s CICERO.

“I think it would be better to look at what is feasible and how does that add up,” he told Climate Home. “Maybe the best a model would get is 2C. This will give us a much better understanding of where we are able to go.”

There is little point in producing more hypothetical emissions pathways, he said. Instead, a 1.5C special report should focus on unblocking political barriers.