Report aims to build confidence in funding for poor countries ahead of Paris summit, but analysts say challenges remain

Meenakshi Dewan, age 20 is one of 4 women from the village of Tinginapu, Orissa, who has been trained in solar engineering by The Orissa Tribal Empowerment and Livelihoods Programme, funded by the UK (Pic: Dfid/Flickr)

The amount of funding to help poor countries green their economies and cope with climate-related weather events is rising, says a new study.

According to the Paris-based Organisation of Economic Cooperation and Development (OECD), climate finance flows increased from US$52.2 billion in 2013 to $61.8 billion in 2014.

There has been “significant progress” towards a 2009 promise from developed countries to deliver $100 billion a year in climate finance by 2020, it said.

And it determined funds from rich countries like the US, UK, Germany and France had risen since a 2011-12 analysis.

Leaders in London, Paris and Berlin have already announced they are expanding their climate finance pots up to 2020, a move expected to be followed by others at the World Bank’s annual meet that starts this week.

“The positive signal is that climate finance flows are on an upward trajectory,” said Athena Ballesteros, an influential voice on climate finance with the DC-based World Resources Institute. 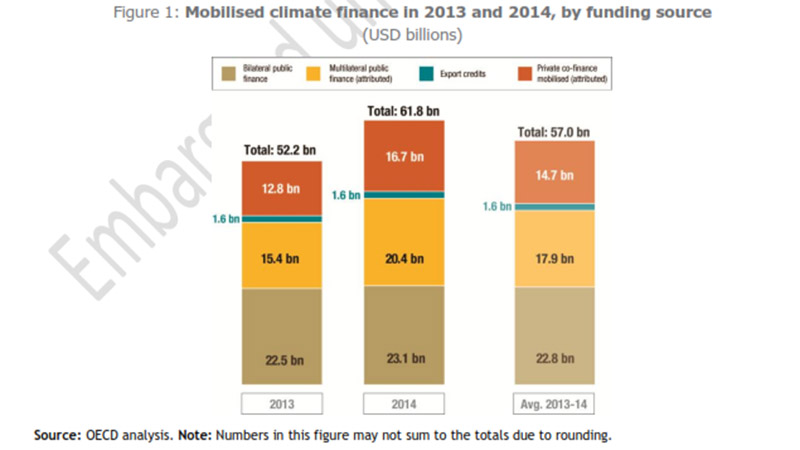 It’s a potentially game-changing status check. Climate finance is a critical part of plans for a global greenhouse gas slashing deal, set to be signed off in Paris this December.

A raft of long-term climate plans submitted by developing countries to the UN ahead of Paris ask for trillions of dollars in support.

They say that previous calls for funds have been largely ignored by rich governments – who are dodging the bill for a problem caused by their carbon-intensive growth last century.

A previous estimate of climate finance flows produced by the UN last year offered a range of $40-175 billion, in a study packed with caveats and thin on details.

This effort is more specific.

It draws on figures from multilateral development banks (MDBs), national climate funds and private sector cash leveraged as a result, although the authors say “data challenges and constraints” mean the overall picture is still blurred.

Simon Buckle, head of climate change at the OECD, told a press call it was “not a perfect estimate”, but argued it did offer more clarity to governments on what is on offer.

Timmons Roberts, a professor at Brown University, agreed. “There is more complete and up-to-date information including how to categorise the [funding] flows,” he said.

But he warned – as did many climate finance analysts who contacted Climate Home about the report – there was still an unfinished debate on what should be counted as climate finance.

“The big jump from 2012 to 2013 in public bilateral funding for climate appears to be the result of countries counting more or all of their projects categorised as having climate adaptation and mitigation as a ‘significant’ but not primary objective,” he said.

One problem is that UN cannot agree a common definition on what money can be classed as low carbon.

The result is some countries like Japan has been rating investments in efficient coal plants as climate-friendly, to the shock of green groups. The OECD did not count such projects.

Others – like France – distribute most of their funds in the form of loans. Germany, on the other hand, usually offers grants. The disparity is not reflected in the headline figures.

Export credits – used by countries to help domestic industries thrive aboard – are included, as are some overseas development aid donations labelled “climate-friendly”.

“Developed countries need to engage developing countries on what is acceptable in terms of ‘what counts’ towards the $100 billion,” said the WRI’s Ballesteros.

“Finding a middle ground (for example do they accept MDB climate finance as being counted) is critical to securing an agreement for the pre-2020 finance pathway.”

What’s not contested is the huge disparity between funds devoted to carbon-cutting projects like solar farms compared to efforts to help countries adapt to changing conditions.

Just 16% of funds between 2013-14 were directed towards adaptation. This fell to 10% for private sector investments.

The OECD report argues that it’s hard to track adaptation investments as they are often “integrated into mainstream development” such as agriculture or water.

And while planting a mangrove forest to slow coastal erosion is usually cheaper than building a wind farm, Tim Gore at Oxfam says the low figure is evidence adaptation is being “short-changed”.

Marcela Jaramillo, finance policy advisor at the E3G think tank, said it’s proof that a specific pot of government finance must be set aside to help countries weather-proof their economies.

The decision by the UN-backed Green Climate Fund to allocate 50% of all funds to adaptation could be used as a template for others, she added.

Few experts Climate Home spoke to said the study will offer much reassurance to the world’s poor. “They won’t buy it at all,” said one, speaking off the record.

Ballesteros said it underlined the need for a “sustained commitment to new public climate finance commitments” with a specific focus on adaptation.

Expected announcements this week from top multilateral banks to double climate finance contributions will help, along with a pledge to screen all projects for climate risk from 2018.

“Everyone was asked to double funding on the basis the OECD’s figure was $50 billion,” a senior MDB official told Climate Home. The path to $100bn had to be sorted by Paris, they added.

Still, numbers aside, where this study may boost talks ahead of Paris is by its contribution to the debate on tracking and reporting climate finance.

Coal projects masquerading as low carbon is out, a move that will disappoint Japan, Slovenia and the Czech Republic, who all classed these investments under their climate portfolio.

The role of export credits, MDBs and the potential to leverage more private sector funds are also under renewed scrutiny.

“Let’s not get locked into numbers… the report shows us how climate finance flows are working,” said Jaramillo. “The underlying information, assumptions and methodologies are helpful.”

Barbara Buchner, senior director at the Climate Policy Initiative, which co-sponsored the report, said it would contribute to improve the tracking and reporting of funds.

“Our hope is this will contribute to building transparency and confidence ahead Paris, and in this way help unlock progress in climate finance,” she said.

For Roberts, it underlined that the old ways of measuring finance – allowing countries to interpret how their donations should be classified – should be abandoned.

“There must be established independent checking of how contributor countries are categorising activities, and of the actual delivery and use of funds, and evaluation of outcomes,” he said.