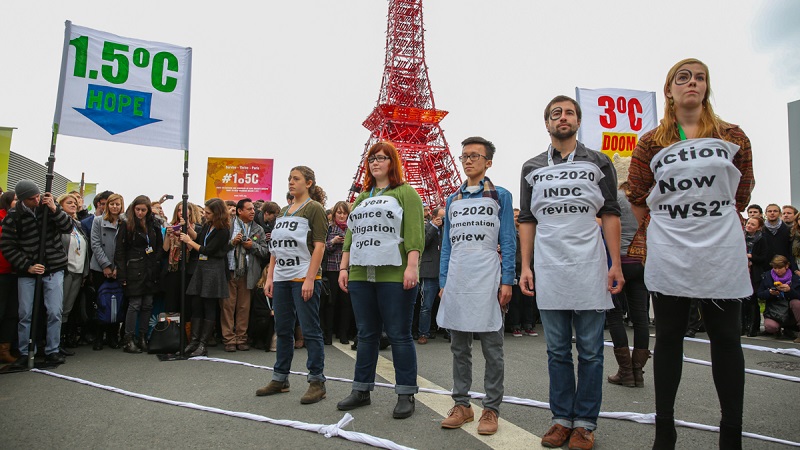 Activists calling for a 1.5C warming limit in Paris (Photo by Kiara Worth/IISD)

The UN’s climate science panel faces a tight deadline to drum up research on a 1.5C global warming limit.

Adopted as an aspirational goal at last December’s Paris summit, the 1.5C threshold is seen as critical to protect vulnerable communities. But most available analysis focuses on the longer standing 2C target.

Accordingly, in the small print of the deal was a request to the Intergovernmental Panel on Climate Change (IPCC) for a special report on 1.5C, by 2018.

That effectively gives researchers 18-21 months to flesh out “fairly sparse” literature, said British scientist Jim Skea. “There have been meetings in various countries on how existing research could be tweaked to get things into the public domain in time.”

He was talking to Climate Home ahead of a meeting of the IPCC’s 34-strong expert bureau in Geneva this week, of which Skea is a member.

The call for analysis on 1.5C is only one of 27 proposals for special reports submitted by countries, UN bodies and observers. The IPCC only has the capacity to pursue two or at most three.

While the bureau can advise on technical considerations, the decision rests with the same governments who agreed the Paris deal. National representatives meet in April.

“People are tending to work on the assumption that the 1.5C report will go ahead,” said Skea.

But it looks like a tall order, requiring a complete overhaul of the global fossil fuelled economy. National climate policies submitted towards the Paris pact only bend the temperature curve to 3C. With a time lag between greenhouse gas emissions and warming, it may already be too late to avert 1.5C.

“If the whole thing was driven by scientific curiosity, it is probably true that we would not work towards 1.5C at the moment,” said Skea. But governments’ request for more information was “legitimate” and scientists are trying to deliver.

Other proposals for special reports have been grouped into nine clusters. The themes considered most likely to be approved are oceans and land use.

The first, an amalgam of suggestions from China, US, South Africa, Spain and Monaco, spans sea level rise, permafrost melt and fish stocks. The second, backed by the EU, Saudi Arabia, Algeria and Switzerland, covers desertification, agriculture and forests.

Each special report is expected to cost in the region of US$1 million, mainly going on meeting expenses. Hundreds of researchers contribute their time to IPCC work unpaid.

They come on top of the IPCC’s remit to produce regular comprehensive assessments of the state of climate science. These have been put out every 5-7 years, with the latest in 2014. The next round might be pushed to 2022/23, to align with international policy cycles.