Sweet harmony: Why UN climate plans should use the same metrics

If the INDCs are going to be the foundations of a global climate solution, we need to make sure they are durable and clear, argue experts

By Pieter Pauw and Kennedy Mbeva

The Paris climate summit was a diplomatic triumph, one built on nearly 190 national climate action plans delivered to the UN in 2015.

Known as Intended Nationally Determined Contributions (INDCs) in UN jargon, these documents offered the clearest signal yet the world is on a pathway to a low-carbon future.

But with the party over and the champagne bottles sent for recycling, it’s time to look at these INDCs in a more analytical light.

If these INDCs are going to be the foundations to address climate change globally, we need to make sure they are clear, secure and durable.

We also need to look at the INDCs in the context of all three aims of the Paris Agreement: not just limiting global warming, but also climate finance and adaptation.

Paris tracker: Who pledged what for 2015 UN climate pact?
Comment: The INDCs are a mess – and the UN needs to take control

Ever since the EU-28 presented its climate plan on 6 March 2015, the German Development Institute and the African Centre for Technology Studies have built a model to analyse and compare the ambitions of governments.

So far we have arrived at some surprising results, and highlighted some gaps in submissions that will need to be filled for these plans to be a sustainable game changer in the climate change negotiations.

What was revolutionary about the INDCs is that they left countries to work out the level of action they believed was fair and ambitious in the context of the global challenge to address climate change.

Our research shows that as countries set their own priorities and ambitions, the old and ineffective developed – and developing countries split has now progressed beyond the so-called ‘firewall’ that divided those deemed rich and poor in 1992. 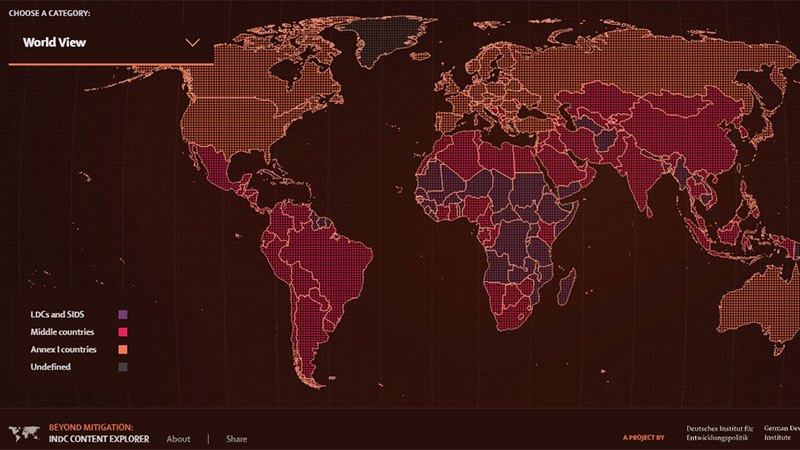 The INDC content explorer splits countries into three categories which can be summarised as poor, emerging and industrialised (Pic: http://klimalog.die-gdi.de/)

This is in line with the subtle differentiation towards Least Developed Countries and the Small Island Developing States in the Paris Agreement.

Second, while differentiation of countries’ responsibilities to address climate change has implicitly always been about mitigating climate change, the INDCs make adaptation and finance part of the equation too.

Although Annex I countries hardly mention adaptation in their INDCs, the majority of the other countries do.

In particular, Least Developed Countries (LDCs) and Small Island Developing States (SIDs) provide details on adaptation when it comes to plans and strategies, as well as cost indications.

Similarly, Annex I countries hardly mention climate finance. For middle income countries, however, and for LDCs and SIDS in particular, climate finance is extremely important.

The importance of aspects such as adaptation and climate finance in INDCs marks a leap in the debate on the kinds of responsibilities countries have to address climate change.

The huge differences between individual plans can partly be explained by the weak guidance on their formulation.

Despite intensive discussions countries have not been able to agree on INDC content and scope at the climate negotiations, which could prove to become problematic over time.

For example, the previously mentioned contrast on climate finance between the three groups of countries is challenging when comparing plans.

In its 38-page long INDC, India mentions the enormous costs of adaptation and mitigation.  Both are made partly conditional to international climate finance, without further explaining how or to what extent.

In contrast, Kenya’s succinct INDC makes both mitigation and adaptation fully conditional to international finance, but it refrains from mentioning potential costs.

To conclude: INDCs are a game-changer that will determine the climate politics and policies for years to come.

Countries have a unique chance to determine how exactly – but they need to improve the guidance for the formulation of these climate action plans.

Pieter Pauw is an international climate policy specialist based at the German Development Institute. Kennedy Mbeva is a research fellow at the African Centre for Technology Studies.