Countries that staked plans on 2C warming now aim for 1.5C. Will they be reflected in stronger carbon-cutting policies? 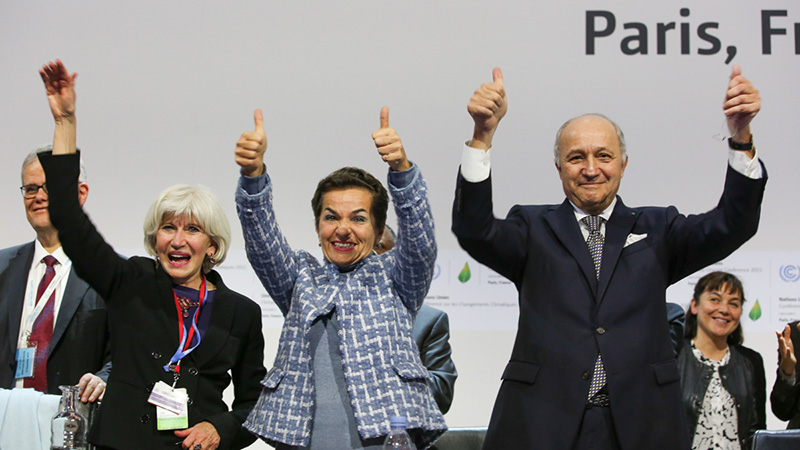 Countries will need to radically green their energy, farming and transport sectors to meet a new goal to limit warming to 1.5C above pre industrial levels, say experts.

On Saturday over 190 countries agreed to “pursue efforts” to meet a new 1.5C threshold, deemed safer for climate vulnerable countries and ecosystems.

For big carbon polluters, 2C of warming this century was the working assumption for environment ministries drawing up climate plans before the Paris summit.

After a sustained campaign from some developing nations led by the Marshall Islands, governments agreed to tweak the temperature goal by half a degree Celsius.

It was totemic for nations vulnerable to climate change; a concession by wealthier countries traded off to secure a broader agreement. But it signals a harder and earlier comedown off dirty forms of energy.

The world will have to be able to offset whatever fossil fuels it burns in tree-planting or negative emission technology by 2050 at the latest, according to Hans Schellnhuber, director of the Potsdam Institute.

Glen Peters at Cicero Institute says a total phase-out of oil, coal and gas is necessary within 15 years.

Are governments capable of a low-carbon transition at such breakneck speed?

On Monday, the European Union was quick off the mark. Climate boss Miguel Arias Canete said it is unlikely before 2020 to deepen to goal to slash emissions 40% within 15 years.

The UK, Germany and France have previously suggested it could target 50% through pollution permits in developing countries under a new global deal. But Canete said stronger targets will be the work of the next Commission.

“What we are doing today in 2015 and next is implement legislation to be able to achieve 40%… we are not there yet,” he told reporters on Monday.

Moments after the Paris deal was signed off Amber Rudd, UK energy and climate secretary of state, argued 1.5C was an “aspirational” goal.

“We remained committed to being as ambitious as we can, but at the moment just 2C is operational,” she said.

The United States, the world’s number two emitter, is at the extremes of what it can do without requesting more powers from Congress, said Dirk Forrister, president of the carbon trade group, IETA.

The Obama administration has promised to cut carbon emissions by up to 28% by 2025 on 2005 levels. The outlook under a new President from 2016 isn’t brighter.

The young Trudeau government in Canada will revise its pledge by March.

“Details of what they might do at a federal level are up in the air until they have consulted with the provinces,” added Forrister.

China is targeting an emissions peak by 2030. That was seen as a conservative estimate by analysts, before it emerged it has been underreporting its coal consumption by up to 17%.

India, which set targets to cut carbon per unit of GDP, but no peak date is pushing ahead with coal plans.

Delhi still plans to double coal production by 2020 and rely on it for decades afterwards, said a senior official, reported Reuters.

“Our dependence on coal will continue. There are no other alternatives available,” Anil Swarup, the top bureaucrat in the coal ministry said. “Nothing has changed (following the Paris accord).”

The ink is still wet on a UN deal signed on Saturday evening, which among several decisions has promised a ‘global stock-take’ of pledges in 2018. Countries have backed five-yearly reviews, but aren’t bound to ratchet up their pledges.

Over 180 nations have now submitted plans, though they only slow warming to 2.7C this century, if implemented and under best-case scenarios, say analysts.

Consultants PwC highlight the gap between current policies and the 2C goal. Countries need to double their carbon-cutting efforts from 3 to 6.3% a year just to get there. 1.5C is even tougher.

“The aspiration and rhetoric in the current text… will not deliver reductions in CO2 emissions,” said the Tyndall Centre’s Kevin Anderson.

Still, for IETA’s Forrister, countries leave Paris with a higher degree of confidence their peers are stepping forward.

“I think the spirit of cooperation coming out of Paris should continue and I sure hope now that some of the political deals are cut, it will enable the technical negotiators implementing rules and guidance, that they can get past the quarrels of the past.”