Heavyweight investigation into how business reports vulnerability to climate policies and impacts could leave many corporations exposed, say experts 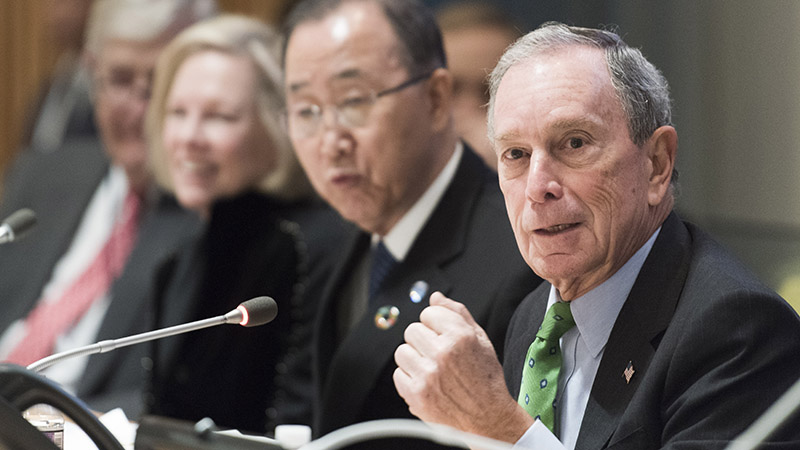 Michael Bloomberg is on the warpath. In his sights: corporations who fail to disclose the risks climate change poses their business model.

The billionaire founder of media giant Bloomberg LP, UN climate envoy and former mayor of New York is heading a taskforce to boost the quality of climate reporting.

Set up on the sidelines of the COP21 Paris talks last December, the Financial Stability Board-backed initiative met for the first time this week. In just over a month, it releases its initial findings.

In an interview with the Financial Times on Monday, Bloomberg said momentum behind the taskforce came from major institutional investors.

They worry how “acceptable that company is to the people they work for,” he said. Environmental awareness was a “competitive advantage,” he added.

Recent analysis suggests most corporates are ignoring the potential consequences of global warming, deliberately or otherwise.

Last year the Asset Owners Disclosure Project revealed just 7% of the world’s 500 largest funds – collectively worth over $40 trillion – could calculate greenhouse gas emissions in their portfolios.

Only 1.4% had reduced their emissions intensity from 2014, while a paltry 2% had a target for 2016. Few knew how exposure to future extreme weather events could affect their investments.

This has to change – and fast – according to Steve Waygood, chief responsible investment officer at Aviva Investors and a newly appointed member of the taskforce.

The goal of making finance flows consistent with a low carbon pathway is explicitly laid out in Article 2 of the Paris climate agreement, he told Climate Home at an event in London outlining the initiative’s ambitions.

“If policymakers don’t deliver on COP21 we will have potentially catastrophic climate change,” he said.

“This is about creating a market in information that enables investors and individuals to understand where their money is invested and how it’s supporting the transition to a low carbon economy.”

It’s a position some leading funds are coming round to. Last week Larry Fink, CEO of the world’s largest asset manager Blackrock, said environmental risk had now become a key indicator for his company.

What are the risks?

It depends on your business. For oil and gas companies, the main issue is that climate policies will slash fossil fuel demand. That means investment in finding more hydrocarbons may be wasted. For agricultural businesses, changing weather patterns could hit crop yields. For banks and other financial institutions, it’s about limiting exposure to these risks in their portfolios.

The guidelines released by the taskforce will be voluntary, but supporters hope peer pressure will create a snowball effect after they are released.

“We need clear, honest and reliable data,” said Mary Schapiro, chair of the US Securities and Exchange Commission from 2009-2012 and now vice president at the Sustainability Accounting Standards Board.

“After Paris no responsible company can ignore the requirement to stress test their business against goals to limit warming to 1.5C and 2C,” said Mindy Lubber from Ceres, a US sustainability group.

“Climate risk comes in many forms. Carbon exposure, regulatory liability are probably the best in terms of data availability,” he told Climate Home.

“But when it comes to exposure to extreme weather – that’s very poorly assessed and disclosed on. It’s a bit of a mystery how big corporates will be affected by extreme weather impacts.”

A report commissioned by Aviva last year revealed climate change is expected to knock US$4.2 trillion off global asset values by 2100, based on current prices. 6C of warming could triple that figure.

Coal companies Aviva has stakes in have been put on notice: clean up or we’ll ditch our holdings. It also plans to invest up to $3.9 billion in renewables.

But it’s still an anomaly in a world where fossil fuels rule. Paris has made little impact on Exxon, BP and Shell, who plan to increase their oil production 25-30% in the next decade.

And it’s a strategy that doesn’t add up in a world aiming to limit warming to 2C, said Mark Campanale, head of the Carbon Action Tracker think tank.

“They don’t recognise a low demand scenario for their products,” he said.

But a new reporting code mandating tougher carbon disclosure could allow investors to work out if those reserves are viable: “Fossil fuel companies should recognise that 2C is an international default position.”