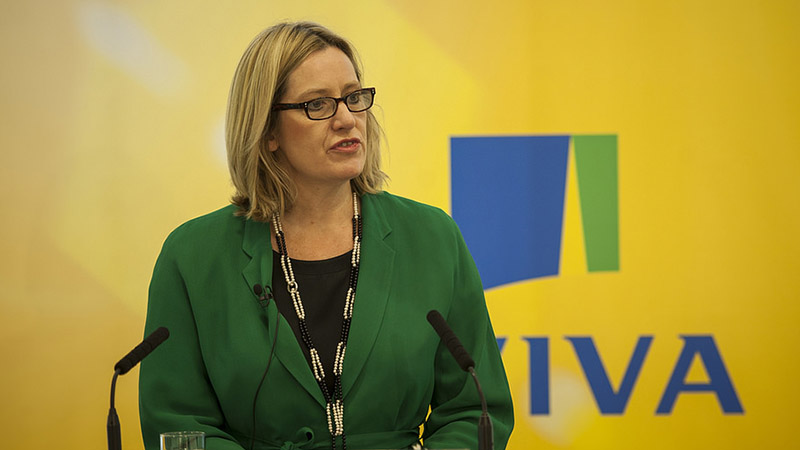 It has been a curious month for observers of the UK’s climate policy.

On the one hand, the government has hurled incentives for solar, wind and energy efficiency into a green bonfire, sparking fury among environmental groups.

On the other, the Foreign Office’s chief climate envoy launched a UK-backed risk study warning rising temperatures were one of the most serious threats facing the world.

All this as plans for a global greenhouse gas slashing deal in Paris edge closer to fruition, according to envoys involved in UN talks, spurred on by the French government.

Amber Rudd attempted to square the circle in a speech at the headquarters of Aviva Investors today, her first since being appointed UK energy and climate secretary.

Achieving a deal in the French capital this December was a “priority” she said. Climate action was about economic security “plain and simple”.

Rudd’s argument is that the UK is on course to meet its 2020 carbon reduction goals. Given emissions fell 8% in 2014, she’s likely right.

Support for greener energy at current levels would put a £1.5 billion hole in her department’s finances, she said, indicating she wants more “cost-effective” approaches.

“What I am not going to do as energy and climate change secretary is waste any time re-running old arguments about whether climate change is happening or not,” she stressed.

It was a bullish speech delivered with confidence to an audience of senior investors, CEOs and the man who will be the UK’s lead climate negotiator in Paris.

A veteran climate politics observer and advisor to a former prime minister said afterwards it was a good pitch and all she could probably say at this stage.

Taken in isolation, he’s probably right. But Rudd was unlucky that before her speech, Monica Woodley from the Economist Intelligence Unit had unveiled some alarming new research.

Expected losses to the current stock of manageable assets – worth an estimated $143 trillion – is expected to total $4.3 trillion by 2100 as a result of climate impacts, she said.

That’s equal to Japan’s entire GDP or the value of the world’s oil and gas industries.

Warming of 5C above pre industrial levels would likely lead to $7 trillion, the size of the London Stock Exchange, while 6C would hit $13.8 trillion.

“Unless climate change is mitigated this represents a permanent divergence towards a path of lower growth and prosperity,” Woodley added.

The study said that to avoid “sleepwalking” into a climate crisis, more coordinated action from governments, investors and the UN is needed.

“Governments have no excuse for inaction,” reads its conclusion. “Despite the efforts of the private sector there is substantial scope for regulators and governments to make a contribution.”

The costs of action are – fairly or not – being used by the UK to tone down its climate action.

But it’s not clear yet what news of these condemned policies (without any replacements) will send to other countries involved in pulling together a Paris deal.

Small island developing states and some of the poorer African countries desperately want to see more action pre-2020 in order to limit global warming to 1.5C.

The UK’s new announcements seem to suggest it – for one – is not prepared to do this through domestic actions.

In a statement Friends of the Earth UK said the cuts were “sticking two fingers up” at other countries involved in the Paris talks. Greenpeace UK called them “vandalism”.

Nick Mabey from the E3G environmental think tank said the country’s “diplomatic credibility” was now at stake in the coming months.

“The message is you have got to have a plan before Paris or you can’t go there as a progressive,” he said.

Asked by RTCC if the latest round of green policy cuts would diminish the UK’s standing at the Paris talks later this year, Rudd replied the country would remain a “world leader” on climate action.

“I have been on these negotiations for over a year now. They do not centre around what renewable subsidy is supported in the UK or in any country,” she said.

“We have a strong reputation for speaking about about this through prime minister David Cameron and also because we have strong support through our financial overseas development aid through which climate finance and support against climate change is woven.”

She added: “The UK is considered and will continue to be a world leader on that and that is partly because we have some of the toughest targets in the world and we will continue to maintain that.”

Still, in a week where her department has been busy shredding policies, she did have one small but significant announcement.

The UK will join a group known as the Friends of Fossil Fuel Subsidy Reform, which includes Denmark, New Zealand, Norway and Sweden.

Given fossil fuel subsidies will hit $5.3 trillion in 2015, according to the IMF, radically slashing this support has the potential to be a game-changer in cutting emissions and boosting renewables.

And given the government’s skill at speedy cuts, it could always start afresh by reviewing the estimated $1.2 billion a year of subsidies the UK donates to fossil fuel explorers.