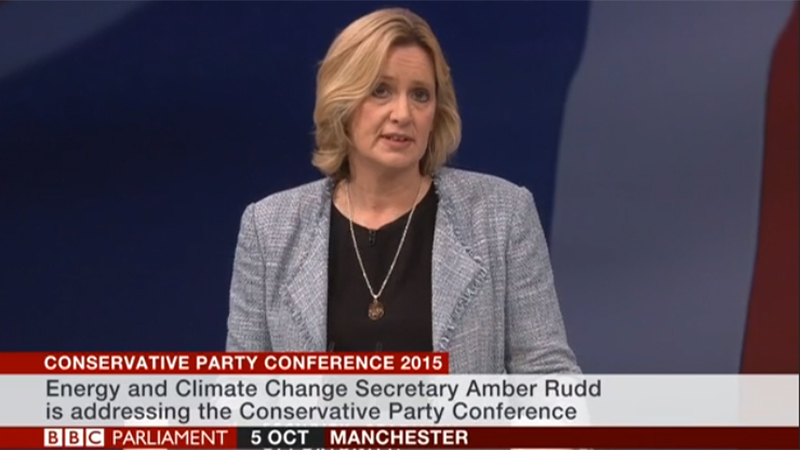 Secretary of state for energy and climate change Amber Rudd was appointed this May (Screengrab: BBC Parliament)

UK energy secretary Amber Rudd said the government cut green subsidies because she was a “proud pro-green Conservative” on Monday.

Carbon emissions would fall faster through technological innovation and not subsidies, she told the ruling Conservative party conference in Manchester.

“We must be tough on subsidies, pro-competition, anti-monopoly, pro-innovation and pro-consumer.”

It was her first big speech since controversially ditching a suite of green policies after her party won a majority in May’s election.

The government has been lambasted by everyone from industry groups to former US vice president Al Gore as policy reversals have created uncertainty about the country’s commitment to a low carbon transition.

Meanwhile, it is fast-tracking fracking to spur the economy and reduce dependence on energy imports.

That risks eroding its hard-won international reputation as a leader on climate change, say observers.

.@AmberRudd_MP says solar costs continue to fall – as if by magic! Majority of cost down to efficiencies of British companies – now at risk.

Climate action couldn’t be left to the opposition Labour party she said, whose energy policy was “ridden with gimmickry” after proposing price freezes and renationalisation of industry.

The Conservatives would insulate 1 million homes to lower energy consumption, she announced.

“The danger of global warming is real enough for us to make changes and sacrifices so we don’t live at the expense of future generations,” Rudd concluded, quoting Thatcher.