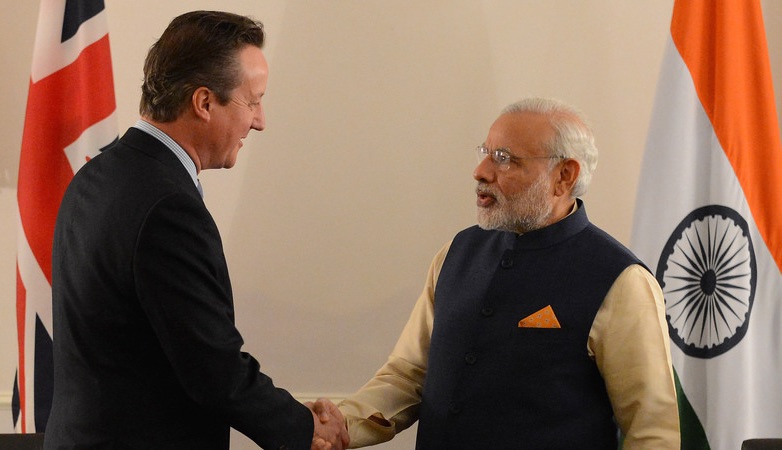 It’s official. Climate change will feature on the agenda of Indian prime Minister Narendra Modi and his British counterpart David Cameron when they meet in London later this week.

Modi is scheduled to arrive in the United Kingdom on a three-day visit on November 12, the first by an Indian prime minister in nearly a decade.

Amid other requests, Modi will be asking for technological cooperation from the UK in its fight against climate change, said India’s environment minister Prakash Javadekar.

“England, UK has done many good things…particularly in the technology sector. We are expecting greater technological cooperation throughout the world multilaterally, but bilaterally, yes,” Javadekar said before leaving for Paris to attend a French-hosted climate meet.

India has long been a strong advocate that green technology needs of emerging economies are crucial in capping greenhouse gas emissions, arguing for financial and technological support from developed nations.

Last week, Modi vowed to bring power to 18,000 Indian villages, many of which currently lack an electricity pole, in the next 1,000 days.

This is part of a wider drive to develop 175 gigawatts of clean energy by 2022, as outlined in the country’s recent climate plan.

But to ensure India can install enough wind, solar and nuclear and other clean energy sources, Javadekar said it will need help gaining access to technologies held by richer nations.

It’s an issue he’s likely to bring up during the two-day Paris gathering of nearly 80 ministers that concludes on Monday.

India promised to shave a third off the rate at which it emits greenhouse gases over the next 15 years, in a long-awaited contribution towards a proposed Paris climate pact this December.

The world’s third-largest emitter of greenhouse gases also said it would target 40% cumulative installed power capacity from non-fossil fuel sources by 2030, though said this would require international support in the form of finance and technology.

The country also pledged to create an additional carbon sink equivalent to 2.5-3 GT of CO2 by planting more forests by 2030.

The Conference of Parties (COP21) in Paris, scheduled from November 30 to December 11 this year, will for the first time in over 20 years of UN negotiations, aim to achieve a legally binding and universal agreement on climate with the aim of keeping global warming below 2C.

Speaking in Delhi, Javadekar stressed that despite its status as an emerging economy, India strongly supported the notion of climate justice under a new UN deal, especially for poorer nations.

And he said observers would see a new, constructive approach to the negotiations from the country, admitting that earlier perceptions of Delhi’s interventions at the UN were “negative”.

“India is leading from the front in climate dialogue… it has become positive and with our huge renewable programme; we have really made a very important impression in the world,” he said.

“We are sure that we will make the world discuss … lifestyle issues [consumption levels] and we will have equitable, fair and just climate deal in Paris. We are raising the voice for climate justice for all poor countries and poorer sections of society.”

Preliminary estimates indicate India would need to spend around $206 billion between 2015 and 2030 on adaptation measures in the agriculture and forestry sector, among others.

The primary goal for India in Paris would be to ensure that the responsibilities for countering climate change should not affect its right to development and providing a decent livelihood to its people, he said.