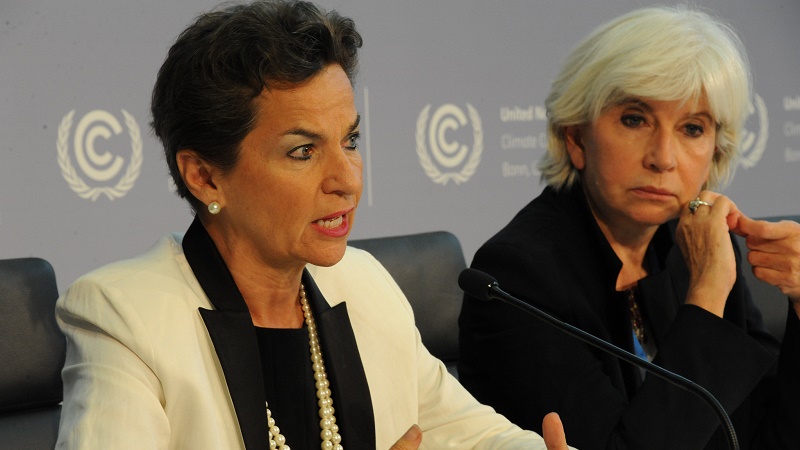 Christiana Figueres and Laurence Tubiana give a press conference (Flickr/UNclimatechange)

There is no secret text in the making for a UN climate deal in the making. The 55-pager published last Friday is all there is. Get on with it.

France’s chief climate diplomat Laurence Tubiana could not have been clearer: “There is no plan B,” she told media at the end of a gruelling week of negotiations between 195 countries in Bonn.

“I can’t be more explicit than I have been all along the week.. I don’t think parties should shy away from responsibilities. We don’t need another text… we don’t need to invest in a new one.”

In most other arenas having a backup plan is a good idea. In the context of the global UN climate talks it’s the worst one possible.

Six years ago Denmark, hosts of the 2009 Copenhagen summit, screwed up years of careful diplomacy and the prospects of a deal to curb greenhouse gas emissions by working on a secret plan with a few countries.

Those left out were incensed. The meeting descended into acrimony.

Tubiana – an advisor to one of the UN’s top officials at that meeting – saw at close hand that trust between all parties is the essential ingredient for any proposed pact.

And so the French government has adopted a win-or-nothing approach for Paris. With strong emphasis on winning.

After last week’s talks there’s now a 51-page document containing a set of proposals agreed by all countries taking part.

That’s not to say they’re nearing consensus on what a deal will look like. Far from it, according to Alden Meyer from the US Union of Concerned Scientists, who was in Bonn last week.

“For some of the toughest issues, such as ramping up climate finance for adaptation and mitigation in developing countries, as well as helping vulnerable countries cope with increasingly severe climate change impacts, little or no progress was made,” he said.

There is a fine line between charting as path for all countries to a low carbon future and ensuring poorer, vulnerable states are offered as much help as possible if and when they are hit by projected extreme weather events.

They also want a plan for irreversible loss and damage linked to carbon emissions to be enshrined in a Paris deal. Wealthier nations fear this is a trojan horse for huge compensation claims.

Known as loss and damage, it’s a divisive, contested issue and will be a bargaining chip when the December summit opens.

But this, argued Tubiana, is exactly why there are these discussions.

Otherwise we would all be home drinking hot chocolate and not worrying about average temperatures blowing the 2C above pre-industrial levels threshold.

Now it’s time for countries “to be serious and engage in real negotiation” she warned. “The point is the negotiators did not make compromises here. They wait for the final moment clearly. That’s how this process works.”

Speaking to reporters from Washington DC on a Friday evening conference call, lead US envoy Todd Stern said he was not “at all worried or concerned”. The text would be “refined and shrunk” he said.

Some expressed concern at the lack of time. An envoy from Barbados declared himself “not encouraged”. Hope springs eternal, he added gloomily.

Mexico envoy Roberto Dondisch cited Hurricane Patricia as evidence the frog was already in the boiling water. “I don’t think I need to say more about the urgency to get this deal done,” he said in an emotional address.

Russia’s Oleg Shamanov called for an extra session of talks. “The most experienced lawyers on this Earth would not be in a position to interpret this text,” he said.

That request was not backed by the other 194 countries in Bonn. Instead ministers from those governments will try working their way through the heavily bracketed text at a 8-10 November meeting in Paris.

R-E-S-P-E-C-T: It’s (not) all these climate negotiators are asking

Amid the gloom there are some green shoots. Despite an overwhelming narrative of developed v developing countries some small yet extraordinary alliances across the divide developed last week.

One – made up of Australia, Brazil, China, European Union, LDCs, Marshall Islands, Norway, Saudi Arabia, South Africa and the US – submitted a proposal relating to the communication of greenhouse gas cuts now and in the future.

Another involving 47 countries offered thoughts on how carbon markets could be used to tackle global warming. The US, South Africa, EU, Brazil, Kenya and Togo were among those involved, as was Bolivia, long an opponent to all types of markets.

“The diversity of the countries represented here is unusual for the process and makes it more likely that this proposal will continue to be referred to in Paris,” said Jeff Swartz, head of policy at the International Emissions Trading Association.

“Whenever you’ve seen good outcomes [here] it’s because an odd bunch of countries have got together, and that’s happening here,” said Liz Gallagher, head of climate diplomacy at the E3G think tank.

There’s also the huge political investment many world leaders have made in this process to think of. US president Barack Obama doesn’t go for a few days now without mentioning climate change.

France’s desire for a Paris deal is a given, but China’s Xi Jinping and India’s Narendra Modi have also talked tough on the need to curb emissions while ensuring their economies grow.

The price of renewables continues to fall, air pollution concerns in emerging economies dependent on coal continues to rise. Even the head of ExxonMobil is offering his views on a way forward – make of that what you will.

Still – Everest awaits. The number of brackets surrounding words or phrases indicates there is no agreement, and this currently stands at 1500.

Last week’s talks ensured a “critical first step” had been taken said Gurdial Singh, a Malaysian diplomat who speaks for a group of oil-reliant states including Iran, Saudi Arabia and Venezuela. The credibility of the UN process had been “restored” he added.

A fundamental task for countries in Paris will be to try and connect the positivity about climate action outside these talks to what is going on inside.

The ultimate aim is not simply a nicely worded document but a strong message to the world that the journey to a low emissions world is under way.

So far, that path may be clear to those diplomats and wonks working on the draft text, but it’s “not very clear to anyone walking down the street” said UN climate chief Christiana Figueres.

“Does it put pressure on Paris? Well…that is what Paris is for.”