UN calls for ministers as climate talks head for Paris

As fraught final round of interim talks ends, diplomats turn to their political masters to land an elusive global deal 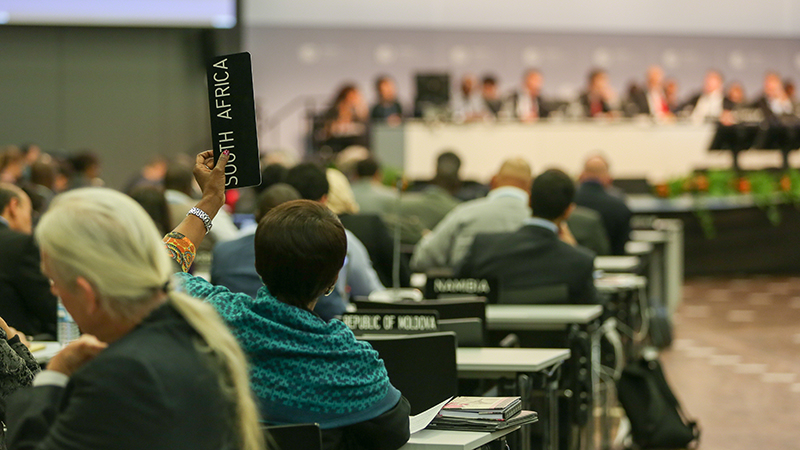 South Africa and G77 spokesperson, Joyce Mxakato-Diseko, raises her placard to speak during the Bonn session (Photo by IISD/ENB)

Enter the politicians. Officials working on plans for a global climate change deal say it’s time for ministers and world leaders to get stuck into the meat of UN negotiations.

After a rotten start, five days of talks between nearly 200 countries in Bonn this week concluded on Friday with the publication of a new draft text for a deal, to be finalised at a Paris summit this December.

At 55 pages it’s heavier than the 22 which made up an October 5 version, but contains “everything we need to get a good deal”, according to lead Greenpeace climate policy advisor Martin Kaiser.

“We are reaching the arrival line and there is some anxiety,” said Ahmed Djoghlaf, an Algerian official co-chairing the international talks. “We know there are some key issues that cannot be decided by negotiators.”

It’s a common refrain. “Some issues are not going to be resolved at negotiator level,” said EU lead negotiator Elina Bardram.

Still, the document is wracked with contradictions and polarised views around the central dilemma that underpins these talks: how will the burden for tackling global warming and coping with its future impacts be shared out?

For example, should the EU and US still have to lead on tackling climate change when their combined share of global carbon emissions is 26%, below China on 29%?

Always bubbling, the debate exploded at the talks in Bonn, South African ambassador Joyce Mxakato-Diseko talking of a new “apartheid” where the rich dictated terms to the poor.

Bardram had a different take. “It is somewhat unfortunate that some countries are reverting to rigid and outdated rhetoric linked to income levels in the 1990s,” she said.

The French government hopes a meeting of ministers it’s hosting from 8-10 November can help ease the pressure. It needs more clarity before November 29, when world leaders descend on Paris for day one of the UN’s main summit.

“France is opening up to all ministers and you can see what’s happening – it will try and get something which can be taken to ministers in Paris and it can say – most of you were there,” said Ronnie Jumeau, Seychelles climate ambassador. 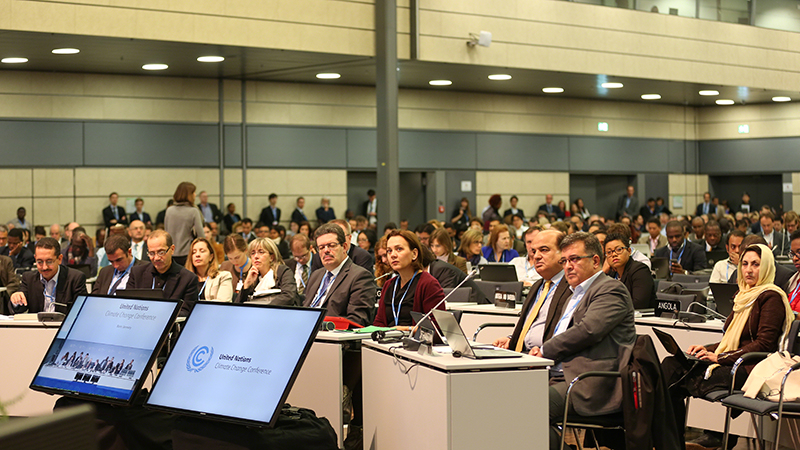 Delegates during the ADP session (Photo by IISD/ENB)

Top of the list will be the level of finance on offer from a bloc of countries the UN rated as wealthy in the early 1990s, and which agreed in 2009 to deliver $100 billion a year of climate finance from 2020.

The 134-strong G77 + China group wants the EU, US and other developed nations to commit to a $100 billion floor from 2020, and agree to meet their funding requirements in the years to come.

In turn the EU and US want developing countries to recognise there’s now a broader base of potential climate finance providers on offer, including the private sector and emerging economies like China, which recently pledged $3.1 billion.

With trillions needed to drive green investments and prepare for future climate impacts, Bardram argued all these sources of funds must be accounted for.

“A firewalled approach to climate financing is grossly insufficient,” she said. “South-south [between developing countries] finance cooperation should be celebrated.”

That’s not a view that gains much traction with Gulf petro-states fearing they could be asked for cash, emerging economies and civil society.

They argue a recent OECD report stating $62 billion was delivered to poor countries in 2014 was inflated. “Developed countries are still trying to wriggle out of climate finance,” said Mohamed Adow an observer from Christian Aid.

Timing is critical, former UN climate chief Yvo de Boer told Climate Home. “From a financial point of view this is probably the last chance in the spotlight for the next 5 years…it is important to focus on this,” he said.

Another EU official, speaking off the record, insisted the bloc was working on ways to “reassure developing countries that developed will continue with their agreements to provide finance.”

If finance looks intractable, the debate over how to tackle the loss and damage countries will face as climate impacts intensify is intensely puzzling.

Developed countries are terrified they could be landed with increasing bills if and when storms, droughts and the impacts from rising sea levels linked to climate change intensify. For vulnerable nations it’s a matter of “life or death,” said Adow.

The new political agreement on offer for Paris contains two options. One, suggested by the G77 + China, proposes the creation of mechanisms to deal with climate refugees and the potential costs from “potential and irreversible damage”.

The other, suggested by the US, Australia and New Zealand, says this should be deleted and references moved out of any new Paris treaty, a position which has enraged many observers.

“Don’t underestimate what is at stake here…impacts are already hitting home, affecting the world’s most vulnerable people and ecosystems,” said WWF’s Tasneem Essop.

It’s another situation that could be decided late in Paris, a developed country negotiator told Climate Home, as it too will need a political decision.

“We are engaging in a constructive way with good faith but what I’m observing with no options, that’s nervous for us,” said Amjad Abdulla, chief negotiator for the alliance of small island states. “Having no agreement is not an option for us.” 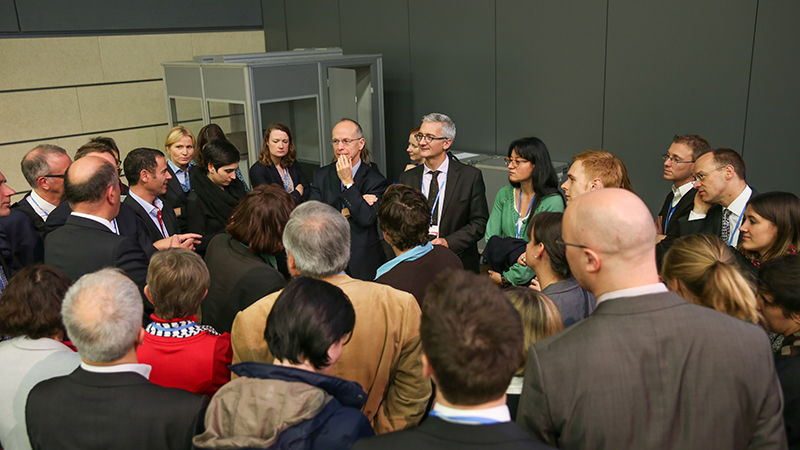 A question of trust

The good news for this process is no blood was shed in Bonn, despite a Thursday evening session that saw fierce interventions from Venezuela, South Africa, Sudan and Russia.

Progress was made on the section of the agreement covering carbon cuts and how these will be reported, said Jennifer Morgan, head of the World Resources Institute climate programme.

“The current state of the draft agreement reflects how close countries are to reaching consensus on [these] key topics,” she said.

And the beefed-up text means there are plenty of options for ministers to consider in Paris.

They could still agree to target a global warming limit of 1.5C, establish an international climate justice tribunal or a global goal to peak emissions by 2030.

[Parties aim [to achieve the global temperature goal], in accordance with the best available science [and the principles of the Convention], through [long-term global [low- [carbon][emission] transformation] [[climate][carbon] neutrality]], [and peaking their [net] emissions] [by 2030][20XX][as soon as possible], [with a [x]40-[y]70% net emission reduction below 2010 levels by 2050][according to the global carbon budget distribution based on climate justice], and [overall reductions][[net] zero emissions] [over the course of the century][by 2050][by 2100].]

But if anyone needed telling – the pre-emptive effort by the two men co-chairing the talks to cut the text down to size backfired badly – demonstrating the deep tensions and worries over this deal that linger.

“What we wanted to achieve was to have the basis for negotiations for Paris, and it is now owned by the parties,” Djoghlaf told reporters.

That much is true. But his confidence was not matched by other officials Climate Home spoke to on Friday, all tired, many aware of what the next six weeks will hold in store.

Any deal must send a strong signal the world intends to move to a low carbon pathway, said Bardram in her press conference. But that’s not at all clear from the current proposals, said de Boer.

Next week the UN will announce the results of a review into the 150+ national climate plans delivered so far. The results are predictable – not enough is on the table to avoid the 2C danger zone.

That makes for long hours for ministers and diplomats, some of whom may still have an ace up their sleeve, contended Dan Reifsnyder, Djoghlaf’s fellow co-chair.

“If I am in a negotiations I am not going to put all my cards on the table when the big talks are in December,” he said.