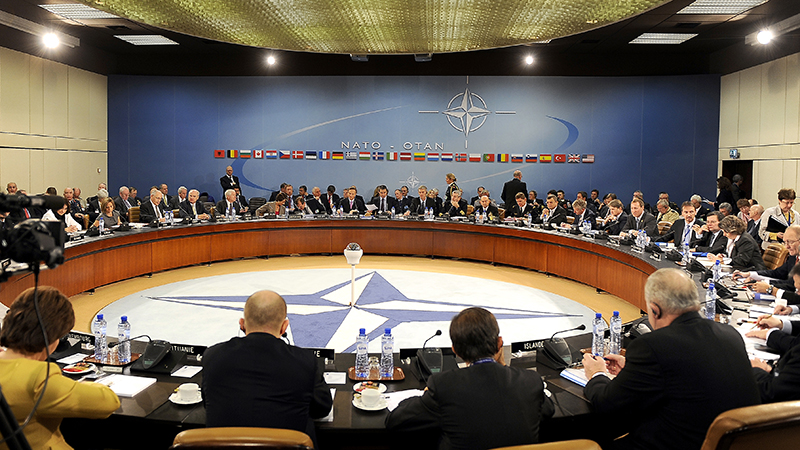 NATO defence and foreign ministers meet at HQ in Brussels in 2010. Climate change-related risks to the alliance’s security have been little scrutinised by members (credit: wikimedia commons)

A coalition of 250 parliamentarians is poised to call on members of the North Atlantic Treaty Organization to back an ambitious, legally-binding new climate deal this year.

Climate change poses “significant threat multipliers that will shape the security environment in areas of concern to the Alliance,” according to a resolution set to be adopted by Nato’s parliamentary assembly on Monday.

The security bloc’s 28 members should intensify co-operation with countries in regions vulnerable to climate impacts like the Arctic, the Middle East and North Africa, it adds, and enhance national preparations.

“If the world wants to stop irreversible damage to the planet, all governments must agree in Paris to clear, fair, and ambitious targets to reduce emissions,” said French lawmaker Philippe Vitel, who drafted the resolution as Nato PA’s special rapporteur of the science and technology committee.

The resolution is non-binding for governments, but the assembly’s resolutions are influential in shaping policy.

Nato has been criticised for not giving due attention climate change, save a mention in its Strategic Concept in 2010. The alliance is preoccupied by conflict between Russia and Ukraine, alongside a destabilising Middle East, which is putting pressure on members through a surge in refugees.

Secretary-general Jen Stoltenberg acknowledged climate change posed a security challenge and was “relevant” to Nato in a plenary meeting of the assembly on Monday.

“It can cause conflicts; it can increase the number of refugees. Climate change is something that is relevant to Nato,” said the former UN special envoy on climate change, but added the alliance should not advise the UN to act on climate.

Foreign ministers from the Group of Seven (G7) set up a working group earlier this year to examine climate change’s potential to make fragile states fail.

Members are expected to pass the resolution on Monday afternoon at the PA’s annual session in Stavangar, Norway.

“The security of Alliance members is at stake,” added Vitel. “Climate change is increasing the risk of violent conflict by exacerbating known sources of conflict, like poverty and economic shocks. The time to act is now.”