Evidence stretching back 40,000 years shows that global warming will increase drying in a region of East Africa where drought already causes humanitarian crises 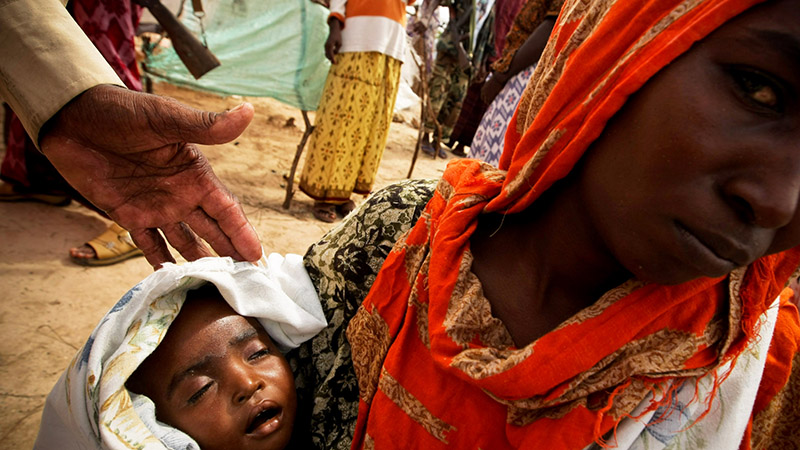 A woman holds her severely malnourished young child in a camp for Internally Displaced Persons (IDPs) in Mogadishu in 2011, during a sever drought that hit the region (Pic: UN photos)

One of Africa’s most volatile regions has become increasingly dry over the last century and faces a future of rising tension if this trend continues, US researchers say.

They say the rate of drying in the Horn of Africa is both unusual in the context of the last 2,000 years and in step with human-influenced warming. And they think the drying will continue as the region warms.

“Right now, aid groups are expecting a wetter, greener future for the Horn of Africa, but our findings show that the exact opposite is occurring,” says one of the study’s co-authors, Peter deMenocal, who heads the Centre for Climate and Life at Columbia University’s Lamont-Doherty Earth Observatory.

“The region is drying, and will continue to do so with rising carbon emissions.” The study, published in the journal Science Advances, was based on evidence stretching back for 40,000 years.

The researchers used a sediment core they had extracted from the Gulf of Aden to infer past changes in temperature and aridity. After matching the core’s record with 20th-century observations, they concluded that drying is likely to continue across Somalia, Djibouti and Ethiopia.

That contradicts other models, which have suggested that future warming might bring rainier weather patterns that could benefit East Africa.

“What we see in the paleoclimate record from the last 2,000 years is evidence that the Horn of Africa is drier when there are warm conditions on Earth, and wetter when it is colder,” says lead author Jessica Tierney, associate professor of geosciences at the University of Arizona.

Global-scale models used to predict future changes as the climate warms suggest that the region should become wetter, primarily during the “short rains” season from September to November.

However, the new study suggests that those gains may be offset by declining rainfall during the “long rains” season from March to May, on which the region’s rain-fed agriculture relies.

“If we can simulate rainfall in these arid tropical and subtropical regions better, we can understand the future impact of climate change”

The authors say the region has been racked with political instability and violence as it has dried. The Horn of Africa has suffered droughts every few years in recent decades − creating humanitarian crises as famine and violence spread.

In Somalia, as the political situation deteriorated amid the droughts of the 1980s and 1990s, hundreds of thousands of refugees fled the country, and pirates began raiding ships off the coast.

The 40,000-year old sediment core has already yielded insights into Africa’s climate. In 2013, Tierney and deMenocal showed that the Sahara, which once used to burst into verdant life with regular rainfall, suddenly dried out over a century or two, during a warm period about 5,000 years ago – not more gradually, as many researchers had thought.

Their work provided evidence that climate shifts can happen quite suddenly, even if the forces driving them are gradual.

This latest study uses isotopes from leaf waxes found in the sediment sample to compare rates of drying over the past 2,000 years.

The researchers found an increasing shift toward heavy hydrogen in the last century as the climate − which had experienced a wet period during the Little Ice Age (1450-1850 AD) − dried out.

Their findings suggest that climate modelling, frequently done at a global scale, would benefit from region-specific studies with higher-resolution results in high-impact areas such as the Horn of Africa

Tierney says: “If we can simulate rainfall in these arid tropical and subtropical regions better, we can understand the future impact of climate change.”

Oxfam’s representative in Ethiopia describes the situation − attributed to the El Niño periodic climate phenomenon in the Pacific − as “the start of a major emergency, which is expected to be serious and long”.

Meanwhile, parts of West Africa are suffering from the aftermath of severe floods − also attributed to El Niño − that have ruined crops and destroyed homes in Burkina Faso and Niger.