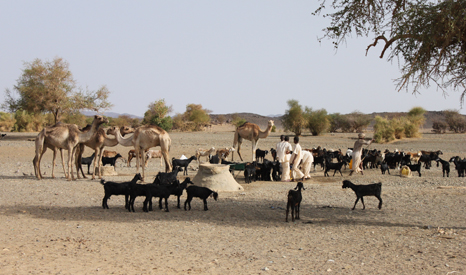 Pastoralist and farming communities in the Sahel have been hit by recurrent droughts
(Source: Flickr/SOS Sahel UK)

Foreign ministers meeting in Germany welcomed a study urging their members to boost at-risk countries’ resilience to climate impacts, and tasked a team with weighing up the proposals.

Ahead of pivotal UN talks in Paris at the end of the year, the G7’s annual summit in June is a key staging post on the road to a global climate deal.

With its members accounting for almost a quarter of the world’s heat-trapping gas emitted in 2010, the G7 summit offers a chance to take stock of countries’ volunteered emissions cuts, as well as a $100 billion commitment in adapting poor countries to an overheating planet.

“I am delighted that based on this study we can develop joint measures and give new impetus to international processes,” German foreign minister Frank-Walter Steinmeier said at the presentation of the report titled “A New Climate for Peace: Taking Action on Climate and Fragility Risks.”

“This is particularly important in light of the upcoming climate conference in Paris,” Steinmeier said from Lubeck, in northern Germany.

The report calls for the creation of a high-level G7 task force to address seven ‘compound risks’ identified by the four think tanks who compiled the report.

“Climate change is the ultimate risk multiplier,” said Lukas Ruttinger, a lead author and researcher at Adelphi, a German research institute. “It will increase the fragility of states and societies worldwide, bringing with it social unrest and even violent conflict.”

A UN report last year said that by 2020 around 60 million people could move from the infertile areas of Sub-Saharan Africa towards Europe.

And by 2025, up to 2.4 billion people globally may face periods of intense water scarcity, which could in turn see 700 million people migrate to new areas by 2030.

The UK’s Foreign Office is poised to release a study on risks posed by climate change in July, RTCC learned recently.

Led by Britain’s senior climate envoy, Sir David King, meetings have taken place in the US, India and this week in London taking climate risk management as its focus.

Nick Mabey at London think tank E3G said the report would be used to track how countries’ voluntary emissions cuts can be improved and met, strengthening chances of success in Paris.

It was a “useful way to kick off,” Mabey told RTCC.

The G7, comprised of Canada, France, Germany, Italy, Japan, the UK and US, meets from 7-8 June in Bavaria.