COMMENT: NATO must be prepared for rapidly-multiplying threats, including climate change 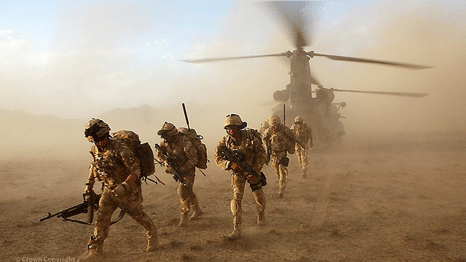 Retired US navy admiral James Stavridis, former supreme allied commander Europe, dubbed the upcoming NATO summit in Wales “the most important one since the fall of the Berlin Wall because of the clear level of multi-crises”.

Russia’s revanchist military designs in Ukraine, instability in Libya, and the implosion of the Syrian and Iraqi states, have all focused NATO’s attention on its backyard.

But despite NATO’s renewed focus on state-based threats, it’s not the same world the alliance dealt with during the cold war.

Since 1991, the world population has increased by two billion, the internet and global marketplace connect nations across democratic and authoritarian borders, and transnational threats, including cyber-security, state failure, and the proliferation of nuclear materials, litter the international security environment.

Overlaid on this landscape is climate change, a “threat multiplier” which according to the Pentagon’s 2014 Quadrennial Defense Review, places significant strains on water, food and energy security.

Is NATO ready for a multi-crisis world, exacerbated by a changing climate?

While for some it may seem strange for NATO to fret over climate change as Russian forces mass on Europe’s doorstep, today’s alliance must have the capacity to prepare for, and respond to, multiple threats – or as we say in America “walk and chew gum at the same time.”

Like threats emanating from states, threats from climate change can be unpredictable and destabilising. More extreme and frequent floods and droughts will stress the forces of NATO member states, who are called upon as first responders both inside and outside the alliance’s borders.

Stresses on food production and prices threaten fragile regions in NATO’s backyard, as well as burden member state budgets in a time of austerity.

Rapid sea ice melt is dramatically shifting the geopolitics of the Arctic region, creating new challenges for member states that border the Arctic, including the US, Canada and Norway.

Water insecurity in regions of strategic concern to NATO, such as North Africa and the Middle East, is contributing to the devastation of crops and livestock and widespread displacement of peoples.

These cascading disasters associated with climate change could diminish the capacity of a NATO whose forces and budgets are strained. If left unchecked, these dynamics could fray the bonds that hold the alliance together – just when those bonds are needed most.

In 2008, as secretary general Jaap de Hoop Scheffer’s term drew to a close, he said: “Climate change could confront us with a whole range of unpleasant developments — developments which no single nation state has the power to contain.”

Since then, NATO has done little to address those challenges, all while climatic risks have increased.

Despite legitimate competing priorities, NATO has a responsibility to address the climate threat head on.

The good news is that NATO doesn’t have to start from scratch.  The US military – leader of NATO’s military command structure – has been proactive in addressing the climate threat, as highlighted in the 2014 Quadrennial Defense Review, the DoD Arctic Strategy, and robust statements by defense secretary Hagel.

NATO secretary general Anders Fogh Rasmussen laid out a robust list of objectives for the alliance and its member states in 2009, which remain relevant today.

The alliance has held workshops on the issue, such as one in 2010 which led then supreme allied commander admiral James Stavridis to warn that climate change could spur conflict in the Arctic if steps were not taken to avoid that “icy slope.”

This lays the groundwork for NATO to make bold decisions on climate change, without taking its eye off other pressing concerns. Here’s the low-hanging fruit:

Such actions will save NATO member states money and lives in the future. Being adequately prepared for climate-related risks will bolster NATO’s resilience, ensure the adequacy of forces when responding to more traditional threats, avoid the higher costs of responding to such threats post facto and with minimal preparation, and enhance the ability of NATO to manage low probability and high impact threats in the future.

As distinct from more unpredictable security threats, climate change projections have actually given us considerable advanced warning of the range of probable outcomes to expect.

But as the scientific research confirms, climate change is not a future threat. It’s here, and it is changing the very nature of the global security landscape.

Institutions like NATO therefore have a shrinking window of opportunity in which to develop a strong, durable and climate-resilient force. Success in this objective could go a long way towards shaping regional and global responses to emerging threats.

In short, the 21st century demands a multi-tasking NATO, capable of fending off threats from many directions. And climate change, the consummate threat multiplier, cannot be ignored.

Caitlin Werrell is co-founder and director, Center for Climate and Security

Francesco Femia is co-founder and director, Center for Climate and Security